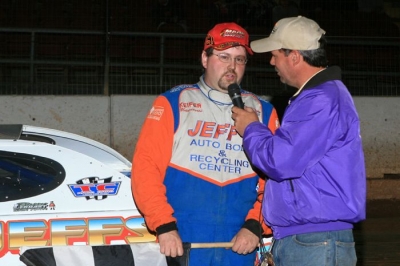 BEDFORD, Pa. (May 25) — Jeff Rine of Danville, Pa., won the T.C. Warehouse-sponsored Late Model Spring Championship at Bedford Speedway to capture his first-ever victory on the Mid-Atlantic Championship Series. Rine fought off challenges from Gary Stuhler of Greencastle, Pa., Rick Eckert of York, Pa., and Jason Covert of York Haven, Pa., to lead all 50 laps on the 5/8-mile oval and earn $5,000. Stuhler, Eckert and Covert finished in positions 2-4 while Steve Everhart of Hollidaysburg, Pa., rallied after winning a consolation race and a lap-22 spin to finish fifth in a race slowed by six cautions. | Slideshow

Rine, who started outside the front row, got the initial jump on the polesitting Eckert and edged away until he hit lapped traffic after 10 laps. Eckert closed on the leader while Covert and Stuhler moved into contention, as well. A lap-22 caution for Ron Delano Jr. bunched the field, and Covert raced into second on the restart. Eckert pushed up exiting turn two, allowing Stuhler up to third. Before long, Stuhler battled past Covert to take second. Rine stayed in command and Stuhler was never able to mount a serious charge in the second half of the race. Rine took the checkered flag with his fist out the driver's side window.

Notes: The winning No. 92 is sponsored by Metzler Auto, Truck & Trailer. ... None of the six cautions were for serious incidents, but Bo Feathers, Scott LeBarron, Doug Horton and Jack Pencil got together exiting the fourth turn for a mid-race scramble. ... Scott Haus worked his way into the top five midway through the race but ended up sixth. ... D.J. Troutman, fresh off his first career Hagerstown (Md.) Speedway victory the previous night, spun to bring out a lap-36 caution. ... Among drivers failing to make the feature: Fast qualifier Donald Lingo Jr., Kirk Ryan Jr., Tony Lombardi, Chuck Clise, Eric Zembower and Chris Harr. ... The next MACS event is June 14 at Virginia Motor Speedway in Jamaica, Va., where the Summer Sizzler pays $7,000 to the winner.