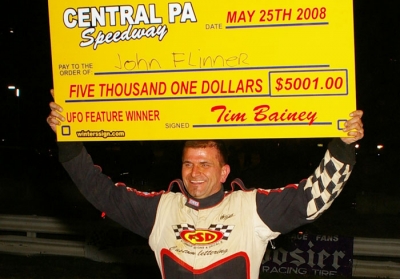 CLEARFIELD, Pa. (May 25) — Charging up from his 24th starting spot and surviving an early spin, John Flinner of Zelienople, Pa., led the final 17 laps of Central Pennsylvania Speedway's Grizzly 51 for a $5,100 victory on the Unified Force Race Championship tour. Flinner, the last of four leaders, overtook Gregg Satterlee on the 35th lap and led the rest of the way in the caution-plagued event. John Britsky of Indiana, Pa., who led laps 7-9 after starting 11th, finished second followed by 21st-starting Jared Miley of South Park, Pa.. Mike Blose of Dayton, Pa., back after undergoing shoulder surgery, was fourth and UFO points leader Alex Ferree of Saxonburg, Pa., was fifth after a flat tire with 10 laps remaining. Satterlee caused a lap-37 caution and was listed eighth in a race where only five of 28 starters were running at the finish on a new clay surface.

Polesitter Sam Stile took the lead at the outset, but Britsky's outside move following a lap-six restart put him out front. But Satterlee, who started 16th, was in the top five in the early laps and moved up to grab the lead on the 10th lap. Satterlee began building up a comfortable lead while Ferree ran second and Flinner was working his way to the front. Flinner's charge was derailed, though, when Britsky got out of shape on the 13th lap, causing Flinner to spin.

With Satterlee still in control, but Flinner didn't take long to get back into contention as he was back in the top five by lap 16 after a lap-14 pileup triggered by fourth-running Shawn McGarvey's blown engine on the backstretch scrambled the field. Flinner took the second spot on lap 23 and a challenged for the lead soon developed. When Satterlee got boxed in amid lapped cars on lap 33, Flinner took advantage and went into the lead for good with 17 laps remaining. While Flinner pulled away, Britsky won the tight battle for second among his pursuers over the final laps.

Notes: The night's racing was sponsored by DelGrosso Foods and DelGrosso’s Amusement Park. ... Mike Blose finished fourth despite pitting twice for flat tires. ... There were 10 cautions over the first 18 laps and only 11 of 28 starters were running at that point. ... Among drivers failing to make the feature: Mike Johnson, Chris Rhodes, Dwayne Taneyhill and Jerry Redden. ... Jeremy Ohl was taken to Clearfield Hospital to be checked out after a hard heat-race crash that also involved Jason Walker; his condition was unreported. ... The next UFO event is twin 30-lappers on June 1 at Pittsburgh's Pennyslvania Motor Speedway in Imperial, Pa.; the next stop at Central Pennsylvania is July 3 for the $7,000-to-win Yankee Doodle.