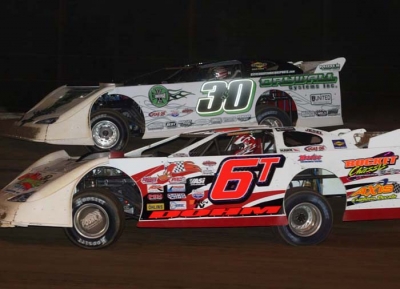 CONNEAUT, Ohio (May 23) — Third-starting Tim Dohm of Cross Lanes, W.Va., overtook front-row starter Steve Shaver of Vienna, W.Va., on the 32nd lap at Raceway 7 and led the remainder of the Independent Racing Series event at the 7/16-mile oval. Dohm collected $5,000 for his first victory on the series he plans to follow this season. | Slideshow

Shaver led from the outset with Dohm, Andrews, Ron Davies and Frank in pursuit. When Shaver and Dohm entered lapped traffic on the 27th lap, things tightened up and they crossed the start-finish line side by side on lap 30. Shaver nosed ahead on lap 31, but Dohm took control for good on the next lap.

Notes: The 47-year-old Dohm drivers a Rocket Chassis sponsored by Dohm Cycles. ... Cautions flew for Dutch Davies (got too high in turn two), Ryan Markham (spun into the turn-three fence on lap 41) and Tony Lombardi (stalled on lap 45). .... Donnie Moran's fast qualifying time of 17.103 seconds lowered the 2000 record of Randle Chupp (17.464 seconds). ... Among drivers failing to make the feature: Mickey Wright, Chad Ruhlman, Brent Rhebergen, Wally Fox, Josh McGuire, Bump Hedman and Matt Urban. ... Dick Barton won the night's Fastrak Crate feature for his second in a row in the division. ... IRS competitors continue Memorial Day weekend racing in Ohio at Muskingum County Speedway on May 24 and Cannonball Motor Speedway on May 25. Both events pay $5,000 to the winner.