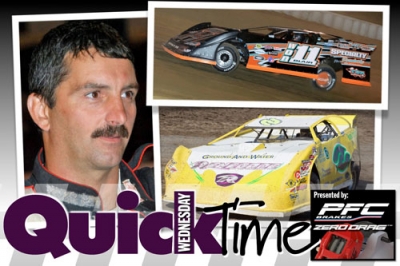 Perfection over a calendar month is a rarity in Dirt Late Model racing, where rugged competition, mechanical failure, uncooperative weekend dates — or the finicky racing gods — usually keep drivers from keeping their records unspotted for 30 or 31 days.

But Rob Blair is most notable among at least three drivers in July who pulled off such a feat as the 43-year-old from Titusville, Pa., reeled off eight victories during the month without a single loss. Blair clicked off an average of two victories per week at three tracks, winning a pair of NDRL's ULMS Racing Series events and six weekly races amid a standout 15-victory season. | Blair's impressive season

Blair’s perfect-July club also included Trevor Glaser of Tangent, Ore., whose record was unblemished in five races at Willamette Speedway and Cottage Grove Speedways, including twice in 100-lappers. (Alaska driver Shawn Hutchings was also perfect with four victories at Twin City Raceway in Kenai, but he competed in fields of a half-dozen cars or fewer and once won, in part, because his four other competitors all retired).

As with most records in Dirt Late Model racing, it’s tricky to find a list — or even one, to be honest — of drivers who have recorded perfect months, although you’d think Scott Bloomquist or Billy Moyer might’ve pulled it off, or Hall of Famers such as Jerry Inmon or Buck Simmons during seasons of 50 or more victories.

Among touring drivers in recent seasons, Jimmy Mars of Menomonie, Wis., won six of eight starts in June 2009, finishing no worse than fourth. Not quite perfect, but a record most drivers would envy.

Do you remember a perfect month for a Dirt Late Model driver? Send us a tweet @DirtonDirt or message our Facebook page.

We shouldn’t have been surprised that Jonathan Davenport of Blairsville, Ga., captured the Tazewell (Tenn.) Speedway finale on the Schaeffer Oil Southern Nationals Series while wrapping up the title.

After all, it was the fifth time in nine series that the champion captured the last points race (all of them at Tazewell). Davenport also pulled off the feat with his first title in 2010, while Chris Madden of Gray Court, S.C., did it three times in 2007, ’08 and ’12.

The trend of five such instances in nine years is far higher than other currently operating tours with no other tour even approaching that percentage. As a matter of fact, only three series have at least as many five drivers who have won finales the years they won a series championship.

Leading the way is the IMCA-sanctioned Deery Brothers Summer Series with nine finale champions over 26 seasons. Tied with the Southern Nationals with five apiece is the National Championship Racing Association and UMP DIRTcar Summernationals.

Here’s how it stacks up with other currently operating tours that have completed at least five seasons, listed in order of seasons where champions won points finales:

1 - Northern LateModel Racing Association: Once in 14 seasons with Mike Balcaen (2000).

From the page of Benton (Mo.) Raceway Park:

“This is to a certain person or small group of people who were in the stands Friday night. There was a young man at the races with 2 children who was ridiculed, called names and had things thrown at them. If you were the person doing this, you know who you are, you should be ashamed. This was a potential new race fan, which we desperately need if this track is gonna survive. This type of action is discouraging to someone who comes to check out our facility and beloved sport. If I get confirmation on who did this, and I have some ideas, you will be officially uninvited back to the track.”

From the page of Union County (Ind.) Speedway:

Aug. 7, 1986: En route to the first of back-to-back championships on the USAC Late Model tour, Billy Moyer of Batesville, Ark., raced to victory at Santa Fe Speedway in Hinsdale, Ill., in a race shown live on ESPN.

Aug. 4, 1996: Dick Barton of Ashville, N.Y., avoiding potential late-race trouble with lapped traffic on single-groove track, hung on for a $5,000 victory in a race celebrating the 35th anniversary of Eriez Speedway in Hammett, Pa.

Aug. 7, 2003: Jason Croft of Woodstock, Ga., celebrates his 21st birthday at Dixie Speedway with his first-ever Late Model victory at his hometown track.

July 31, 2008: Steve Francis of Ashland, Ky., led all 24 laps of a fog-shortened race at Bedford (Pa.) Speedway for a $7,000 victory on the Lucas Oil Late Model Dirt Series. Francis took the checkers ahead of Earl Pearson Jr. and Josh Richards in the inaugural Paul Beamer Memorial.

Aug. 1, 2011: The Oregon-based DAA Northwest Extreme Series suspended driver Jimmy Schram for one race for misconduct at Sunset Speedway Park in Banks, Ore. Schram rammed the car of winner Greg Walters — a car he owned — in a retaliatory move after the checkered flag fell. Schram was also fined $500 and put on probation.

• The 100-lapper will have a first-time winner.

• An Illinois driver will set fast time either Thursday or Friday night.

• Five World 100 winners will finish among the top 10 of Saturday’s finale.

• Jared Hawkins of Fairmont, W.Va., will be the best finishing driver from among Fans Fund invitees in the 100-lapper.

(Last week: Three out of four predictions correct; one rained out)