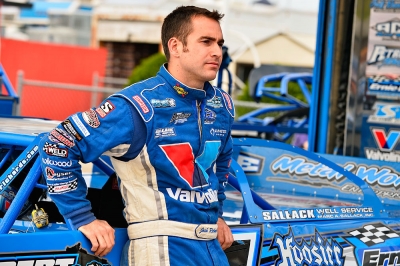 Josh Richards has good reason to be anxious about visiting Cedar Lake Speedway this weekend for the 26th annual running of the USA Nationals.

Well, the 25-year-old sensation from Shinnston, W.Va., actually has several good reasons, not the least of which is the fact that he didn’t get a chance to defend his 2011 USA Nationals victory in last year’s crown jewel event.

“Cedar Lake was definitely one of the races I missed going to the most last year,” said Richards, who spent the ’12 USA Nationals weekend competing in a NASCAR Nationwide Series event at Iowa Speedway in Newton, Iowa. “I love that racetrack and that event. It’s not only one of my favorite tracks to drive on and pays $50,000 to win, but I also have a lot of good memories of that racetrack from when I was growing up to now so it’s definitely, by far, a special place for me.”

With Richards returning to full-time WoO action this season after focusing on NASCAR stock-car racing for most of 2012, he will make his first start at the 3/8-mile, high-banked Badger State oval since he registered the most prestigious win of his career in the ’11 USA Nationals. He’ll join his friendly WoO rival Darrell Lanigan of Union, Ky., who captured last year’s USA Nationals for the first time, among favorites at Cedar Lake’s summer spectacular Aug. 1-3, which this year opens with a 30-lap, $6,000-to-win WoO preliminary Thursday before Friday’s preliminaries and Saturday’s $50,000-to-win finale.

Richards’s history at Cedar Lake dates back to his days as a skinny kid traveling the national dirt Late Model circuits with his father Mark, who fielded his iconic Rocket Chassis house car for some of the sport’s top names before Josh climbed behind the wheel in 2004. Mark Richards entered the USA Nationals a couple times in the late ‘90s with West Virginia driver Tim Hitt and won the race in 2000 with Pennsylvania standout Davey Johnson — a victory that brought Josh Richards to Cedar Lake’s winner’s stage for the first time at the age of 12.

After becoming a USA Nationals champion himself 11 years later, Richards stood in virtually the same vicotry lane spot he did with Johnson and specifically referenced that race in postrace remarks.

“Back in 2000 whenever Davey Johnson was driving for us I remember coming here and watching the (USA Nationals),” Richards said two years ago. “I was just in awe. I just fell in love with this track at a young age.”

That 2000 Cedar Lake experience with his father and Johnson remains an indelible moment in Richards’s life.

“I remember sitting up there in the stands off turn two and watching Davey run the cushion for a hundred laps,” said Richards. “That was probably one of the races I remember most from when I was younger before I was racing. That’s really about the time I started taking a big interest in racing and really wanting to drive, so you could say that race kind of lit the fuse on my passion for racing.”

Richards also learned something about the fast way around Cedar Lake Speedway during that visit. Five years later, when Richards, then a WoO rookie, made his first competitive start at Cedar Lake in the 2005 USA Nationals, the 17-year-old, soon-to-be high-school senior proved to his dad that had been taking careful mental notes.

“I actually thought we were gonna win it in ’05 with Josh,” said Mark Richards, fondly recalling the ’05 USA Nationals that was run over the 60-lap distance and paid $40,000 to win. “He beat (Scott) Bloomquist in the heat race but got a bad draw in the dash and ended up starting 15th in the race. Then he drove up through there just about like Davey did it in 2000. He was up to third and passing for second place with like 15 to go but we ended up getting a flat tire (and finishing 12th).

“We were all a little disappointed about losing a shot at the win like that, but he still did a great job. When he got out of the car I asked him, ‘How did you know how to run that cushion like that?’ He said, ‘I watched Davey do it. I remember how Davey ran this place.’

“That was pretty neat,” Mark continued. “He was 12 years old watching Davey race, and he came back five years later and drove like that. He just watched and remembered how Davey drove the place. That was all him. Nobody told him how to run like that.”

Richards didn’t get another shot at USA Nationals glory until 2010, when the WoO LMS returned to sanction the event. He was a serious contender in that 100-lapper until engine woes knocked him out on lap 18 while running second (he finished 23rd).

Finally, in his third USA Nationals attempt, Richards broke through in 2011. He passed race-long pacesetter Jason Rauen of Farley, Iowa, for the lead on lap 78 and never looked back en route to the richest race win of his already sparkling career.

The elder Richards couldn’t help remembering 2000 after his son added his name to the all-star list of USA Nationals winners.

“Any time Josh wins a race you start thinking, It ain’t all that long ago when he was just a kid riding along in the truck,” said Mark Richards. “When we got up on that stage (at Cedar Lake), you think, Man, it seems like we were just up here a little while ago with Davey.”

Richards enters this weekend’s USA Nationals as a heavy favorite to duplicate his 2011 success. His ’12 performance dictates that. He’s been atop the WoO standings since the second race of the season and as of July 30 stood tied with Lanigan for winningest-driver status, with seven victories.

“I’m definitely looking forward to that race,” said Richards. “It’s an awesome atmosphere there. The race fans are great — everyone usually hangs out after the races and has a good time — the track crew does a great job with the track and the race pays real well. It’s got everything on the list checked off.

“There’s gonna be a lot of great cars there,” he added, “but hopefully we can do it again. Winning at Cedar Lake is just a great feeling.”