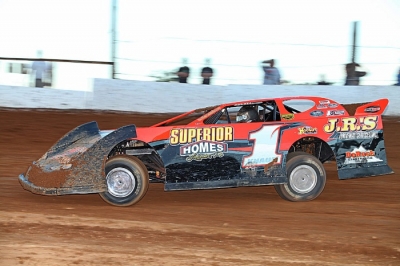 Ehrhart settled for second with Andy Fries of Mercersburg, Pa., in third. Dominic Defino of Severn, Md., and Kris Eaton of Winchester, Va., rounded out the top five at the quarter-mile oval.

Ehrhart took the lead at the outset over Kyle Merkel, though action was quickly slowed a Ralph Morgan Jr.-Steve Bailor tangle.

With Knaub dropping back early, Ehrhart was in control when another scramble developed among series points leader Andy Fries, Merkel and Patrick Bryner, ending Merkel’s race.

Ehrhart went back to work with Danny Snyder and Knaub in pursuit. Knaub took second from Snyder at halfway, then tracked Ehrhart before taking command three laps later.

Knaub pulled away over the final 10 laps for the victory for his third consecutive Steel Block Bandits victory early in the evening. He capped the night in an unsanctioned event later, picking up another $1,500 in the track’s regularly-scheduled McGee Tribute race.