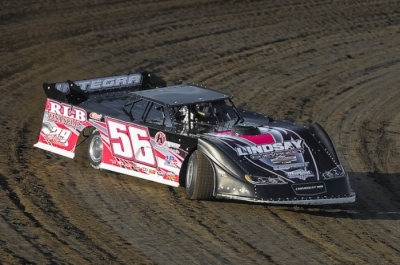 Jesse Stovall of Galena, Mo., followed Jackson to the finish of Saturday’s race for a reverse of the top-two finishers from Thursday’s MARS DIRTcar Series event at Springfield (Mo.) Raceway.

"Jesse's a real-good racer," Jackson said of his closest challenger in the race. "We race with him a lot and he's definitely the one to beat when you come to an MLRA race. I don't like to set my goals to high but to win eight races when you race with a group of guys like this ... we're having a really good season."

Brandon McCormick of Lebanon, Mo., was third with David Turner of Creighton, Mo., and Justin Wells of Aurora, Mo., rounding out the race’s top five finishers.

Jason Bodenhamer had one of his stronger runs of the season going until lap 17 when he spun in turn three attempting to avoid a stalled car. He was unable to continue and relinquished fourth position on the restart.

With just two laps remaining, fourth-running Brad Looney of Republic, Mo., had a heartbreaking end to his night as he left the speedway to give up his strong run for the night.

Fourth place was not the place to be as drivers in that position continued to suffer problems when Justin Asplin of Birch Tree, Mo., having his strongest run of the year, lost a motor down the front-stretch on the white flag lap.

With the victory, Jackson overtook Terry Phillips of Springfield, Mo., atop the MLRA points standings and now leads the points on both the MARS and MLRA tours. Jackson entered Saturday 11 points behind Phillips, who elected to skip the event in favor of the USMTS World Modified Dirt Track Championship at Deer Creek Speedway in Spring Valley, Minn.

Notes: Jackson’s Rocket Chassis has a Cornett engine and sponsorship from RLB Financial, Lindsay Chevrolet and Club 29. ... Since Memorial Day weekend, Jackson has finished among the top five in 12 of 14 events with eight victories. He posted strong showings against national competition with finish of third and second in Lucas Oil Late Model Dirt Series competition July 13 at Lucas Oil Speedway and July 20 at I-80 Speedway’s Silver Dollar Nationals. ... L.A.'s June 1 MLRA date was rained out; Friday's stop at Midway Speedway in Lebanon, Mo., was also a washout. ... The MLRA travels to Junction Motor Speedway in McCool Junction, Neb., for a doubleheader on Aug. 9-10.