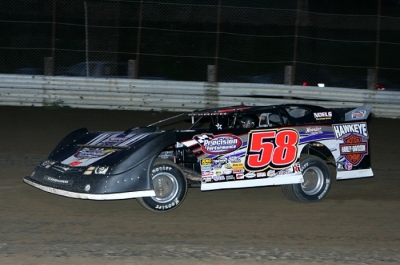 Rauen commanded from the start of the feature, riding the high side of the 3/8-mile track while Eckrich worked the low groove. After a close duel through much of the final 15 laps, Eckrich passed Rauen on the white flag to win his first CBC feature.

It was the 3rd pass of the night for Eckrich over Rauen with the first two going for naught as the yellow flag came out each time and put Rauen back out front for the restarts.

Rauen settled for second at the end of the 30-lap race with Jason Jaggers of Wyanet, Ill., third. Rick Wendling of Hazleton, Iowa, and Mike Fryer of Freeport, Ill., rounded out the race’s top five finishers.

Notes: Eckrich's sponsors include Precision Performance and Hawkeye Harley-Davidson. ... Lafayette was the third and final Wisconsin track to host the series this season. ... The track was originally slated to host the finale of a weekend tripleheader for the series, but Friday and Saturday’s races at at C.J. Speedway and Cedar County Raceway were rained out. ... Dave's brother Denny Eckrich also owns one Corn Belt Clash victory; it came Sept. 4, 2011, at Cresco (Iowa) Speedway. ... Chad Simpson entered Saturday atop the series point standings; neither he or brother Chris Simpson entered the event. ... Four August races wrap up the tour’s 2013 campaign. The series visits Fayette County Speedway in West Union, Iowa, and Jackson County Speedway in Maquoketa, Iowa, Aug. 9-10 and Marshalltown (Iowa) Speedway and Cedar County Raceway in Tipton, Iowa, Aug. 13-14.