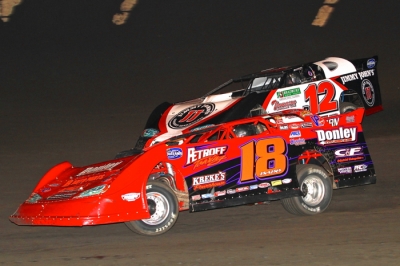 Moweaqua’s Shannon Babb led the Illinois contingent’s assault on the World of Outlaws Late Model Series event, turning the fastest lap of the four home-grown heat-race victors en route to his triumph in the fifth preliminary. Derek Chandler of Pontiac, Mike Spatola of Manhattan and Kevin Weaver of Gibson City also did their home state proud with heat victories.

The only outside drivers to break the Illinois stranglehold on heat-race checkered flags were Dale McDowell of Chickamauga, Ga., and five-time Prairie Dirt Classic winner Billy Moyer of Batesville, Ark.

The 11 WoO regulars in attendance struggled in the national tour’s first-ever visit to the quarter-mile Fairbury oval, claiming just two of the 18 total transfer positions in the heats. Chub Frank of Bear Lake, Pa. (third place in the third heat) and Shane Clanton of Zebulon, Ga. (second in the fifth heat) were the lone World of Outlaws travelers to make the cut.

Among the Outlaws who failed to qualify through a heat were the top two in the current points standings, Josh Richards of Shinnston, W.Va., and Darrell Lanigan of Union, Ky. Both drivers finished fourth in their respective heats.

In all, 13 of the 18 drivers locked into Saturday night’s $20,000-to-win Prairie Dirt Classic 100 are from Illinois – making it abundantly clear that local knowledge of the high-banked bullring is an advantage.

“The more time you put in here, the more it helps you out,” said Babb, who frequented Fairbury early in his career. “I think the thing about this place is there’s not really one certain sweet spot. I think that you can go everywhere (to race) here, so it takes a new guy coming in here a few laps to figure out where he’s at.”

Babb, who owns 10 career WoO victories but none since September 2010, is confident about his chances of keeping the Prairie Dirt Classic winner’s trophy in its home state.

“The car felt pretty good,” said Babb, a two-time winner of the Prairie Dirt Classic (2002, 2006). “I think it could’ve been better, but we started in the right place tonight – front row outside – and took advantage of it. Now hopefully we’ll make the right decisions and catch some breaks tomorrow (in the 100).”

The drive of the night was authored by 16-year-old Bobby Pierce of Oakwood, Ill., who made a stirring rally to claim the third and final transfer position in heat five. The teenage sensation – and son of five-time Prairie Dirt Classic winner Bob Pierce – was running a close third to Babb and Clanton on lap 11 when a run-in with a lapped car caused Clanton to get out of shape and led to Pierce stalling his machine on the inside of turn four. Pierce restarted at the rear and used the outside lane to charge back to third place, which he grabbed on the final circuit.

Fifty-two cars were signed in for the qualifying program, which began over an hour later than scheduled because track crews had to work overtime to sufficiently dry a track surface that was dampened by several afternoon showers.

Ohlins Shocks Time Trials were split into ‘A’ and ‘B’ groups, with the first half competing for starting positions in heats 1-3 and the second half racing against the clock to align heats 4-6.

Frank Heckenast Jr. of Orland Park, Ill., was the fastest overall qualifier, turning a lap of 12.986 seconds in Group ‘B.’ It was the first-ever WoO fast-time honor for Heckenast, who failed to qualify through his heat despite starting from the pole position.

Fairbury’s WoO card on Saturday night includes consolation races, a Non-Qualifiers’ Race and the 100-lap Prairie Dirt Classic. A full UMP Modified show topped by a $3,000-to-win feature is on the undercard of the event, which is slated to start with hot laps at 5:45 p.m. CT.

More information on the Prairie Dirt Classic is available by logging on to www.fairburyspeedway.com.

For more information on the World of Outlaws, visit www.worldofoutlaws.com.