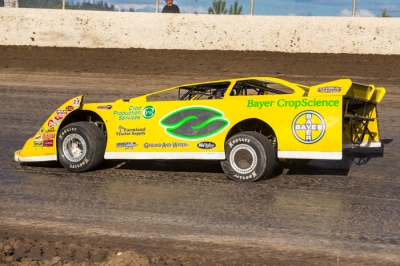 Trevor Glaser is rolling this season at Willamette Speedway. (raceimages.net)

After six Willamette Speedway championships and two DIRTcar Northwest regional titles in just over 10 years of Late Model racing, Trevor Glaser was confident he had established a pretty good driving style. But in a trip to Tucson (Ariz.) International Raceway in January, Glaser realized that his approach to driving might actually be holding him back.

“Tucson’s always kind of been my Achilles' heel,” said Glaser, the 34-year-old driver from Tangent, Ore. “We just never could quite get the handle on it. This year, we finally got close enough to kinda figure out what we were doing wrong, and I think most of it was me. I started driving a little different, and we were actually a lot better.”

Glaser’s driving style adjustments didn’t just improve his performance at Tucson’s annual January miniseries. While he’s long been one of the top competitors in the Northwest region, he’s been nearly unstoppable since kicking off the local racing season in April. He’s won 10 of 13 starts between Willamette in Lebanon, Ore., and Cottage Grove (Ore.) Speedway, including a pair of 100-lap victories in Cottage Grove’s Firecracker 100 on July 4 and a special event at Willamette on July 6.

“The change has translated to almost everywhere we go,” Glaser said. “I thought (Tucson) just didn’t fit my driving style. Now, I’m thinking my driving style may have been wrong. Our speed’s picked up everywhere, and I can’t really explain it other than the fact that I changed my driving style a little bit.”

Off to the best season start of his career, Glaser has already had two impressive streaks. He won five races in a row from May 11 through June 22, with four of those wins coming at Willamette.

The four straight victories at Willamette had Glaser eyeing the track’s record of seven consecutive Late Model victories. Glaser believes he could’ve broken the record if not for his decision to chase a $500 bonus that was offered if he could’ve won from the 20th starting spot on June 29. He almost did it, advancing all the way to fourth in the 50-lap race before his charge ran out of steam.

“I guess I got a little too big for my britches on that one,” Glaser said. “The week before we had to pit about 10 or so laps into a 40-lapper and came from the back to the front and won it. With an extra 10 laps, I figured I could make it happen, but the top groove gave up a little bit and we just didn’t have enough.”

Since the fourth-place finish on June 22 — his worst finish since returning from Arizona — Glaser has already built another streak of four straight overall. With three of those victories coming at Willamette, Glaser is already eyeing a run at the all-time record of seven in a row.

“We came back and we’ve won three in a row, so I think we would’ve had that record by now,” Glaser said. “But we’ve got a few races left, so maybe we’ll get back up there. That’d be a pretty cool record to have, so I think I would take a chance on another one of them bonuses.”

Whether he breaks the record or not, 2013 will likely go down as the best season of Glaser’s career so long as he keeps the momentum rolling, which is exactly what he hopes to do.

“It’s pretty cool,” Glaser said. “We’ve been fast and we’ve run races, but I’ve never really been in this position. I mean, everything is just clicking right now. I’ve thought I had fast cars before, but not like what we’ve got going on right now.

“We’ve never won quite like we’re winning right now. My best year up till now is 12, and we’re only two away from that. We’ve got a ways to go, so maybe we can keep winning and surpass that while everything’s going so well for us.”

• Leading the points in the quest for his 10th track title, Dick Barton of Ashville, N.Y., scored his 78th victory at Stateline Speedway in Busti, N.Y., on July 20 to move within one of Bobby Schnars on the track's all-time victories list.

• Rebounding from a last-lap loss a week earlier at another track, Michael Wright of Isom, Ky., scored a $2,500 Summer Sizzler victory July 20 at Lucky 7 Speedway in Colson, Ky.

• While trailing smoke signaled engine damage in the final laps, Donald Lingo Jr. of Millsboro, Del., held on for a July 20 victory at Delaware International Speedway in Delmar.

• Jamie Lathroum of Mechanicsville, Md., ended a 26-month drought at Potomac Speedway in Budds Creek, Md., with a $2,500 payoff in July 20’s Rumble on the River.

• Brothers from Murphy, N.C., battled up front at Dixie Speedway on July 20 with Shawn Chastain topping Johnny Chastain in the Super Late Model feature at the Woodstock, Ga., oval.

IMCA: Todd Cooney of Des Moines, Iowa, has 778 points, while Tyler Bruening of Decorah, Iowa, has closed the gap slightly at 769 points. Darrel DeFrance is third with 736 points.

AMRA: Ronnie Mayle of Chesterhill, Ohio, has jumped to the lead of the standings with 1,085 points. He’s followed by Andy Bond (1,059) of Coolville, Ohio, and defending champion Chris Garnes (1,039) of Evans, W.Va.