Quick Time: Summernationals by the numbers 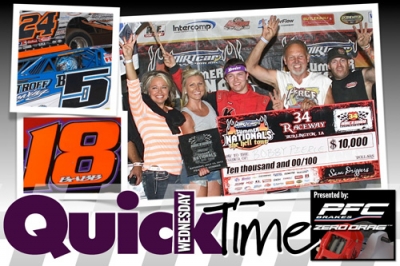 National: Two-time and reigning series champ Jimmy Owens of Newport, Tenn., ended a drought on the Lucas Oil Late Model Dirt Series with a $27,000 victory in I-80 Speedway’s Silver Dollar Nationals in Greenwood, Neb., on July 20.

Regional: On the first anniversary of his Late Model debut, Ryan Gustin of Marshalltown, Iowa, nearly shocked the world with a 34th-to-first charge at the Silver Dollar Nationals before a wreck knocked him out of the lead. Honorable mentions: R.J. Conley of Wheelersburg, Ohio (UMP DIRTcar Summernationals victory at Brushcreek and weekly win at Portsmouth); Brad Seng of Grand Forks, N.D. (NLRA victory at Norman County and weekly victory at River Cities); and Rob Blair of Titusville, Pa. ($3,000 victory at Eriez along with Raceway 7 win to continue a personal six-race win streak).

Turn 1: Summernationals by the numbers

A by-the-numbers review of the UMP DIRTcar Summernationals from June 12’s race at Brownstown (Ind.) Speedway to the July 20 finale at Oakshade Raceway in Wauseon, Ohio (with assistance from staffer Joshua Joiner):

1: Series regular who made every race without a provisional starting spot, Bobby Pierce of Oakwood, Ill.

5: Victories for three-time series champion Shannon Babb of Moweaqua, Ill., more than any other driver.

6: Cars finishing on the lead lap in Oakshade’s finale, the fewest in any series event.

11: Heat race victories for champion Brandon Sheppard, more than any other driver, but half as many as Brian Shirley in 2012.

14: Drivers scoring at least one series win, tying the record set in 2008 and one fewer than last year.

17: Number of official positions Dennis Erb Jr. of Carpentersville, Ill., advanced to win the Brownstown opener, the deepest rally of any winner.

21: Top-five finishes for Bobby Pierce, more than any other driver.

49: Drivers who entered a single Summernationals event and earned the minimum 10 points, 35 more than last season.

82: Career series victories for Billy Moyer and Shannon Babb after Babb moved into a tie for the lead on the all-time victories list.

3,646: Days between Scott Bloomquist’s previous series points race before his July 9 victory at Florence Speedway in Union, Ky. His previous points start came with a July 16, 2003, victory at the Steele County Fairgrounds in Owatonna, Minn.

Turn 2: Race report of the week

The caution-shortened Crate Late Model feature July 19 at Bradford Speedway had so much off-track drama, the race report included the dreaded “meanwhile, back on the track” phrase. Some of the best sentences after controversial contact between Garrett Mott and Brad Mesler triggered a pit area fracas that resulted in the suspension of one of Mott’s crew members:

• Foster Township Police were called to help resolve the issue. No arrests were made, but pit steward Jim Airgood made the decision to suspend the offending member of Mott’s crew for two weeks (one week for entering another driver’s pit area plus one week for the physical contact with track security).

• Airgood also reviewed relevant social media posts for a possible third one-week suspension under the track’s new social media conduct rule that prohibits disparaging comments about the Bradford Speedway or track officials on Facebook, message boards, and the like. Airgood determined that social media posts made after the incident did not warrant a further suspension.

• The two-week suspension for the member of Mott’s crew was reviewed and confirmed by track promoter/owner Jeff Andrulonis, who also noted that the offending pit crew member will be notified of his two-week suspension by a certified letter to be delivered via U.S. Mail.

I had a dream the other night that I got to announce a trophy dash between these four drivers ... wow: John Provenzano, Mike Provenzano, Jeff Provinzino, Tad Pospisil

Turn 3: Tweets of the week

Reactions to Ryan Gustin’s 34th-to-first charge at I-80 Speedway’s Silver Dollar Nationals before a wreck knocked him out of the race:

Racing Tweets! ‏@racingproblemz: Everyone just now realized how much of a wheelman Ryan Gustin is #smh he has been for a long time people!! Come on!!

DirtonDirt ‏@DirtonDirt: Tough break for Gustin, but he very well may earn $27,000 in T-shirts sales after that run. #SilverDollarNats

July 29, 2001: Former Muskogee and Tulsa Speedway promoter Stanley Durrett died at his Oklahoma home after a battle with cancer.

• John Blankenship’s streak of top-five finishes on the Lucas Oil Series will come to an end.

• Duck River Raceway Park in Wheel, Tenn., will provide the most dramatic moment on the Schaeffer Oil Southern Nationals Series.

• Rob Blair of Titusville, Pa., will click off at least two victories in three starts, giving him eight wins in July alone.