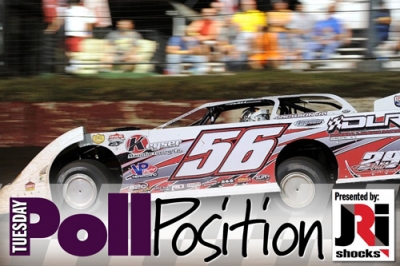 Despite taking a week off from racing, World of Outlaws Late Model Series points leader Josh Richards of Shinston, W.Va., was once again voted No. 1 in DirtonDirt.com’s latest Top 25 power rankings presented by JRi Shocks.

Richards, who has had a stranglehold on the top spot of the rankings for all but one week the regular season, gathered 15 out of a possible 21 first-place votes. Fellow World of Outlaws stalwart Darrell Lanigan of Union, Ky., polled in second for the fifth consecutive week, while receiving one first-place vote.

On the heels of a $27,000 Silver Dollar Nationals victory at I-80 Speedway in Greenwood, Neb., two-time Lucas Oil Late Model Dirt Series champion Jimmy Owens of Newport, Tenn., garnered four first-place votes and jumped up one spot to No. 3 in the power rankings. Current Lucas Oil Series points leader John Blankenship of Williamson, W.Va., slipped down one notch to No. 4 and collected the final first-place vote, while Ashland, Ky., driver Steve Francis rose two positions to No. 5 after another strong week that included a pair of runner-up finishes.

Tony Jackson Jr. (pictured) of Lebanon, Mo., leapt up five spots to No. 18 with his runner-up finish in the Silver Dollar Nationals and was one of four drivers ascending at least four positions. Other drivers making notable jumps were Chris Madden of Gray Court, S.C., who now sits at No. 19 after a five-spot surge, Brandon Sheppard of New Berlin, Ill., won rocketed up four notches to No. 11 following his first UMP DIRTcar Summernationals title, and Billy Moyer of Batesville, Ark., who is back at No. 12 this week after falling four spots to No. 16 in the previous polling.

Two previously unranked drivers made their return to the power rankings behind special event victories. Doug Drown of Wooster, Ohio, scored his first career Summernationals victory Friday at Attica (Ohio) Raceway Park and surfaced at No. 22, while Bloomington, Ill., pilot Jason Feger won Wednesday’s Lucas Oil visit to Hamilton County Speedway in Webster City, Iowa, and appeared in the final spot at No. 25.

Comment: One of many World of Outlaws regulars who will make their first-ever appearance at Fairbury this weekend. Series points: 1st (World of Outlaws). Last week’s ranking: 1st (nc)

Comment: Flying a bit under the radar on the WoO tour, he’ll look to make noise during his first trip to Fairbury. Series points: 5th (World of Outlaws). Last week’s ranking: 5th (-1)

Comment: Strong in I-80’s finale before a tangle with Jared Landers leaves him with a broken hand and a mangled race car. Series points: None. Last week’s ranking: 10th (+1)

Comment: Records perhaps his best week of 2013 in winning at Lakeside and charging from 19th to fifth at I-80. Series points: None. Last week’s ranking: 16th (+4)

Comment: A popular darkhorse pick to win at I-80, but slows to draw a lap-32 caution in Saturday’s finale. Series points: None. Last week’s ranking: 19th (-1)

Comment: Leads every lap at Attica for a $5,000 Summernationals victory, his 11th overall on the season. Series points: None. Last week’s ranking: Unranked

Comment: His first visit to Hamilton County ends with his first Lucas Oil victory; flirts with backing it up at I-80. Series points: None. Last week’s ranking: Unranked