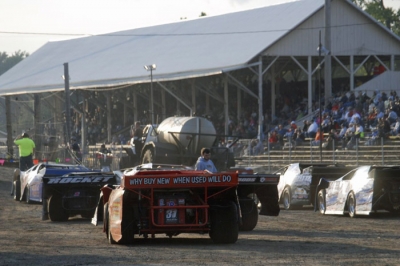 The Midwest — and specifically, the small central Illinois town of Fairbury — is ready for this weekend’s 24th annual Prairie Dirt Classic.

Anticipation is running wild for what promises to be the biggest racing extravaganza ever held at Fairbury American Legion Speedway, a quarter-mile bullring that is literally sits smack-dab in the middle of Fairbury’s nearly 4,000 inhabitants.

With the prestigious Prairie Dirt Classic moved to a mid-summer date (July 26-27) and, for the first time, running as a blockbuster $20,000-to-win 100-lapper under the World of Outlaws Late Model Series banner, it’s no surprise that interest for the event has been building at a fever pitch.

“Excitement is an understatement when it comes to this weekend. People around here just can’t stop talking about it. The town, businesses and fans alike can’t wait for this huge event.”

This weekend’s gathering in the hamlet of Fairbury will culminate a seven-month march to history for the Fairbury's promotional team. The event’s new date — it’s traditionally been run on Labor Day weekend — and major-league expansion in distance and purse were announced just after the first of the year.

“It’s time for us to go to work and make it happen for the fans,” Curl said. “I can't say how excited we are to have the World of Outlaws Late Model Series sanctioning our Prairie Dirt Classic Weekend. If everything goes as smooth as all the leg work putting this race together with them, everyone is in for a treat.”

According to Curl, all indications point to this weekend’s PDC being an unforgettable event for one of the Midwest’s most popular tracks. Advance ticket sales and the buzz in the racing community surrounding the show have Curl and Co. confidently predicting that the town of Fairbury’s population will effectively “double in size” during the weekend, which includes Ohlins Shocks Time Trials and heat races on Friday and consolation races, a non-qualifiers’ race and 100-lap, $85,000-plus Prairie Dirt Classic on Saturday.

“Not a day goes by that we’re not fielding numerous phone calls and emails from fans seeking information on the Prairie Dirt Classic,” Curl said. “A crowd like we’re expecting doesn’t happen that often, and myself, Gunner Sullivan and all the FALS directors are working hard to make the best blowout weekend possible for everyone. We want all the fans and racers to experience the Fairbury American Legion Speedway atmosphere and then go home and start counting down the days to the next Prairie Dirt Classic.”

From that group of World of Outlaws regulars, only Lanigan has ever competed at Fairbury. The only other WoO follower who has even been to Fairbury is Richards, who was 9 years old when he attended a 1997 UMP Summernationals event there with his father Mark, who entered the race with West Virginia’s Tim Hitt behind the wheel of his familiar Rocket Chassis house car.

Mark Richards actually is the World of Outlaws personality who’s made the most recent appearance at Fairbury. He entered last year’s Summernationals race at Fairbury with Brandon Sheppard of New Berlin, Ill., driving his Rocket No. 1.

Two stops at Fairbury in the last 16 years are enough for Mark Richards to understand how big this weekend’s Prairie Dirt Classic can be.

“Fairbury — that’s tradition there,” Mark Richards said. “No doubt (the Prairie Dirt Classic is) gonna be an unbelievable event. The place has a great atmosphere, it races well and the people there treat everyone great.

“I remember that the Summer Nationals show we ran there last year was crazy. We pulled in there at 2 or 3 o’clock in the morning and the gates were open for us and they brought us a big cooler packed of beer to welcome us — it was unbelievable. That’s the kind of place you want to go to.”

Besides series regulars, a large contingent of Illinois-based drivers are expected, led by 20-year-old Brandon Sheppard, who will make his first start in his home state since becoming the youngest driver in history to win the Summernationals championship.

Among the high-profile out-of-state invaders planning to compete are former race winners Jimmy Mars of Menomonie, Wis., and Brian Birkhofer of Muscatine, Iowa, who plans to race with a broken hand he suffered in an incident on Saturday night at Nebraska’s I-80 Speedway; Chris Simpson of Oxford, Iowa, who registered a career-best WoO finish of third on July 6 at Minnesota’s Deer Creek Speedway; and Kent Robinson of Bloomington, Ind.