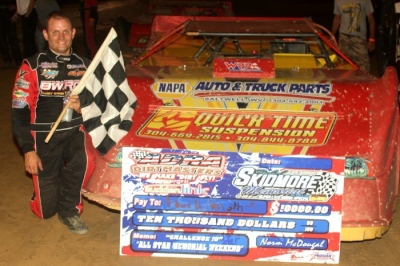 Jacob Hawkins of Fairmont, the runner-up’s younger brother, took the lead at the outset and set a ferocious pace at the 3/8-mile oval nestled in the West Virginia hills. But when he tangled with the lapped car of Skip Hare on the 15th lap, he was forced to restart on the tail after both drivers spun and triggered a caution.

Wilmoth inherited the lead and led the rest of the way while Jared Hawkins took the second spot from Benedum late in the race but ran out of laps catching the leader. Jacob Hawkins rallied back to finish eighth.

Notes: Wilmoth drives a Barry Wright Race Car with sponsorship from Midcap Land & Timber, NAPA Auto & Truck Parts and Quick Time Suspension. ... In total, the feature was slowed by three cautions. ... Along with the Hawkins and Hare tangle, Billy Brown slowed on the backstretch on lap 22 and David Watts slipped over the turn-four banking on the 37th lap to bring out yellows. ... Track points leader Tim Senic of Elkins, W.Va., was sixth in the feature. ... Wilmoth placed 13th in Friday's Jim Hitt Memorial. ... Weekly racing resumes at Elkins on July 26.