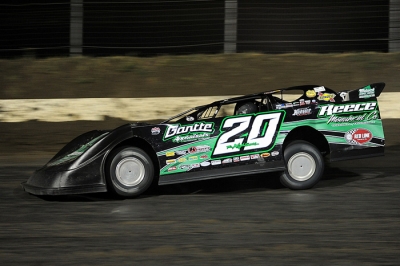 GREENWOOD, Neb. (July 20) — Jimmy Owens didn’t top the list of the most exciting drivers in Saturday’s Silver Dollar Nationals at I-80 Speedway.

But what Owens lacked in pizzazz he made up for in staying power as he churned out a workmanlike, 80-lap victory to earned $27,000 in Nebraska’s richest Dirt Late Model race. The 41-year-old driver from Newport, Tenn., steadied his quest for a third straight Lucas Oil Late Model Dirt Series championship with his first victory on the national tour in nearly two months.

Starting outside the front row, Owens led just one more than half of the 80 laps at the 4/10-mile oval, but it was enough to get the job done in taking the checkers comfortably ahead of 14th-starting Tony Jackson Jr. of Lebanon, Mo., who earned a career-high $12,000 for his best-ever series run.

“I can’t thank (car owner) Mike Reece and my whole crew, (crew chief) Chris (Fox), those guys have worked their tails off this week. It’s been a struggle the last couple of months and it feels good to come out on top,” Owens said in victory lane, recognizing the pitfalls of his competitors. “It was just a good night tonight, and we got a little lucky.”

Indeed Owens counted it lucky that the 22-year-old Gustin, who started 34th with a provisional starting spot in an event where he made his Late Model debut a year earlier, helped show him the fast way around the racetrack after taking command on lap 47.

“Tonight’s one of them racetracks you didn’t want to be starting up front, because you didn’t know how to drive,” Owens said. “And once he got by us, I could see that I was just babying the car way too much. I needed to get up on the wheel a little harder — not that I could’ve done anything with him, but I just felt like after that we got to running a little harder and we was a lot better.

“When Ryan drove by me, I was like, 'Wow, if he don’t hit the wall, he’s good.' He drove by there and caught that cushion off (the corner). I tried driving it smooth around there and couldn’t do nothing with it, so I just finally started doing that and rolled on up through there a little better. You live and learn, and you need to learn from the young guys.”

The Gustin-Owens battle brought the crowd to its feet just past the race’s midpoint, but with Owens trying to recapture the lead came the race’s most pivotal moment.

Gustin’s dramatic downfall came on lap 55 when he tried to slide up and under the slower car of home-state favorite Kyle Berck, making hard contact and then banging the wall to cause debilitating nosepiece damage on his Gressel Racing No. 19r. The impatience proved to be his demise as he retired after leading the field back to green on the restart.

“I was watching (Berck) and he ran the top every lap, and I was going to go in there and put a slide job on him,” Gustin said. “When Jimmy Owens is behind you, you’ve gotta go — there ain’t no waiting around. (Berck) just cut 'er to the bottom and that was the end of it.”

With Owens back out front on lap 56, he cruised the rest of the way, keeping Jackson’s hopes of a career-making victory in check. John Blankenship of Williamson, W.Va., who took the Lucas Oil points lead from Owens a weekend earlier, came from his 12th starting spot to finish third.

Feger led 30 of the first 42 laps while racing in high groove, but he settled for fourth after a hood pin broke and allowed an access panel in front of his cockpit to raise up, obscuring his vision. He was able to rip off the panel during a caution period, but his car was never quite the same in finishing fourth. Billy Moyer of Batesville, Ark., never contended up front but completed the top five after starting 19th in the massive 35-car field.

Owens, who clicked off his fifth series victory of 2013 and 41st of his career, first took the lead from Feger on the 10th lap, but Feger got rolling again in the high groove on a lap-21 restart to go back ahead, leading past the midway point.

“It was a little bumpier than we wanted and I didn’t like seeing that cushion up there, especially with Feger starting beside of me, because I know he can run that thing pretty good,” Owens said. But things worked out for us. We had a really good car because, we were able to maneuver and stay in the middle, and we didn’t have to rely on the cushion or nothing to go fast, so it worked out.”

Jackson moved into the top five after a lap-45 caution, but after getting to the second spot in the final 25 laps, he couldn’t quite keep up with Owens.

“We were pretty good,” said Jackson, the MARS DIRTcar Series points leader making a rare national touring start. “We went real good there on bottom, and once I got to second, I tried to follow (Owens) and I felt pretty good, but I don’t know if we sealed the tires up or what, but we were just kind of hanging on them last 10 laps.”

Blankenship survived a scare during a pre-race hot-lap session — a loose oil line on a new powerplant sent smoke billowing, but caused no damage — but never quite got into contention because of another oil issue.

“I just had an oil leak on the right rear (tire), and sometimes I’d go in there and slip real bad, and sometimes I’d go in there and stick pretty good. I never knew what I had and couldn’t hustle it too bad,” Blankenship said. “Then at the end, I got a pretty good run coming for second, I thought, and kind of got help up behind a lapped car a little bit and lost my mojo.”

Besides the departure of Gustin, the most serious of six slowdowns came shortly after a lap-32 restart when Jared Landers tried a high-side pass on the third-running Brian Birkhofer, sending Birkhofer’s car into the frontstretch wall to end his race and draw a red flag. After pulling to the pits, Birkhofer climbed from his car and angrily stormed onto the track during the caution period, banging on the door of the Landers machine as he slowly drove by.

Landers, who made a crossover move on Feger on the lap-32 restart to briefly (and unofficially) lead the race, ran in the top five until his got into the turn-four wall on lap 44, ending his race.

Notes: Owens drives a Cornett-powered Bloomquist Race Car sponsored by Reece Monument, Gantte Appraisals, Red Line Oil, Hypercoil, Sunoco Race Fuels, FK Rod Ends and Midwest Sheet Metal. ... His previous series victory paid $30,000 on May 25 at Lucas Oil Speedway in Wheatland, Mo., for the Lucas Oil Show-Me 100. ... Both races are part of the tour’s ASi Raceway Crown Jewel Cup presented by DirtonDirt.com, and Owens extended his lead in the point standings. ... Track co-promoter Joe Kosiski announced before the race that next year's Silver Dollar Nationals would pay $30,000. In addition, starting money would be raised to $1,400 from $1,300. ... Jason Krohn of Slayton, Minn., won the non-qualifiers’ race to earn $2,700, passing up a chance to start on the tail of the 80-lap feature. ... The night’s hardest wreck came when Mark Dotson got sideways on the first lap of a consolation race, sending Wendell Wallace into the turn-four wall. Wallace wasn’t injured but his car suffered heavy damage. ... Lucas Oil competitors return to action July 26-27 at Roaring Knob Motorsports Complex in Markleysburg, Pa., and Hagerstown (Md.) Speedway.