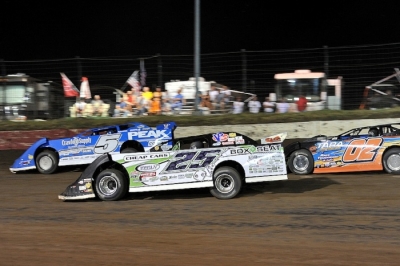 Jason Feger (25) was a heat winner on Friday. (Todd Boyd)

Feger, one of 10 heat winners in the event’s unique preliminary format with two complete sets of heat races, had the most combined passing points in his heats to lock up the top starting spot for Saturday’s $27,000-to-win main event.

Starting third in his first-round heat, Feger cruised to a victory. He backed that up with a ninth-to-second charge in his second-round heat race as he completed a successful night in his debut at the 4/10-mile oval.

Feger will start alongside Jimmy Owens of Newport, Tenn., another heat winner, with Steve Francis of Ashland, Ky. — second in his last two series starts — in the second row alongside Dennis Erb Jr. of Carpentersville, Ill., the highest passing-points earner without winning a heat race.

Notes: The event is co-sanctioned by Lucas Oil’s sister series, the Lucas Oil Midwest LateModel Racing Association. ... Mike Marlar of Winfield, Tenn., was the only heat winner not locked into the first nine rows of Saturday’s lineup; a logjam of seven drivers tied for 15th in passing points and he drew the highest number, putting him on the pole for the Saturday’s second consolation race. ... The other consy polesitter is Terry Phillips of Springfield, Mo., the MLRA points leader. ... The top three finishers from each of two consolations will transfer to the main event. ... Provisionals from the Lucas Oil Series, MLRA and Nebraska-based Super Late Model Racing Series will be added to the starting field. ... The United States Modified Touring Series was also on Friday's card with Rodney Sanders winning the feature by one length over Jason Hughes.