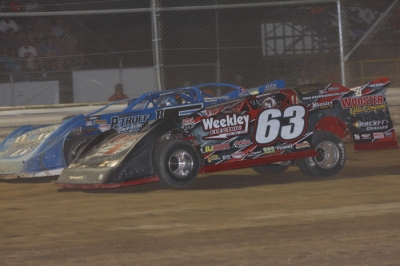 ATTICA, Ohio (July 19) — Doug Drown made the most of his first UMP DIRTcar Summernationals race of the season, claiming Friday’s 40-lap main event at Attica Raceway Park to earn $5,000 for his first-career victory on the month-long tour.

Drown of Wooster, Ohio, led every lap from the pole, but the victory was far from easy with Summernationals points contenders Brandon Sheppard of New Berlin, Ill., and Bobby Pierce of Oakwood, Ill., giving chase as the leaders raced through heavy traffic in the closing stages race. | Complete Summernationals coverage

“I knew when I saw them not to get too excited and start spinning the tires,” said Drown, who won in his first Summernationals appearance since 2011. “They’ve been pretty hot here the past month with the Hell Tour. I knew they were just as hungry, especially with their points battle going on, that they were gonna do anything they could to get the extra points and possibly the win.”

Drown turned back both of the Midwest tour’s regulars, benefitting from a caution with two laps remaining that gave him some breathing room and cleared the track ahead of him.

“It was definitely a little close for comfort,” Drown said. “I kept looking over my shoulder and saw Bobby on the bottom. I didn’t see Bobby at all, so I knew he must be tucked up under the rear of the car pretty good. I was just trying to hit my marks and not make any mistakes and just keep the thing out front.”

Jon Henry of Ada, Ohio, ran among the top five the entire race, crossing the finish line fourth in his debut behind the wheel of Keith Berner's No. 18 car. Rusty Schlenk of Weston, Ohio, advanced from the 13th starting spot to round out the top five in a race slowed by three cautions.

Sheppard, the series points leader who was looking to wrap up his first Summernationals title in the tour's second-to-last race, briefly took the lead on lap 37 before a caution one lap later gave Drown the top spot and clear track ahead of him. That was as close as Sheppard got, as he settled for second over Pierce in a close finish.

“We had him passed that one time before the caution came out,” said Sheppard, who needed to put just one more position between himself and Pierce to clinch the series championship. “If it would’ve stayed green I don’t know if we would’ve got him, but at least we were there. We made an attempt, but the caution came out.”

Drown controlled the early portions of Friday’s race, jumping to the lead over Sheppard on the initial start. Sheppard and Pierce tried to keep pace, but the high-running Drown was able to build a slight advantage as Pierce challenged Sheppard on the low side. Sheppard briefly challenged Drown on a pair of early restarts, but both times Drown again pulled away after a few laps.

But Sheppard and Pierce began to close the gap as the leaders caught traffic midway through the race, beginning a close three-car battle for the lead that saw all three cars go three wide on multiple occasions.

Sheppard took the top sot in turns one and two on lap 37, but Drown used a crossover move in three and four to retake the spot by inches at the flag stand. The two drivers were once again side by side on the next lap with Pierce lurking just behind, but a caution cooled things off just before the leaders took the two-to-go signal.

With clear track ahead, Drown pulled away on the restart as Sheppard was left to fend off a low-side challenge from Pierce.

In beating Pierce to the finish, Sheppard unofficially stretched his points leader to 48 points. He's virtually assured of claiming the series championship just by starting Saturday's finale at Oakshade Raceway in Wauseon, Ohio.

Notes: Drown’s Weekley Racing-owned Rocket Chassis is sponsored by Weekley Electric, EFCO Outdoor Power Equipment, Wooster Glass Company, DJ Directional Services and Hoosier Racing Tire. ... Drown earned his 11th overall victory of the season and the fifth of his career at Attica. ... Matt Irey spun to bring out the race’s first caution with three laps complete. A tangle between Chris Ross and J.R. Gentry back in the pack caused a lap-11 caution. Ryan Missler slowed to bring out the final yellow. ... Seventh-starting Jeep Van Wormer charged into the top five early in the race but pulled to the pit area on lap nine.

Looking for his first-career Summernationals victory, Doug Drown will lead tonight’s 22-car main event field to the green. Drown, making his first appearance on this year’s tour, drew the pole in a redraw among heat race winners. Points leader Brandon Sheppard will start second as he looks to clinch his first series title. Devin Moran will start third in his first-ever Summernationals feature with Jon Henry starting fourth. ... Unofficially, Sheppard needs to add 10 points to his points lead to in order to win the series championship just by starting Saturday’s main event at Oakshade. With a five-point difference in each position among a race’s top finishers, Sheppard only needs to finish two spots ahead of Bobby Pierce if their both among the top six. “I hope I can go ahead and get it done,” said Sheppard. “I don’t want to have to think about it at all tomorrow.” Sheppard may play it safe in tonight’s race. “I know Drown will be hard on the gas, and I don’t know if we wanna chance it and run that hard, so we’ll see what happens.” ... Third-starting Moran might not have much experience at Attica, but he’s confident his Hall-of-Fame father can help steer him in the right direction on tires and setup for tonight’s feature. “I might not have a good idea about what this place’ll do, but he sure does,” said Moran, whose team had to repair a broken hedder following the heat race. ... Henry said he’s heard some drivers talking about running a LM20 (the softest compound available to UMP competitors) tire on the right-rear for the feature, but that won’t be an option for him. “That’s a big risk to take. I only brought a 30 and 40 for the right-rear, so I don’t even have to worry about making that decision,” Henry said.

Jon Henry's persistent pressure on race-long leader Jeep Van Wormer paid off on the final lap of with Henry pulling ahead down the homestretch to win the third heat race in a photo finish. The pole-starting Wormer led the first nine laps, using high-side momentum to turn back the low-running Henry on nearly every lap. But Henry's strong run through the final corner allowed him to pull ahead and claim the victory in Keith Berner's No. 18 MasterSbilt. Van Wormer settled for second with Chris Ross and Matt Irey also transferring to the main event. A turn-one spin by Dusty Moore caused the first caution of the night with three laps complete.

Polesitter Devin Moran topped an early three-car battle with Dustin Griffin and George Lee on his way to leading every lap of the caution-free second heat. Griffin regained the second spot from Lee midway through the 10-lap prelim, then settled for runner-up finish. Lee was third, while J.R. Gentry recovered from nearly going off the track on lap two to finish in the fourth and final transfer spot. Chris Keller ran fifth the entire race but spun in the final corner.

Polesitter Doug Drown cruised in the first heat race, building nearly a straightaway advantage over runner-up Bobby Pierce in the caution-free 10-lapper. Ryan Missler was farther back in third with Rusty Schlenk grabbing the fourth and final transfer spot.

Devin Moran of Dresden, Ohio, got his UMP DIRTcar Summernationals debut started on a positive note at Attica Raceway Park, topping 40 qualifiers during time trials for Friday’s $5,000-to-win event at the third-mile oval.

In also making his first appearance at Attica, Moran, the 18-year-old son of Hall of Fame driver Donnie Moran, will start from the pole of one of four heat races coming up later in the evening. Other heat race polesitters after group qualifying: Doug Drown of Wooster, Ohio; Jeep Van Wormer of Pinconning, Mich.; and series points leader Brandon Sheppard of New Berlin, Ill.

Each of the 10-lap heat races will transfer the top four finishers into the 40-lap main event with the heat winners redrawing for their starting spots. Consolation races will send another two cars to the feature with four provisional starters rounding out the 22-car field.

Friday’s race is the second-to-last event for the month-long tour. The series wraps up Saturday at Oakshade Raceway in Wauseon, Ohio.

The series championship battle is down to two drivers with Brandon Sheppard of New Berlin, Ill., and Bobby Pierce of Oakwood, Ill., fighting to become the tour’s youngest champion. The 20-year-old Sheppard leads Pierce, 16, by 43 points enters tonight’s event. ... UMP Modifieds and 410 Sprint Cars are also in action. ... Attica is hosting its fourth Summernationals event. The track’s previous three races have also directly preceded the finale at Oakshade. Neither of the event’s past winners are in action with two-time defending race winner Shannon Babb of Moweaqua, Ill., already having dropped off the tour and 2010 winner Jason Feger of Bloomington, Ill., not competing on the series this season. ... Jeep Van Wormer of Pinconning, Mich., is making his first appearance on this year’s tour with plans to also race Saturday at Oakshade. ... Devin Moran of Dresden, Ohio, is making his Summernationals debut in his first-ever appearance at Attica. Moran, the 18-year-old son of Hall of Fame driver Donnie Moran, recently scored the biggest victory of his career in Lucas Late Model Dirt Series action at Muskingum County Speedway in Zanesville, Ohio. ... Doug Drown of Wooster, Ohio, is making his first Summernationals appearance since 2011 in the No. 63 Weekley Motorsports entry. ... Jon Henry of Ada, Ohio, a full-time competitor on the series last year, is making his first appearance on this year’s tour driving Keith Berner's No. 18 car. Henry's 12 Late Model wins at Attica is second only to Rusty Schlenk of Weston, Ohio, who has 17.