Fifth track, fifth SLMRS win for Berck at I-80 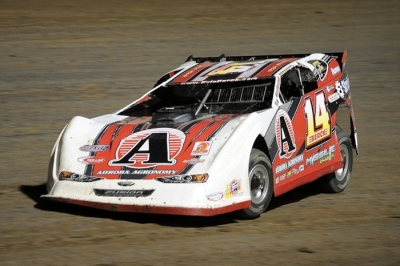 Kyle Berck heads for victory at I-80 Speedway. (Todd Boyd)

GREENWOOD, Neb. (July 18) — Taking the point when leader Bill Leighton Jr. got sideways in turn four on the third lap, Kyle Berck of Marquette, Neb., cruised the rest of the way Thursday at I-80 Speedway for his fifth victory of the season on the Nebraska-based Super Late Model Series. | Slideshow

Berck wasn’t challenged the rest of the way in racing his his series-leading 43rd career tour victory on the opening night of the Silver Dollar Nationals. He also regained the series points lead from Tad Pospisil of Norfolk, Neb., who finished fifth.

Leighton slipped under polesitter and fellow Omaha, Neb., driver Andrew Kosiski to nose ahead on the second lap, but with Berck using the high groove to take the second spot, Leighton briefly lost control in turn four.

Berck blew past to take the lead while Kosiski moved back into second as Leighton gathered up his No. 24 in third.

With Berck out of touch most of the rest of the way, Leighton and Kosiski had a battle royale for the second spot with Leighton regaining the spot before Kosiski went back ahead with eight laps remaining.

The pair — Andrew's the son of co-promoter of Joe Kosiski and Leighton is the elder Kosiski's son-in-law — tangled entering turn three on the 23rd lap with both spinning. Kosiski showed his displeasure with Leighton with a nose-to-fender love tap during the caution period.

Berck stayed in control on the two-lap shootout to the checkers while eighth-starting Craig Preble took advantage of the late fireworks to finish second. Ninth-starting Leon Zeitner of La Vista, Neb., was third while Al Humphrey of Giltner, Neb., and Pospisil completed the top five.

Three cautions slowed the action. Besides the Kosiski-Leighton tangle, Josh Krug briefly climbed the outside wall in turns three and four on the eighth lap; he was pushed to the infield pits. Mike Marushak spun around in turn two on lap 16 with Steve Kempt catching a piece of the action.

The feature came on the first of three nights of action at I-80’s Silver Dollar Nationals. Lucas Oil Late Model Dirt Series drivers battle for a $27,000 winner’s purse with the United State Modified Touring Series also in action; both divisions were practicing during Thursday’s program.