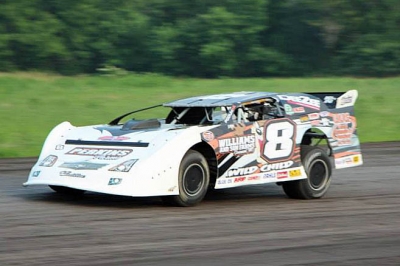 Sterling Perkins was so excited about his first Dirt Late Model victory last weekend at Adams County Speedway, the recent graduate of Lamoni (Iowa) High School said he couldn’t find the words to describe it in an interview after the race.

And while his father Tom Perkins, a former champion dirt racer himself, was proud, dad had some “mixed emotions” about the success at the Corning, Iowa, oval, 18-year-old Sterling said. | Weekly results

“He said there was some things to the car we could’ve done to make it better,” the younger Perkins said.

And so instead being satisfied with the first checkered flag for the second-year driver, the team is looking to follow it up the rest of the season and beyond. Perkins plans to tackle tonight’s Super Late Model Racing Series event at I-80 Speedway in Greenwood, Neb., and perhaps hang around for the weekend’s Silver Dollar Nationals, the $27,000-to-win Lucas Oil Late Model Dirt Series.

The team is also getting an IMCA-rules car ready to the team can compete in select spec-engine races the rest of the season.

Perkins, who works on the family farm, leaves next month for Kirkwood Community College in Cedar Rapids where he’s considering studying agriculture production. But he’ll race until then and hopefully the following summers.

“I’m planning on racing the rest of the my life if I can — if I’ve got the money,” he adds.

Tom Perkins was a successful Dirt Late Model racer until retiring a half-dozen years ago, including one season — the year Sterling was born — when he won all but one race and notched a championship at the Northwest Missouri State Fairgrounds in Bethany.

Sterling wasn’t raised in racing cars, but when he was 17, they decided to give it a shot and go ahead and start in the Late Model division. His father “figured if we started out in the Late Models because that’s what he knew ... he knows the setups and we’ve got a lot of people helping us,” Sterling said. “I took it out and didn’t do half bad.”

In Saturday’s event, rain soaked the surface just before the racing and there was plenty of traction, Perkins said. He started inside the second row, overtook the polesitter early in the race and went hammer-down in the high groove.

“I knew I had a good enough car if I held the top line,” Perkins said, who built a straightaway lead early then held off the field on a couple of restarts. “The top was just the place to be and that’s where I was. ... there wasn’t really any other places to pass.”

“It was pretty much the best time of my life right there. I was pretty speechless afterwards,” Perkins said. To get “my first win in a Late Model running against the calibers of cars there, that’s pretty cool. It’s pretty unbelievable.”

And he’ll try to follow it up with some consistency.

“I wasn’t expecting to win that one, but a win’s a win,” Perkins said. “I’ll be happy with top-fives if we can just keep up there in the points.”

• When Michael Wright’s car broke on the final lap, Chris Combs of Isom, Ky., inherited the lead July 13 at 201 Speedway in Sitka, Ky., for his second victory of the weekend. Combs won $3,000 the previous night at Ponderosa Speedway in Junction City, Ky., by overtaking Dustin Linville in the final laps.

• At Tyler County Speedway in Middlebourne, W.Va., Paul Wilmoth Jr. of Clarksburg, W.Va., swept the 25-lap twin features in the Eaton-Childers King of Ring, winning the second race after rallying from his 11th starting spot. He overtook Dusty Hamrick to lead the final two laps of the nightcap.

• With his July 12 victory at Fiesta City Speedway in Montevideo, Minn., Dustin Virkus of Clarkfield, Minn., won in his second start in a Bloomquist Race Car. He rebounded from a heat race spin caused when his steering wheel got caught in his lap belt.

• Jason Russell of Henley, Mo., had a two-victory weekend with ULMA triumphs at Callaway Raceway in Fulton, Mo., and Double-X Speedway in California, Mo.

• With his July 13 victory at Jackson County Speedway in Maquoketa, Iowa, Justin Kay of Wheatland, Mo., extended a personal winning streak to eight. The streak came to his end the next night in Deery Brothers Summer Series at Dubuque, Iowa.

• At Dixie Speedway in Woodstock, Ga., Jody Knowles of Tyrone, Ga., won his first-ever start in a new Capital Race Car on July 13.

• With a July 12 win, Josh Collins of Knoxville, Tenn., visited victory lane for the first time at Tazewell (Tenn.) Speedway. He also had a two-victory weekend with a July 13 win at 411 Motor Speedway in Seymour, Tenn.

IMCA: Todd Cooney of Des Moines, Iowa, has 777 points in stretching his lead over Tyler Bruening (761) of Decorah, Iowa. Darrel DeFrance is third with 733 points.

NeSmith Chevrolet Series: Noah Daspit of Kiln, Miss., extended his lead in Old Man’s Garage Weekly points with his ninth victory. With 673 points, he has a 33-point edge on Sid Scarbrough (640) with Derrick Mackner (612) in third.