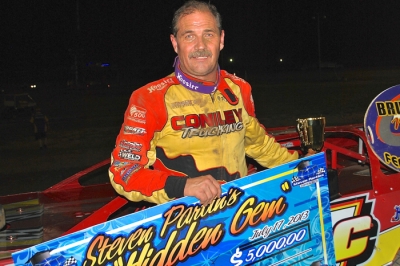 Conley controlled the early portions of the race, but he let Jameson race around him on a lap-17 restart. Once he got the lead back after Jameson’s demise, Conley didn’t make the same mistake again, using the high side of the 3/8-mile oval to hold off Johnson’s late charge.

“Jason definitely had his covered,” said Conley, who joined Pierce as the only first-time winners on this year’s tour. “I kept thinking that outside would be good, but I was afraid to try it because I was leading and you never know what’s going on behind you. Once he jumped up there, I jumped up there and I thought ‘whew, no wonder he passed me.’”

While Conley rode the topside for the second half of the race, Johnson rallied on the bottom to get to second. He almost took the lead with a couple of looks under Conley late in traffic, but he never could pull off a pass.

“He was out there in the clean air,” Johnson said. “I knew I had to do something different, so I just got down there on the bottom and hoped it lasted. We had a little motor problem early. It slicked up and that kinda helped us.”

Fourth-starting Sheppard got by Pierce for third on start of the race and took second from Griffin on lap eight. He lined up behind Conley on a lap-10 restart, but a turn-two slidejob from Jameson shuffled him back to third.

Jameson trailed Conley through a seven-lap run, never seriously challenging for the lead. A lap-17 caution put Jameson on Conley’s rear bumper for the restart, and he used a high-side charge through turns one and two to move out front.

Jameson pulled away over the next five laps, but his race came to an early end when he slowed in turn three on lap 23 and handed the lead back to Conley.

Conley led as the remaining distance ran caution free, turning back a few low-side challenges from Johnson to claim the victory.

A lap-10 caution waved when Mike Meyers of Fayetteville, Ohio, went off the track on the back straightaway. Ryan Markham of Ashland, Ohio, spun in turns one and two on the restart to again slow the pace.

Delmas Conley of Portsmouth, Ohio, smacked the wall in turn three to bring out another caution with 17 laps complete, and a turn-two spin by Tim Lance of Brimfield, Ill., caused the final caution with 37 laps down.

Brushcreek hosted the third-to-last event for the month-long Summernationals tour. After a day off Thursday, the tour wraps up with a $5,000-to-win race at Attica (Ohio) Raceway Park on Friday and the $10,000-to-win finale Saturday at Oakshade Raceway in Wauseon, Ohio on Saturday.

Notes: Conley drives a Rocket Chassis powered by a Draime Racing Engine with sponsorship from American Metal Supply Company, Conley Trucking, Cornett Building Supply and Vinyl Craft Windows. ... Thirteen cars were running at the finish with nine on the lead lap. ... Steven Partin’s Hidden Gem is a fund-raiser for a local scholarship fund for area youngsters heading to college.. ... Jackie Boggs of Grayson, Ky., broke during hot laps and did not compete the rest of the night. ... Kevin Wagner of Wheelersburg, Ohio, broke during his qualifying run.

R.J. Conley will lead the main event to green after drawing the pole in the redraw among heat race winners. Dustin Griffin will start second with Bobby Pierce third. ... With all series regulars already locked in the feature, provisionals went to Steve Kester, Rob Starkey, Daniel Williams and Chad Smith.

Mike Meyers cruised in the C-main, earning the win and a feature starting spot. Runner-up Dillon Huron and third-place finisher Ryan Markham will join Meyers in transferring to the main event.

Dustin Griffin turned back a late charge from fourth-starting Greg Johnson in leading every lap of the third and final heat race. Johnson settled for second, while Tim Lance advanced from fifth to third. Jeff Arnold and Mark Morrison also transferred to the main event. Polesitter Rob Starkey quickly faded and got into the turn-three wall to bring out the night's first caution on lap three.

Polesitter Bobby Pierce controlled the second heat, leading all 10 laps in the caution-free prelim. Pierce led by a half-straightaway at the finish, while Jason Jameson held off Ben Adkins for the second spot. Chris Garnes and Zack Dohm were fourth and fifth to also earn feature starting spots.

Second-starting R.J. Conley used a turn-three slidejob to get by polesitter Brandon Sheppard on lap three of the first heat and cruised through the remainder of the caution-free 10-lapper. Sheppard settled for second with Rod Conley, Todd Frank and Delmas Conley claiming the race's other transfer spots.

Chasing his first series championship, Brandon Sheppard New Berlin, Ill., enters the race with a 48-point lead over Bobby Pierce of Oakwood, Ill., in the series standings. ... The series is assured a first-time champion this year with three-time champ Shannon Babb of Moweaqua, Ill., officially dropping off the tour after Monday’s race at Peoria (Ill.) Speedway. Either Sheppard, 19, or Pierce, 16, will become the tour’s youngest champion ever. ... Steven Partin’s Hidden Gem is a fund-raiser for a local scholarship fund for area youngsters heading to college. ... Sheppard, Pierce and Dustin Griffin of Camp Point, Ill., are the only drivers to have entered every series event this season. Those three and Tim Lance of Brimfield, Ill., are the only Illinois drivers entered in tonight’s event. ... Scattered showers threatened throughout the afternoon, but only a few raindrops fell over the track. ... Brushcreek is hosting just its second Summernationals event. The series visited the track for the first time last season with Eddie Carrier Jr. of Salt Rock, W.Va., claiming a $5,000 victory. Carrier is not entered in tonight’s event. ... After a day off Thursday, the tour wraps up with a $5,000-to-win race at Attica (Ohio) Raceway Park on Friday and the $10,000-to-win finale Saturday at Oakshade Raceway in Wauseon, Ohio on Saturday.