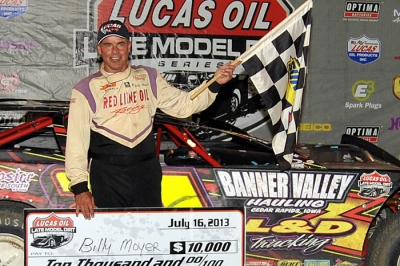 KANSAS CITY, Kan. (July 16) — On a night when a pair of Clint Bowyer Racing teammates had high hopes at the boss’s former home track, Billy Moyer spoiled the party.

The 55-year-old Hall of Famer from Batesville, Ark., took the lead from Bowyer driver Jared Landers on the 18th lap, then fought off a late challenge from another Bowyer driver, 18th-starting Steve Francis, for a $10,000 victory, his first of the season on the Lucas Oil Late Model Dirt Series. | Slideshow

Francis broke into the top five after 15 laps, worked his way into second on lap 27, and did his best to chase down Moyer. He drew closest to Moyer late in the race, but couldn’t find a way past.

The checkered flag “couldn’t have got here too soon, for sure,” said Moyer, who notched his fifth overall victory of the season. “We’ve had a rough year, a real rough last week trying to get everything done. We went back home after Wheatland and my guys just worked their butts off, and it paid off for us.”

The late charge of Francis, of Ashland, Ky., fell shy on the slick half-mile oval where his car owner, then racing out of Emporia, Kan., was a star in the modified division before entering NASCAR’s highest ranks.

Finishing third was Don O’Neal of Martinsville, Ind., who ran second early in the race, while Landers ended up fourth after leading the first 17 laps.

Moyer appeared to be in control for most of the last 33 laps, he struggled a few times lapping Australian driver Craig Vosberen, and had difficulty maintaining his momentum exiting turn two with Francis hot on his heels.

“The track, you just kind of had to keep chasing it around. I haven’t run here that much to know what was going on there,” the sixth-starting Moyer said. “You just miss things a little bit and get the tail out, and it didn’t like it, so I was trying to concentrate on keeping the thing straight and keep from buzzing the tires.

“I knew Steve started way back there, so to get to second, he must’ve been pretty good, so I knew I couldn’t be dragging my feet too much.”

Francis wishes he’d started have started near the front instead of the ninth row.

“We just dug ourselves a hold there qualifying, had a carburetor that kind of went down on us a little bit. We just struggled all night to recover from that,” Francis said. “I thought we had Billy right there with about five (laps) to go when we caught them lapped cars and I went wide and he went low. He cleared 'em and I didn’t, and that gave him enough room” to pull away.

Two cautions slowed the action. Wendell Wallace spun in turn two on the second lap to draw the race’s first yellow, then Jason Feger stopped at the top of the frontstretch on lap 30.

Pole-starting Tony Jackson Jr. of Lebanon, Mo., retired on the sixth lap. Bowyer joined his drivers Francis and Landers among entrants, but damage from a last-lap consolation race accident forced him to pass on a chance to run the main event.