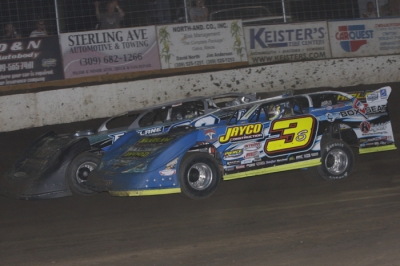 Shirley, the defending Summernationals champion who's only competing part time on this year's tour, earned $5,000 in claiming the quarter-mile oval's Summernationals event for the second straight year and the third time in his career. | Complete Summernationals coverage

“That was a long 40-lap race," said Shirley, who claimed the 12th Summernationals victory of his career. "There was a couple times I gained on Mike there and he’d pull me. We just kept digging and I started to gain on him. I new I had to hold it wide open, so I just gave it one last Hail Mary.

"That’s about how our year’s been so far. But we got the W, and that’s what matters."

A rough-and-tumble racing surface kept things interesting throughout the 40-lap feature. The pole-starting Shirley led early in the race, but he let Spatola slip by when he jumped the cushion on lap 16. The two leaders then swapped the lead a couple times over the next 10 laps before Spatola began to edge away around lap 30.

But Spatola had his own troubles negotiating the tricky track surface, allowing Shirley and series points leader Brandon Sheppard of New Berlin, Ill., to close the gap late in the race. A final push coming to the white flag allowed Shirley to nearly pull even at the flag stand, and he completed the winning pass exiting turn two for the final time.

Spatola had to fend off Sheppard through the final corner. Contact between the two drivers allowed Spatola to pull ahead exiting turn four as Sheppard went spinning down the homestretch. Sheppard's car came to rest just before crossing the finish line, but he quickly put it in reverse and backed his way to a third-place finish.

Bobby Pierce, the Oakwood, Ill., driver who entered the night 43 points behind Sheppard in the championship chase, finished fourth after holding third for much of the distance with Billy Drake of Bloomington, Ill., rounding out the top five.

Spatola scored his second top-three finish on the series in as many nights with his runner-up effort, but he felt short of ending a two-year winless streak on the series.

“I seen that five to go and I just got to focusing too had and hopped the cushion there two laps in a row,” said Spatola, who won two Summernationals events as a Late Model rookie in 2011. “It cost us. I opened the door for him to get under me there off of four. No hard feelings or anything; he did what he had to do to win.”

Sheppard's quick move to back his car across the finish line helped preserve his lead in the series standings as the tour enters its final three events.

“I don’t think I’ve ever threw it in reverse that fast,” said Sheppard, who recorded his fourth consecutive top-five finish. “The cushion was dominant. I feel like we probably had one of the best cars. It was so hard to pass and we were all three pretty close."

Peoria’s event was the tour’s final race in Illinois this year. After an off-day Tuesday, the series moves to Brushcreek Motorsports Complex in Peebles, Ohio, for a $5,000-to-win event on Wednesday. Another $5,000-to-win race Friday at Attica (Ohio) Raceway Park on Friday and a $10,000-to-win event at Oakshade Raceway in Wauseon, Ohio wrap up the tour’s schedule.

Still looking for his first victory on this year's tour, reigning series champion Brian Shirley will lead tonight's feature field to green after drawing the pole in a redraw among heat race winners. New track record holder Mike Spatola will join Shirley on the front row with Bobby Pierce starting third. ... Dustin Griffin will use a series provisional to start 19th in the main event with Jason Jaggers using a UMP points provisional to start 20th. Track provisional Steve Lance Jr. will start 21st with Bob Gardner using the second series provisional to round out the 22-car field.

Second-starting Bobby Pierce bounced his way into to turn one on the opening lap and pulled ahead of polesitter Shannon Babb on his way to dominating the caution-free third heat. Pierce built more than a straightaway advantage by the finish, while Babb held off Kevin Weaver for second. Todd Bennett was fourth with Mike Mullvain fifth. They'll join the top three in transferring to the main event.

Polesitter and defending Peoria Summernationals winner Brian Shirley led every lap of the second heat, topping points leader Brandon Sheppard in a close finish after restart with three laps remaining. Brian Diveley finished behind Sheppard in the third spot with John Gardner Jr. and Tim Lance grabbing the race's other two feature transfer spots. The race was slowed with seven laps complete when Dustin Griffin spun from the fourth spot and Gardner spun to avoid him. Gardner was given his spot back for the restart.

Mike Spatola had no problems negotiating a tricky track surface in the first of three heat races, cruising to a convincing victory in the 10-lap prelim. Spatola pulled away from second-starting Jason Jaggers to build more than a straightaway lead in the first half of the race and nearly opened another straightaway advantage over Billy Drake after Jaggers slowed to cuase a lap-seven caution. Drake was second with Randy Korte, Scott Schmitt and Adam Mefford also earning feature starting spots. Fighting an ill-handling race car as it was bounced around on the rough track surface, Jaggers ran second for the first half of the race before slowing to bring out a lap-seven caution. Steve Shannon and Russ Adams tangled in the first corner to cause a complete restart. Adams spun with one lap complete to cause another caution.

For the second straight night, Mike Spatola of Manhattan, Ill., was fastest in UMP DIRTcar Summernationals qualifying, lowering the track record Monday at Peoria Speedway with a lap of 11.911 seconds around the quarter-mile oval.

Spatola, who was also fastest in qualifying for Sunday’s Summernationals event at Vermilion County Speedway, topped 26 qualifiers in Monday’s time trials, earning the pole of the first of three heat races coming up later in the evening.

Reigning series champion and last year’s race winner Brian Shirley of Chatham, Ill., will start from the pole of the second heat while Sunday’s race winner Shannon Babb of Moweaqua, Ill., will lead the third heat to green.

Each 10-lap heat will transfers the top four finishers into the main event with the heat winners redrawing for their starting spots. Two more drivers will make the feature through consolation races with four provisional starters rounding out the 22-car starting field.

Brandon Sheppard of New Berlin, Ill., leads series standings entering tonight’s event with a 43-point advantage over Bobby Pierce of Oakwood, Ill. Three-time series champion Shannon Babb of Moweaqua, Ill., is still not quite out of the mix at 74 points back in third. ... Babb enters the event looking to become the tour’s all-time winningest driver after tying six-time champion Billy Moyer of Batesville, Ark., with his 82nd career Summernationals victory Sunday at Vermilion County Speedway in Danville, Ill. ... Most of the first half of Peoria’s season was washed out by record-breaking flood waters in mid-April that caused heavy property damage. Track owner Curt Mottaz used the setback as a chance to give the 48-year-old facility a facelift. ... The track did get one event in before the floods, with Jason Jaggers claiming a $3,000 ALMS victory during April 13’s Don Bohlander Tribute Race. ... Jason McBride is not entered in tonight's race, meaning the Carbondale, Ill., driver will miss his first race on this year's tour. ... Peoria is hosting its 13th Summernationals event. The tour has visited the series every year since 2000 except for 2003. ... Shannon Babb leads all drivers with three Summernationals victories at Peoria. He last won in 2011. ... Reigning series champion Brian Shirley of Chatham, Ill., is the defending race winner. He also won the race in 2004. ... Babb and Shirley are the only former race winners entered in tonight’s event. ... Wisconsin driver Todd Frank is taking the night off from the tour to gear up for the tour’s final three races coming up this week in Ohio. Taking the advice of his crew chief for the tour Scott James, Frank is taking the night off to go through his race car before testing Tuesday at Florence Speedway in Union, Ky.