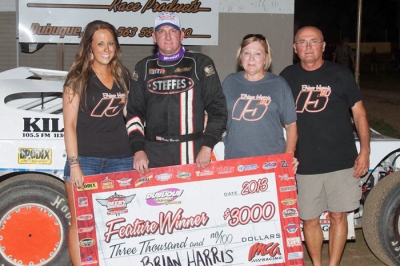 Harris led most of the IMCA Late Model tour 50-lapper from the pole but the 12th-starting Justin Kay of Wheatland, Iowa didn’t give up his own three-race series streak easily.

They traded the front spot four times over the final seven circuits, with Harris gaining the edge for the final two go-arounds after Kay missed his mark in the first set of turns.

Finally able to get some breathing room after a side-by-side battle that last most of 20 laps, Harris beat Kay to the checkers by three lengths for his fifth $3,000 checkers of the season. Kay, who saw a personal eight-race win streak fall by the wayside, was second followed by hometown driver Luke Merfeld, Ray Guss Jr. of Milan, Ill., and Dan Shelliam of Hazel Green, Wis., completed the top five. Hard charger Jeff Aikey advanced a dozen spots to seventh.

Six cautions slowed the first nine laps. Kay moved through the field slowly but surely, finally getting to second on lap 26. With Harris primarily running the top side, Kay challenged from the bottom and finally came away with the lead on lap 43.

What proved to be the final caution came out with four to go, right after Harris regained the front spot. Kay was scored first on laps 47 and 48 before getting out of his line in the first set of turns.

Harris was quick to take advantage, rocketing past and leading to the finish.

Harris has yet to finish worse than third in a series event this season, counting a record-tying four consecutive wins before Kay, the $250 Sunoco Race Fuels feature qualifier drawing winner at Dubuque, embarked on his own streak.