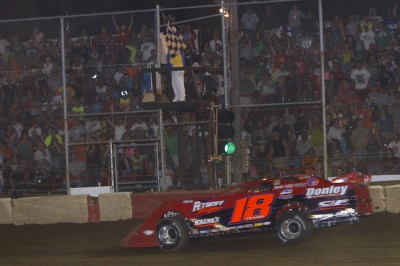 Babb's sixth series victory of the season paid $5,000 and moved him into a tie with Billy Moyer atop the tour's all-time wins list. | Complete Summernationals coverage

“That’s what keeps me going,” said Babb, who officially led laps 22-28 and 31-40. “When I have a racetrack like that right there, I stand up in my seat and like to work my race car and go at it again. That was a blast. ... I think the fans enjoyed that right there.”

The track's top groove proved to be fast early in the race with Heckenast getting the jump on Babb and pulling fourth-starting Spatola along with him into second. Heckenast edged away from Spatola and Babb in the first five laps, but it was a three-car battle for the lead by the time lapped traffic came into lap on lap eight.

Babb slipped by Spatola for second on lap 11, just as fourth-running Pierce caught the lead pack. With most of the slower cars running the middle to lower grooves, the four leaders lined up around the top of the track while running in a close line over the next seven laps.

The lead battle heated up when the leaders reached side-by-side slower cars on lap 19 and raged over the next 10 laps with Spatola and Piece each spending time out front before Babb took the lead for good on lap 31.

As Spatola and Heckenast faded out of the picture, Pierce kept Babb in his sights and began to make another serious bid for the lead when he switched his line to the bottom groove through turns one and two.

Pierce was able to pull alongside Babb multiple times in turns one and two, but the low line wasn’t nearly as quick at the other end of the track, allowing Babb to pull back ahead each lap as the two drivers continued to race through traffic.

Pierce dove hard into turn three on the final lap, but lapped car blocked his path in the bottom groove. He slid up into the middle groove through the center of the corner and nearly pulled even with Babb in turn four. But Babb's high groove won out as he pulled back ahead and raced to the victory.

“Frankie took off in the lead and that top was real good,” said Babb. “I knew when we got to traffic I’d be able to make a move on him. Then they did the same thing to me. I got in the lead, but then little Bobby put the pressure on me. It was a blast. We were able to race everywhere.”

Pierce had control of the race when he pulled ahead of Babb and Spatola to lead laps 29 and 30, but a bobble in turns one and two on lap 31 prevented him from winning at his home track.

“It was a heck of a race there the whole time,” said Pierce, who was looking for his third straight Summernationals victory after scoring $10,00 victories Friday at Kankakee County Speedway and Saturday at 34 Raceway. “I got to lead there at one point, but just got a little too lose on top there and let him get back me.”

With just four races remaining, the Summernationals tour moves to Peoria (Ill.) Speedway on Monday for a $5,000-to-win event that was rained out on June 24. An off day on Tuesday precedes a stretch of three races in four days in Ohio to close out the series.

Notes: Babb’s Victory Circle Chassis is sponsored by Petroff Towing, Donley Trucking, Kreke’s Powerhouse, Allstar Performance and PRC. ... Pierce entered the race 53 points behind Sheppard in the series standings, with Babb 89 points back in third. ... Ryan Unzicker of El Paso, Ill., was tied with Babb for third, but he dropped off the tour after Saturday's race at 34 Raceway.

Looking to rebound from a pair of disappoint results in the past two series events, Shannon Babb will lead the 22-car field to green in tonight’s 40-lap main event after drawing the pole in a redraw among heat race winners. Frank Heckenast Jr. will join Babb on the front row with series point leader Brandon Sheppard starting third. ... Dustin Griffin will use one of the two series provisionals to start 19th in the main event while Steve Thorsten got the UMP points provisonal and Kyle Madison got the track provisional. McKay Wenger will use the second series provisional to start 22nd.

Tim Lance outdueled Dustin Griffin in an early battle to claim the 10-lap C-main. Lance transferred to the main event along with runner-up Aaron Ricketts and third-place Jason McBride. Griffin pulled off late. The race was red-flagged for an opening-lap pileup started when polesitter Marvin Burton, having already dropped four spots spun in front of the field exiting turn four. The spin collected Bob Gardner, Billy Hough, Steve Thorsten, McKay Wenger and Kyle Madison. Gardner and Hough got the worst of it with Hough slamming into Gardner, sending Gardner's car airborne and leaving Hough's car with heavy front-end damage.

Series points leader Brandon Sheppard lead every lap from the pole in heat three, topping second-starting Kent Robinson by a half-straightaway at the finish of the caution-free 10-lapper. Kevin Weaver was another half-straightaway back in third with Randy Korte and Scott Schmitt claiming the race's other two transfer spots.

Polesitter Frank Heckenast Jr. topped a close battle with Bobby Pierce on his way to leading every lap of the second 10-lap prelim. Heckenast grabbed the lead on the start, while the second-starting Pierce slipped back to third when he pushed in the first corner. He quickly recovered to take the second spot back from Jason Jaggers on lap three, and a caution with four laps complete erased Heckenast's lead. The low-running Pierce pressured Heckenast the remaining distance, but Heckenast used high-side momentum to thwart each of Pierce's challenges. Pierce settled for second with Jason Jaggers, Scott Bull and Aaron Ricketts also transferring to the main event. The race was slowed with four laps complete when Steve Thorsten and Kyle Madison tangled back in the pack.

Shannon Babb took advantage of polesitter Mike Spatola's slide high off turn two on the opening lap and raced ahead to lead every lap of the first heat race. Spatola briefly pulled alongside Babb when he similarly slid high exiting turn two after a lap-two restart, but Spatola couldn't complete the pass as Babb pulled back ahead in turn three. Babb pulled away in the remaining distance, beating Spatola to the line by a half-straightaway. Brian Shirley topped Tanner English for the third spot, while Brian Diveley recovered from an early spin to grab the fifth and final transfer spot.

Looking for his first Summernationals victory since winning twice as a rookie in 2011, Spatola will start from the pole of the first of three heat races coming up later in the evening. Frank Heckenast Jr. of Frankfurt, Ill., and series points leader Brandon Sheppard of New Berlin, Ill., will lead the other two heats to green.

Each 10-lap heat will transfer the top five finishers directly into the main event with the heat winners redrawing for their starting spots. Three more drivers will earn feature starting spots through consolation races with four provisional starters rounding out the 22-car field.

Brandon Sheppard of New Berlin, Ill., is closing in on his first series title, but he’s facing an apparent late charge from Bobby Pierce of nearby Oakwood, Ill. Pierce enters his home track’s Summernationals event 53 points behind Sheppard after claiming back-to-back $10,000 victories Friday at Kankakee (Ill.) County Speedway and Saturday at 34 Raceway in West Burlington, Iowa. Summernationals veteran Shannon Babb of Moweaqua, Ill., still has an outside shot at claiming his fourth series title at 89 points out of the lead in third. Babb enters the event tied with Ryan Unzicker of El Paso, Ill., in the standings, but Unzicker has taken himself out of the running by dropping off the series after Saturday’s race. ... Pierce claimed a $2,000 Sunoco American Late Model Series victory at Vermilion County in April. ... Babb leads all drivers with five victories on this year’s tour. Sheppard and Pierce have four apiece. ... Babb is one win away from tying Billy Moyer for most wins all-time on the tour. ... Gary Christian of Broken Bow, Okla., is making his first appearance on this year’s tour. Christian, the 19-year-old racer who entered the first five events on the tour in 2011, plans to also compete in Monday’s event at Peoria Speedway. ... Vermilion County is hosting its 18th Summernationals event and first since 2010. The tour visited the track three times from 1989-91, four times from 1996-99 and 10 times from 2001-10. ... Shannon Babb leads all drivers with four Summernationals victories at Vermilion County. He last won in 2006. ... Other former winners entered in tonight’s event are Randy Korte of Highland, Ill., and Kevin Weaver of Gibson City, Ill.