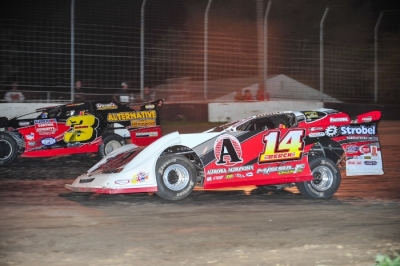 Berck’s series victory was his first of the season and 26th of his NCRA career, tying second-place Al Purkey of Coffeyville, Kan., on the all-time list; Kelly Boen is the tour’s winningest driver with 59 victories.

Justin Gregg and Wade Cross started on the front row, but it was fourth-starting Bill Leighton Jr. taking the lead on the first lap after a faulty start. Leighton was chased by Segraves and Berck early in the race, with Segraves slipped past on the ninth lap and edging away.

Three slowdowns over a six-lap stretch, including a four-car pileup on the frontstretch that drew a red flag after a lap-17 restart, hampered the action, and Leighton restarted on the tail after pitting for mechanical problems.

That put Berck on the rear bumper of Segraves for the restart, and went past on the 19th lap and led the rest of the way.