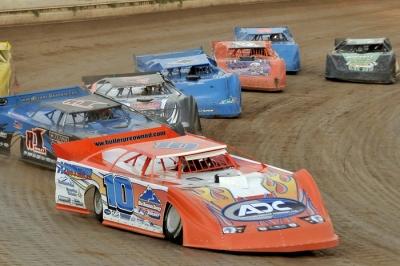 Ferree earned $3,000 in the 30-lap PENNational, taking the checkers ahead of Burgoon and Davey Johnson of Latrobe, Pa. Jared Miley of South Park, Pa., the previous week’s regular season winner at PPMS, was fourth followed by Jacob Hawkins of Fairmont, W.Va.

Burgoon shot to the lead at the outset with Keith Barbara and Lynn Geisler in tow. Giesler’s hopes ended early when his lost his left-rear wheel entering turn one, drawing a lap-three yellow.

On the restart, Burgoon pulled away, opening a half-straightaway lead on Barbara by the 10th lap with Ferree up to third. Burgoon continued stretching his margin while Ferree and Johnson dropped Barbara to fourth on lap 13.

While Barbara’s slide continued, Burgoon entered lapped traffic on lap 17, allowing Ferree to track down the leader. Rolling on the high side at the half-mile oval, Ferree closed within 10 lengths of the leader with five laps remaining.

Ferree kept motoring to the front, taking command on lap 27 on the frontstretch, then pulling away to win by a full straightaway margin.

Notes: Ferree’s Rocket Chassis is sponsored by Range Resources, Frankland Rear Ends and ADC. ... ULMS competitors return to PPMS August 17 for the Red Miley Rumble and October 11-12 for the Pittsburgher 100 weekend. ... Kyle Lukon bested 40 RUSH Crate Late Models for a $1,200 touring victory. ... Saturday was the first of four events over next ten days for ULMS competitors. ... The tour’s Speedweek kicks of July 18 at McKean County Raceway ($3,000-to-win) in East Smethport, Pa., continues on July 18 at Lernerville Speedway ($2,500-to-win) in Sarver, Pa., on July 19, and concludes July 20 at Sharon Speedway ($3,000-to-win) in Hartford, Ohio.