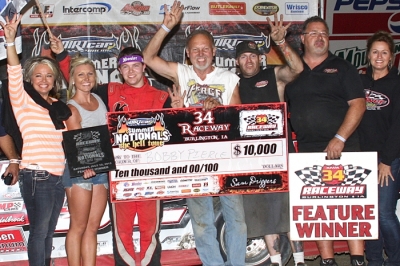 WEST BURLINGTON, Iowa (July 13) — Bobby Pierce of Oakwood, Ill., once again rode the low groove to a dominant victory Saturday night, leading the final 15 laps of 34 Raceway's UMP DIRTcar Summernationals feature for his fourth victory on the month-long series and his second in as many nights.

Much like he did Friday at Kankakee County Speedway and earlier on the tour at Lincoln Speedway and La Salle Speedway, the fourth-starting Pierce kept his No. 32 race car glued to the bottom of the racetrack throughout Saturday’s 40-lap race and overtook race-long leader Brian Birkhofer on lap 26 on his way to claiming his third $10,000 victory in a two-week stretch. | Complete Summernationals coverage

“I think once you get rolling along, you get to hard to beat,” said Pierce, the 16-year-old son of Hall of Fame racer and chassis builder Bob Pierce. “My dad choose the right tires. We were kinda debating on that the whole night, but we picked the right ones.”

Birkhofer settled for second with polesitter and series points leader Brandon Sheppard of New Berlin, Ill., third. Chris Simpson of Oxford, Iowa, was fourth at the finish with Tanner English of Benton, Ky., rounding out the top five in a race slowed by just one caution.

After initially dropping back to fifth, Pierce got rolling follow the race’s only restart on lap six and moved by Shannon Babb of Moweaqua, Ill., and Simpson for third by lap 17. He needed just a few laps to catch a close lead battle between Birkhofer and Sheppard.

While the two front-row starters had battled for most of the race up to that point, Pierce needed just two laps to pass them both. He went by Sheppard on lap 25 and took the lead from Birkhofer a lap later.

Pierce controlled the race from there, successfully negotiating slower traffic in winning by a straightaway.

Birkhofer, who ran a combination of harder-compound tires than Pierce, felt that tire choice played a large part in the race’s outcome.

“Honestly, I didn’t think the bottom would come around that well,” said Birkhofer. “We just messed up on tires. He had a good car. I just think that if we would’ve had equal tires I would’ve been able to hold him off.”

At 10:45 p.m., the program is under delay for a four-cylinder wreck. Late Models are up next. ... Ryan Unzicker will use a series provisional to start 19th in the main event,with UMP points provisional Frank Heckenast Jr. starting 20th. Track provisional Ron Elbe will start 21st, while Tim Lance will use the second series provisional to start 22nd. ... Series points leader Brandon Sheppard will lead the 22-car feature starting field to green after drawing the pole in a redraw among heat race winners. Brian Birkhofer will join Sheppard on the front row with Chris Simpson starting third. ... A broken driveshaft caused Matt Furman to slow on the final lap of his heat race. A piece of the driveshaft flew into the cockpit and hit Furman, but he wasn't seriously injured. "It's just a little sore is all," Furman said pointing to his right calf. "I'm lucky because it could've been a lot worse." Furman plans to run the consolation race. ... Ryan Unzicker dropped out of his heat race due to an ill-handling race car. Unzicker had switched back to the car that he wrecked in Friday's hot laps and was unaware that the car still had issues from the accident. ... Frank Heckenast Jr. didn't get reparis made to his car in time for his heat race after he damaged the right-rear corner of his car in qualifying. He'll start from the tail of the consy.

Rickey Frankel won an early duel with Jason McBride on his way to leading every lap of the caution-free C-main to earn the 16th feature starting spot. McBride was second while Brian Harris topped Jason Utter for the third and final transfer spot.

Second-starting Brian Birkhofer turned back Shannon Babb's strong challenge in the first five laps of the third and final heat before pulling away after a mid-race restart. Babb appeared to be quicker than Birkhofer early in the race and nearly took the lead exiting turn four on lap five. But after a caution for Billy Genebacher's spin on the next lap, Babb couldn't keep pace the rest of the way. He settled for second ahead of Chad Simpson and Randy Korte. Dustin Griffin slipped by Brian Harris in the final corner to grab the fifth and final tranfer spot. Ryan Unzicker slowed and exited the track just after the lap-five restart.

Chris Simpson took the lead when Brian Shirley pushed getting into the third turn on lap three and held off Shirley the rest of the way in the caution-free 10-lapper. The second-starting Shirley got the jump on Simpson on the start of the race and began to pull away before his lap-three miscue. He attempted to reclaim the lead with a number of low-side challenges over the next two circuits but faded in the closing laps. He settled for second with Tanner English, Todd Frank and Denny Eckrich also transferring to the main event.

Polesitter Brandon Sheppard took advantage of Bobby Pierce's slight push in the first corner and went on to lead every lap of the first of three 10-lap heat races. Pierce chased Sheppard early but faded back to nearly a straightaway behind in settling for second. Mark Burgtorf topped an early duel with Jay Johnson to grab the third spot, while Johnson and Denny Woodworth claimed the race's other transfer spots. The race caution free after officials waved off the first start. Matt Furman slowed on the final lap and was briefly attended to by safety officials while his car was pushed back to the pit area.

Each heat will transfer the top five finishers directly into the $10,000-to-win main event with the heat winners redrawing for their starting spots. Three more drivers will earn feature starting spots through consolation races with four provisional starters rounding out the 22-car field.

Brandon Sheppard of New Berlin, Ill., enters Saturday’s event enjoying a 61-point lead over Ryan Unzicker of El Paso, Ill., in the series standings. Bobby Pierce of Oakwood, Ill., is 63 points back in third after claiming a $10,000 victory in Friday’s race at Kankakee (Ill.) County Speedway. Shannon Babb of Moweaqua, Ill., who closed to within 45 points of Sheppard before a DNF in Friday’s event, is fourth, 68 points out of the lead. ... Tonight’s program will include sport-mods and four-cylinders in support division action, along with quads and pit bikes on the infield motocross track. ... Looking for his first top-five finish in seven races, Brian Birkhofer of Muscatine, Iowa leads a solid list of home-state interlopers into tonight’s event. Birkhofer, who won the tour’s most recent event at 34 Raceway in 2011, has been on a bit of slump since reeling off four straight top-three runs with the Summernationals tour between June 14-22. That streak included his victory at at Cedar Lake Speedway in New Richmond, Wis. ... Brothers Chad and Chris Simpson are among the other home-state competitors. Chris Simpson of Oxford, is riding a hot streak that included his first-ever Summernationals victory June 21 at Tri-City Speedway. In the past week, he has a third-place World of Outlaws finish, a Corn Belt Clash victory and a third-place Lucas Oil Series finish. ... Chad Simpson of Mount Vernon, is looking for his first series victory. He claimed a $4,000 victory at 34 in April that was sanctioned by MARS, ALMS and the Corn Belt Clash. ... 34 Raceway is hosting its seventh Summernationals event. The tour first visited in 1996, returned 2003-06 and again in 2011. ... Scott Bloomquist is the only two-time winner of the event. He’s not entered in tonight’s event. ... Birkhofer and Shannon Babb are the only previous winners competing. ... With his victory Thursday at Macon Speedway, Babb trails Billy Moyer by one victory on the tour’s all-time wins list. ... Denny Eckrich.of Tiffin, Iowa is making a rare UMP Late Model appearance. He claimed a $5,555 victory in IMCA Late Model action at 34 earlier this season. ... Randy Korte of Highland, Ill., has rejoined the tour for the first time since dropping off after July 7's event at Tri-State Speedway.