Combs edges Linville for $3,000 at Ponderosa 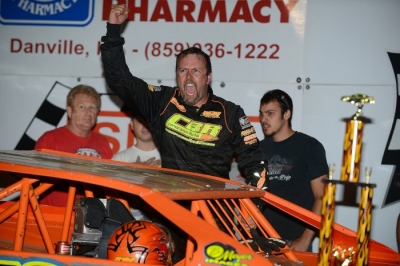 Jeff Watson of Campbellsville, Ky., led from the outset with Tommy Bailey and David Webb in pursuit, but Webb’s race ended when he slammed the turn-three wall, collecting Michael Chilton.

The sixth-starting Linville used the restart to take second from Bailey and began tracking Watson with the duo battling side-by-side from laps 10-13, when Linville took control.

After the final caution when Michael Wright shredded a left-rear tire on lap 17, Linville went back to work with Combs, who started on the third row with Linville, moving up to second and Lee in third.

The frontrunners faced lapped traffic in the final 10 laps with Combs and and Lee closing in on the leader. With two laps remaining, Linville checked up a bit heading into turn one, and Combs dove underneath. The frontrunners made contact and Linville was briefly sideways as Combs took control. Lee checked up to avoid Linville, losing two spots in the process while Combs headed for victory.