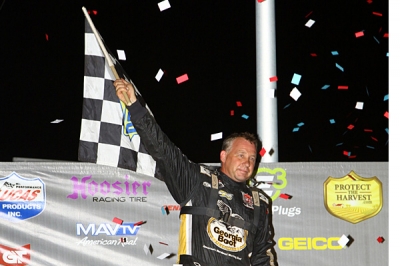 Steve Francis of Ashland, Ky., erased a season-long drought for his first series victory, while two-time and reigning series points leader Jimmy Owens of Newport, Tenn., fell out of the points lead for the first time since April 20. | Slideshow | Video

Francis, who took the lead from polesitter John Blankenship of Williamson, W.Va., on the ninth lap, led the rest of the way for his first series victory for Clint Bowyer Racing, earning $10,000 for his 12th career tour triumph.

Blankenship settled for second in the 50-lap Battle of the Beach, but that was good enough to move into the series points lead for the first time in his career after Owens was pushed to the infield before the race started with transmission problems.

Chris Simpson of Oxford, Iowa, was third followed by Don O’Neal of Martinsville, Ind., and Billy Moyer of Batesville, Ark.

“It’s just a load off to finally win one of these things this year. ... to come to Clint’s team and stuff like that, there was a lot of expectations — I probably put a lot more pressure than I needed to, and definitely more than he does,” said Francis, who joined teammate Jared Landers on Bowyer’s dirt team. “The guy gives us everything we need to go race, and says 'You’re doing everything I want, I’m the happiest I’ve ever been, you’re doing everything you want.'

“Then he called us in this week and kind of had a little meeting with all of us, and said, 'You know, you guys are doing everything right, just get your heads on straight. Get you act together and get the teams working together like they should.' No better result than this.”

Francis rode a thin cushion on the high side most of the way, nearly scraping Tri-City’s concrete wall in staying just ahead of Blankenship and surviving a late restart.

“It got a little hairy the last four or five laps,” Francis said. “We were able to hit our marks the first corner really good, and I felt like that gave me just enough of a squirt out there that I had a little room if I messed up — that he was going to be beside me, but it he was going to have to do a slider or something.”

Blankenship stuck with the middle groove in chasing Francis, but it wasn’t enough at the finish as he finished a few lengths behind at the checkers.

“I thought that one with five (laps) to go would give me a good shot, or maybe he’d make a mistake and get in the wall or something,” Blankenship said. “But, I mean, it’s Francis. It’s not somebody we don’t know, so he was just way too good. His car was a little tighter and he could pull away. ... I was lucky I finished as close to him as I did right there at the end.”

“It feels great,” Blankenship said. “I don’t know how long we’ll be able to hold onto it. We’re so tight (among) the top six, I think one race can really make the different. We’re just going to keep running the best we can. We’re doing a couple of tracks we like, a couple we don’t, so we’ll just do as good as we can and try and hold these guys off.”

Notes: Francis drove the Barry Wright Race Cars house car to his first series victory since Knoxville (Iowa) Raceway last fall. ... The BWRC is powered by a Clements Racing Engine with sponsorship from Georgia Boot, Peak Motor Oil, Cometic Gasket, Toyota and VP Race Fuels. ... Team owner Clint Bowyer is expected to join Francis and Jared Landers as a participant in Tuesday’s series race at Lakeside Speedway in Kansas City, Kan.; Bowyer was a long-time modified racer and champion at Lakeside before launching his NASCAR career. ... Francis is Lucas Oil’s 12th winner this season and won his first-ever race at Tri-City, formerly a half-mile cut down to 3/8s. ... "I told (track co-owner) Kevin (Gundaker) earlier that I liked the old half-mile better, but not now,” Francis said. ... The feature was slowed by three cautions, all for single-car issues (Michael Kloos on lap 29, Craig Smith on lap 36 and Landers on lap 45). ... Jimmy Owens had led the series points since his April 20 victory at Hagerstown (Md.) Speedway, when he took the point from Don O’Neal. ... Billy Laycock of Marine, Ill., posted his first-ever fast time on the series; he finished 15th. ... Billy Moyer Jr. of Batesville, Ark., took the Optima Batteries Hard Charger honors with a 16th-to-seventh run. ... Among drivers failing to make the feature lineup: Jason Zobrist, Jason Papich, Steve Lampley, Craig Vosbergen, Chris Shelton and Chad Zobrist. ... The series returns to action Saturday at Lucas Oil Speedway in Wheatland, Mo., for the $10,000-to-win CMH Diamond Nationals.