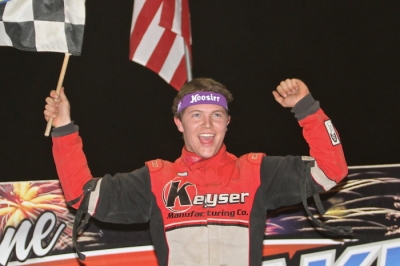 KANKAKEE, Ill. (July 12) — Bobby Pierce of Oakwood, Ill., rallied from the 11th starting spot in Friday’s UMP DIRTcar Summernationals feature at Kankakee County Speedway and dominated the second half of the 50-lap race to earn $10,000 for his third victory on the month-long tour.

Much like he did in his previous two Summernationals triumphs, Pierce used the track’s low groove to advance through the field and ran unchallenged after slipping by race-long leader Matt Miller of Whitehouse, Ohio on lap 24. Pierce built nearly a half-track advantage on his way to winning during the 20th race on the grueling Midwest tour. | Complete Summernationals coverage

“I didn’t think I was gonna be able to do it from 11th,” said Pierce, who was second in last year's Summernationals event at Kankakee. “But I was watching the track and seen that the bottom was really coming in a lot. I knew that I was good down here last year when I got second so I just had to keep doing the same thing over and over again and hitting my marks.”

Miller settled for second, coming up short of claiming his first Summernationals victory since 2008. He felt the harder-compound tires he chose to run on the left side of his car cost him the race.

“We weren’t gonna touch him. He was good and had the right tires on to run around the bottom,” said Miller. “We had a really good car. I have no complaints; we just chose the wrong left-side tire.”

Reigning series champion Brian Shirley of Chatham, Ill., advanced from the 12th starting spot to finish third in his first start on this year's tour driving his own race car after previously racing select events in one of Tim Lance's cars. Ryan Unzicker of El Paso, Ill., was fourth with series points leader Brandon Sheppard of New Berlin, Ill., rounding out the top five in race slowed by just one caution.

Championship contender Shannon Babb of Moweaqua, Ill., ran second early in the race but ended up 19th after dropping out on lap 13.

Miller got the jump on Babb on the race’s initial start, pulling third-starting Torin Mettille of Cullom, Ill., along with him into second. Miller moved to the high side on the opening lap, while Mettille challenged low and Babb made it a three-way battle using the middle groove.

The top three ran that way for the first five laps before Miller began to edge away and Babb took second from Mettille. Lapped traffic allowed Babb to catch Miller by lap eight, but a caution a lap later cleared the track ahead of the leaders.

Mettille retook second from Babb on the restart, as Babb began to fade. Babb had dropped to fifth before slowing and headed for the pits on lap 13.

While Miller began to stretch his lead over Mettille, Pierce was well into his charge through the field. Using the low groove, Pierce moved into the top five by lap 16 and used a three-wide move to get by Unzicker and Mettille and move into to second on lap 20.

It took Pierce just three laps to erase Miller’s nearly straightaway lead, and he had little trouble taking the top spot from the high-running Miller on lap 24. Pierce cruised from there, staying glued to the bottom of the track on his way to lapping all but the top six finishers.

With six races remaining, the series moves to 34 Raceway in West Burlington, Iowa, Saturday for another $10,000-to-win event.

After moving up a row when front-row starters Allen Murray and Dustin Griffin were penalized for one jumped start, Jay Morris led every lap of the 10-lap C-main to earn a spot in the main event. Glen Thompson was second while Steve Thorsten topped Herb Reich for the third and final transfer spot in a race with only four finishers. Murray and Griffin tangled on the second lap, with Griffin's car climbing on top of the hood of Murray's. The accident sent both cars to the pits with damage. Kent Robinson's rought night continued with his car trailing heavy smoke and sending him to the pit area early in the race.

Provisionals went to Dustin Griffin, Tanner English, Steve Kester and Kent Robinson. Allen Murray and Herb Reich were added to the tail of the field. ... Kent Robinson's C-main issues were due to a loose oil line. ... Kankakee used a unique redraw system, with each heat winner chipping a golf ball at a hula-hoop on the front straightaway. Matt Miller didn’t land his ball inside the hoop, but he was the closest, so he’ll start on the pole of the main event. A crew member represented Shannon Babb in the contest and putted his golf ball to second-closest to give Babb the outside pole. Torin Mettille’s severe lack of golf skills earned him the third starting spot. ... Babb was absent from the redraw contest because he was busy swapping rear-ends under his No. 18 machine. The axle tube broke late in his heat race. ... Electrical problems slowed Kent Robinson’s qualifying effort and forced him to scratch from his heat race. His crew is working to fix the issue in time for the C-main. ... A broken rear-end was to blame for Tanner English’s heat race scratch. With the issue repaired, he’ll likely use a provisional to make the main event.

Second-starting Torin Mettille used high-side momentum to power ahead of polesitter Brandon Sheppard exiting turn four on the opening lap and held off Sheppard's constant pressure the rest of the way to claim the third and final heat race. Sheppard settled for second, just ahead of Ryan Unzicker. Brian Shirley jumped from seventh to fourth on the opening lap but couldn't advance any farther. Aaron Ricketts earned the final transfer spot in fifth. Steve Kester got over the turn-two banking to bring out a lap-three caution.

Matt Miller outdueled polesitter Kevin Weaver on the opening lap and pulled away after a lap-two restart for a flag-to-flag victory. Weaver was about a half-straightaway back in second, while Mike Spatola topped Bobby Pierce in a back-and-forth battle for third. Pierce settled for fourth with Steve Dimmick finishing fifth to also make the main event. Steve Thorsten spun in turn four two bring out the race's only caution on lap two.

Shannon Babb got the jump on polesitter Frank Heckenast Jr. on the start of the first heat and led every lap of the caution-free 10-lapper. Heckenast faded to nearly a straightway back in settling for the runner-up finish with Jason McBride just behind in third. Tim Lance was fourth, while Todd Frank topped Allen Murray in a close finish for the fifth and final transfer spot.

The top five finishers in each heat will transfer directly to the main event with the heat winners redrawing for their starting spots. Three more drivers will earn feature starting spots through consolation races with four provisional starters rounding out the 22-car field.

A number of potential contenders had trouble during their qualifying runs. Debuting a new Pierce Race Car, Tanner English slowed exiting turn four on his first qualifying lap, coasting under the flag stand and then into the pit area. Driving his own car for the first time on this year’s tour, reigning series champion Brian Shirley of Chatham, Ill., pushed in turns three and four on both of his qualifying laps, putting him seventh in group three. Kent Robinson of Bloomington, Ind., never got fully up to speed for his qualifying run and pulled off after just one lap.

Brandon Sheppard of New Berlin, Ill., leads the tour into Friday’s event with a 45-point lead over three-time series champion Shannon Babb of Moweaqua, Ill., who’s won four of the tour’s past seven races after his victory Thursday at Macon (Ill.) Speedway. Ryan Unzicker (-66) of El Paso, Ill., and Bobby Pierce (-83) of Oakwood, Ill., are also both still in contention with six series races remaining after tonight's event. ... Ryan Unzicker went to a backup car after getting into the back straightaway wall in hot laps. ... After claiming his 81st career Summernationals victory Thursday at Macon, Shannon Babb enters Friday’s event with a chance to tie Billy Moyer of Batesville, Ark., for the most wins in series history. Babb has two Summernationals victories at Kankakee, including last year’s event. ... Moyer, who’s not entered in tonight’s event, leads all drivers for most series wins at Kankakee with seven. ... Kankakee is hosting its 25th Summernationals event. ... Reigning series champion Brian Shirley of Chatham, Ill., is racing his own No. 3s for the first time on the tour after previously only fielding Tim Lance’s No. 48 car in select events. ... Matt Miller of Whitehouse, Ohio, is making his first appearance on this year’s tour, racing for just the second time since his impressive showing last month at Eldora Speedway’s Dream. Miller, a two-time Summernationals race winner, plans to also run the tour’s final two events next weekend at Attica and Oakshade. ... Tanner English plans to debut a new Pierce Race Car for Texas-based Murray Motorsports in starting a three-race stretch with the series, while team owner Allen Murray is schedule to make his Summernationals debut if he can make it to the track in time from the Chicago airport. With Murray running late, Brian Shirley plans to hot lap Murray's No. 2 machine in the first group, then hot lap his own car in group three. "It's a good thing Bobby's seat is small," chassis builder Bob Pierce joked. "You'd be trying to jump in his car, too." ... English was almost late himself after his hauler broke down less than two miles from the track. A track official saw English on the side of the road and towed the team’s trailer to the track while repairs were made to the truck. ... Kent Robinson of Bloomington, Ind., is back with the tour for tonight’s event. He plans to skip Saturday’s race at 34 Raceway in West Burlington, Iowa, before rejoining the series Sunday at Vermillion County Speedway in Danville, Ill. ... Mike Spatola of Manhattan, Ill., who won Kankakee’s Summernationals event in 2011, is among tonight’s entries.