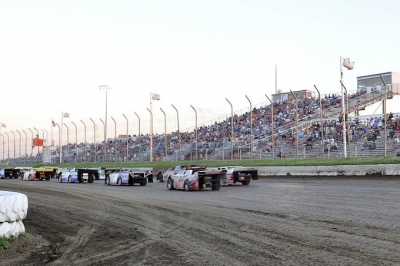 The Lucas Oil Late Model Dirt Series is set for an extended trip through the Midwest over the next eight days with five events planned in five states. The national tour will visit dirt tracks in Illinois, Missouri, Kansas, Iowa and Nebraska as it makes its farthest trip west of the 2013 season.

The tour’s western swing kicks off Friday with the Battle at the Beach 50 at Tri-City Speedway in Pontoon Beach, Ill. There will be a complete show with hot-laps, RED BUCK Time Trials, heat races and consolation races, followed by the 50-lap, $10,000-to-win feature event.

The series will then travel to Wheatland, Mo., for the second time in 2013 for the seventh annual CMH Diamond Nationals at Lucas Oil Speedway on Saturday. The event at Lucas Oil Speedway is also co-sanctioned by the Lucas Oil MLRA Series and will include a complete show with hot laps, time trials, heat races and consolation races, followed by the 50-lap, $10,000-to-win feature event. The race winner will also receive a special Diamond Ring from Lucas Oil Speedway. Both events Friday and Saturday will be filmed by Lucas Oil Production Studios to air on several television networks later this year.

The tour will take a few days off after the Diamond Nationals as it moves to the state of Kansas for Tuesday’s event at Lakeside Speedway in Kansas City, Kan. This trip to Lakeside will mark the first time the series has ever visited the pristine facility. NASCAR star and Dirt Late Model team owner Clint Bowyer will compete at Lakeside as a teammate to his two drivers Steve Francis and Jared Landers. There will be a complete show with hot laps, time trials heat races and consolation races, followed by the 50-lap, $10,000-to-win feature event. The night’s support action will include the United State Modified Touring Series.

The series will then travel to the state of Iowa on Wednesday night and compete at Hamilton County Speedway in Webster City. Hamilton County is another new venue on the series schedule. There will be a complete show capped by the 50-lap, $10,000-to-win feature event. USMTS will once again compete in support division action.

Following the two mid-week shows in Kansas and Iowa, the series returns to the state of Nebraska in 2013 on Thursday, Friday and Saturday for the running of the Silver Dollar Nationals at I-80 Speedway in Greenwood. This event gets underway Thursday with practice for Super Late Models and USMTS/ Thursday night's action includes a complete show for the Super Late Model Racing Series. the Nebraska 360 sprints, and B-mods.

On Friday, the Lucas Oil Series will run heat races lined up by pill draw and using the passing points system. Each competitor will compete in two separate heat races on Friday. USMTS mods will run a complete show Friday as well. On Saturday, Lucas Oil action will include consolation races and a non-qualifiers race paying $2,700-to-win and $300-to-start for drivers failing to make the feature event. The 100-lap Silver Dollar Nationals feature, paying $27,000-to-win and at least $1,300 to each start, caps the night.

Fans can place their pay-per-view orders now at www.dirtondirt.com/liveEvents.php. Prices for the three-race broadcast are set at $18.99 for each event for DirtonDirt.com subscribers and non-DirtonDirt.com subscribers. Two-day packages are available for the Lakeside Speedway and Hamilton County Speedway events, as well as for both nights of I-80 Speedway's Silver Dollar Nationals.

Dennis Erb of Carpentersville, Ill., winner of four series events in 2013, is currently sixth in the standings, followed by Jared Landers of Batesville, Ark., Eddie Carrier Jr. of Salt Rock, W.Va., Billy Moyer Jr. of Batesville, Ark., and Jerry Lierly of Camp Point, Ill. Moyer leads the chase for the JRi Shocks Rookie of the Year, Presented by Dunn-Benson Ford.

For the latest breaking news about the Lucas Oil Late Model Dirt Series including the 2013 tour schedule, TV schedule, drivers, sponsors and all the information about the series visit the official series website at lucasdirt.com.