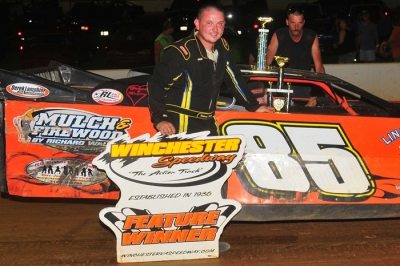 Most Dirt Late Model racers prefer to update their race cars every few years to keep their equipment fresh and to keep up with new developments. But Rodney Walls of Saint Thomas, Pa., is finding success in a race car nearly as old as he is.

“It definitely isn’t anything fancy,” Walls said of his 1994 Rocket Chassis. “The car’s nothing too fancy, but the parts on it are good stuff. It’s a little out dated, but it gets the job done.”

Walls’ victory was a much-needed improvement over his previous two weeks of racing. His well-seasoned race car was left with heavy damage following a trip to Hagerstown (Md.) Speedway on June 15 and again when he returned to Winchester on June 28.

“We had a bad night a couple weeks ago and had to get the car clipped after a tie rod broke and put us in the wall at Hagerstown, then again when we got wrecked there at Winchester,” Walls said. “We were feeling pretty down, but to come back there and win last week like we did, words can’t explain it how excited we were.”

Walls hopes Saturday’s victory was a sign of more to come as he looks to build momentum for the second half of the season. Chasing Winchester’s Limited Late Model title for the first time this season, Walls is hoping to climb from fourth in the division’s current standings.

“We decided this year we wanted to run Winchester and run for the points there, but we kind of got behind a little bit,” said Walls, who’s currently 179 points back of leader Jonathan DeHaven in the current standings. “We’re gonna have to have good luck the rest of the year. We need top five finishes and DeHaven to have a couple of bad weeks. It’s going to be tough getting to him, but we’re gonna do our best.”

Walls will rely on his older race car in his quest to catch DeHaven even though he has another option. His family-owned race team recently added a newer Rocket to the team’s arsenal, but Walls plan to stick with his trusty older car for now.

“We’re gonna stick with it as long as it’s hanging in there,” said Walls. “We check it every week to make sure nothing’s cracked or unsafe, but it’s holding together really well.

“We’re putting together an ’03 Rocket with ’06 updates, but we’ve kinda put it to the side here lately. I’ll probably switch to it eventually, but right now it’s hard to get out of the older one. It’s been really good to us, so we’ll stick with it for now.”

• Securing a two-victory Fourth of July weekend, Shawn Claar of Imler, Pa., earned $3,000 with a July 4 victory at Marion Center (Pa.) Speedway, then followed that with a July 6 victory at America’s Motorsports Park in Clearfield, Pa.ï¿½

• With July 5-6 victories, Ryan Griffith of Webster City, Iowa, had a two-win weekend in Iowa at Crawford County Speedway in Denison and his hometown Hamilton County Speedway.

• In a holiday special at Tri-County Motor Speedway, Ryan VanderVeen won July 3 at the Auburn, Mich., track for a personal three-race win streak.

• In his first start back after a December garage fire burned much of his racing equipment, Bob McMillen of St. Marys, Pa., finished third July 6 at Hummingbird Speedway in Reynoldsville, Pa. Chris Farrell won the main event.

• Rallying from the third row into the lead on the first lap, Rick Dralle of Waterloo, Iowa, dominated the July 6 feature at Independence (Iowa) Motor Speedway.

• At Hill Valley Speedway in Orbisonia, Pa., Andy Fries of Mercersburg, Pa., earned $2,500 for his victory in the Moonshine Madness feature for topless Limited Late Models.

• Winning July 6 at Willamette Speedway, Trevor Glaser of Tangent, Ore., lapped all but six cars in winning his seventh race at the Lebanon, Ore., oval.

UMP DIRTcar (Crate Late Models): Aaron Heck of Mount Vernon, Ill., continues to show the way, but Jeff Walston of Paducah, Ky., has closed the gap to just 12 points. Nick Lyons of Centralia, Ill., is third, 38 points out of the lead.

IMCA: Todd Cooney of Des Moines, Iowa, has climbed atop of the standings with an eight-point lead over Tyler Bruening of Decorah, Iowa, through June 30 events. Nick Marolf (-57) of Moscow, Iowa, has dropped to third after leading the points way a week ago.

RUSH: Dennis Lunger Jr. of Albion, Pa., has moved to the top of the first-year Crate Late Model organization’s weekly points chase with a slight four-point lead over John Over of Uniontown, Pa. Chad Ruhlman of Bemus Point, N.Y., is third, 19 points out of the lead.