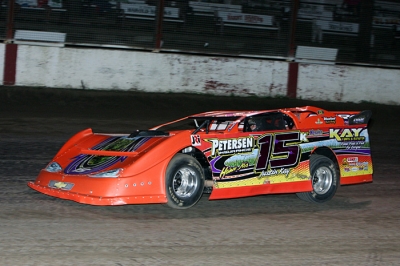 WEST LIBERTY, Iowa (July 10) — Just a week ago, Justin Kay was the driver who stopped a Deery Brothers Summer Series win streak. Now the Wheatland, Iowa, driver is a single IMCA Late Model tour victory away from the record book himself. | Slideshow

Kay won his third straight series feature Wednesday at West Liberty Raceway, leading all but the opening circuit in a 40-lap contest slowed just once by caution. The victory, also his career third, was good for $3,000.

Series points leader Brian Harris of Davenport, Iowa, who’d won a record-tying four consecutive features before Kay started his roll, finished second for the third straight night. Andy Eckrich of Iowa City made a late drive to third. Tommy Elston of Keokuk, Iowa, was fourth and Jeff Aikey of Cedar Falls, Iowa, rounded out the top five in a race postponed a day by inclement weather.

Aikey led the first lap from the pole before the third-starting Kay rocketed past. Harris started eighth and was up to second by lap 14.

That single caution came out just before midway and preceded a side-by-side duel between the front pair. Harris nearly had the edge coming to the flagstand at one point but Kay got a good run the last nine times around the track and won by six car lengths.

Harris had tied the record of four straight Deery wins, set by Gary Webb of Blue Grass in 1994 and equaled by Rob Toland of Colona, Ill., in 2004, at West Liberty on June 18.

Kay won July 2 at Independence and July 5 at Davenport before making the successful trip to West Liberty. He’ll look to match the series record himself this Sunday, July 14 at Dubuque Speedway.