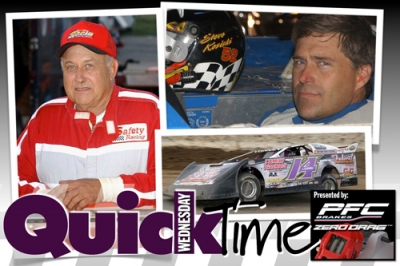 Regional: Justin Kay of Wheatland, Iowa, scored a pair of Deery Brothers Summer Series victories — his first on the IMCA tour — along with a weekly victory at his home track, Jackson County Speedway in Maquoketa, Iowa,

Weekly: Russell Erwin of Beaverdam, Va., continued his solid season at North Carolina ovals by capturing the Monk Clary Memorial at Clary’s Speedway in Brinkleyville, N.C., for $5,000 in purse money and $3,000 in lap money.

Scott Bloomquist’s surprising return to the UMP DIRTcar Summernationals on Tuesday with a victory at Florence Speedway in Union, Ky. — 10 years after his previous series victory — sent us scrambling to the record books to find the longest stretches between series victories for any driver. And here’s what we found, unofficially, for stretches 12 seasons or longer:

8,374 days (23 years): Now that’s a drought. Actually, Hall of Famer Ken Essary of Cape Fair, Mo., competed with the National Championship Racing Association relatively rarely — and then there was that 1990-96 stretch when Kansas-based NCRA was on hiatus. But it’s a long time between his July 26, 1986 victory and his June 28, 2009, victory, both at Monett (Mo.) Speedway.

5,358 days (15 years): Bloomquist’s 10-year stretch between Summernationals victories isn’t even his longest personal gap between series victories. It's deserving of an asterisk because the World of Outlaws Late Model Series was dormant for 15 years, Bloomquist won a single race on the tour's original incarnation June 9, 1989 (Superior Speedway) and again Feb. 8, 2004 (Volusia Speedway Park) when the tour’s modern era launched.

4,795 days (13 years): Moyer with NCRA. His drought from April 1, 1989 (Boothill Speedway) and May 17, 2002 (Eagle Raceway) was enhanced by not only his infrequency in competing in NCRA events, but by the seven-year dormant stretch.

With his Muskingum County Speedway last week, Devin Moran joined his father as a winner on the Lucas Oil Late Model Dirt Series. How many fathers and sons combined have national touring victories? Let’s take a look:

Jack and Jackie Boggs: The late Jack had NDRA and Hav-A-Tampa victories while Jackie has taken checkered flags with WoO and Lucas Oil tours along with Hav-A-Tampa.

Billy and Shane Clanton: The late Billy had an NDRA victory while Shane has WoO, Lucas Oil and Hav-A-Tampa (then the Xtreme Series) triumphs to his credit.

Larry and Terry Phillips: The late Larry had a WoO victory while Terry owns a Hav-A-Tampa triumph.

Turn 3: Tweets of the Week

Eric Arnold ‏@_EricArnold: CJ Speedway. We are being subjected to 1 car (truck) heat race. And it didn't finish. LOL.

Steve Casebolt ‏@caseboltc9: "All of this rain is making me wish I could swim without floaties.”

July 6, 1980: Gene McNeely of Charleston, W.Va., steered his No. 20 to victory lane at Pennsboro (W.Va.) Speedway for his first win on the All Star Circuit of Champions.

July 6, 2011: John Lovas of Forest Hill, La., at one-time a popular dirt racer known as the Racing Schoolteacher, died at home. The winner of the 1995 SUPR Star Invitational at Lone Star Speedway was 74.

• One of the four national tour (World of Outlaws or Lucas Oil) winners from July 11-13 will win his first series race of the season.

• Tony Jackson Jr. of Lebanon, Mo., will go winless for the first week since late May.

• The Michigan Dirt Cup will have two first-time winners on July 12-13 at Mount Pleasant Speedway and I-96 Speedway.

(Last week: One out of four predictions correct; one rained out)