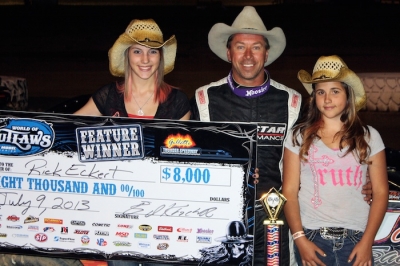 The 47-year-old star from York, Pa., broke into victory lane for the first time this season on the national circuit, passing defending series champion Darrell Lanigan of Union, Ky., for the top spot on lap 18 and then holding on to capture the Wild West Tour’s Cowboy 40. | Video

After registering four runner-up finishes in 2013 without grabbing a checkered flag, Eckert was excited to at long last bag his milestone 30th career win on the WoO LMS. His last victory came on Oct. 10, 2012, in Charlotte, N.C.

“We’ve been so close so many times this year and haven’t got it done,” said Eckert, who ranks third on the all-time series win list. “You come to win every race, and when you don’t get it done for like 27 races, it’s not very good on your morale or your team. They’ve worked very hard to try and get us a win, they’ve done their job — and I just haven’t got my job done.

“Finally tonight we had all the pieces together and got the job done. Hopefully there will be some more to come.”

Lanigan, 43, started from the pole position and led laps 1-17, but he had to settle for second place after being unable to regain command from Eckert. The circuit’s winningest driver this season fell short in his bid for two straight victories on the Wild West Tour, crossing the finish line 0.884 of a second behind Eckert.

Clint Smith of Senoia, Ga., marched forward from the ninth starting spot to finish a strong third, nearly five seconds behind Eckert. Seventh-starter Jimmy Mars of Menomonie, Wis., placed fourth after climbing as high as third early in the distance and series rookie Eric Wells of Hazard, Ky., who started 11th, slipped into fifth place in the final laps and finished there for his second consecutive top-five outing.

Eckert started third in his self-owned Team Zero by Bloomquist car — a welcomed position for the green flag after he picked the worst starting spot possible in the feature redraw at the first two events on the Wild West Tour. He immediately snatched second place when the race began and chased Lanigan’s Rocket machine until surging by for the lead off the inside of turn four on lap 18.

“He got to rolling that middle (lane) in (turns) one and two and I just got to him,” Eckert said of his pursuit of Lanigan. “It got a slippery spot out and in (the corners), and there was one spot of brown through the middle – and that was the key thing. I just started aiming for those brown spots, and as it got more technical it got more into my favor.

“I think (Lanigan) was a little too tight to hit the brown spots. He ran a good wide, hustle line, but he couldn’t cross back to the brown spots like I could.”

Eckert’s pace was slowed by just one caution flag once he gained command, on lap 25 when David Karst of Casper, Wyo., spun into an inside marker tire in turn two just a short distance in front of Eckert. He handled the restart and smoothly negotiated lapped traffic down the stretch to become the 10th WoO feature winner this season.

Lanigan, who won the 2009 WoO event at the one-third-mile Gillette oval, felt he let a golden opportunity to score his eighth win of the season slip through his fingers.

“I just gave him the bottom (groove),” said Lanigan. “It’s my own fault. When we were lapping cars (early) we were running a groove in the middle and coming off the bottom and I thought we were pretty good, but it was definitely better around the very bottom.”

Smith, 48, briefly challenged Lanigan for second on the lap-25 restart before settling into the third position for the remainder of the distance. It was just the second top-five finish of the season for Cat Daddy, who reached third place on a lap-16 restart following a caution flag for a blown right-rear tire on the car driven by Chub Frank of Bear Lake, Pa.

“My car was good,” Smith said of his Rocket Chassis. “We’ve been working hard and again Lanigan helped me with some setup tips. We’re making up ground – and if I can get my motor program straightened out a little bit better, I think we got something to compete. I had my RaceTek 412 (engine) back in tonight and it’s good on these short tracks, but we need a little more for the big tracks.”

Tim McCreadie of Watertown, N.Y., started and finished sixth, but he had to rally after slipping out of the top 10 on the opening lap when he took evasive action between turns one and two to avoid the sideways Shane Clanton of Zebulon, Ga. Clanton, who started fourth, maintained control of his car and spent much of the distance running in fifth before settling for a seventh-place finish.

Finishing in positions 8-10 was rookie Morgan Bagley of Longview, Texas, who survived a slide over the backstretch berm on lap four; fifth-starter Josh Richards of Shinnston, W.Va., whose points lead shrank to 30 points over Clanton and 32 over Lanigan; and Brady Smith of Solon Springs, Wis.

The Wild West Tour will be idle on Wednesday for teams to travel to the swing-ending doubleheader on Thursday at Red River Co-op Speedway in Winnipeg, Manitoba, and Friday at River Cities Speedway in Grand Forks, N.D.