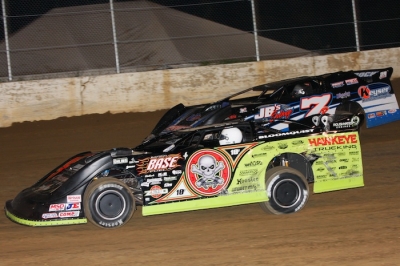 UNION, Ky. (July 9) — It had been 10 years since Scott Bloomquist ran a UMP DIRTcar Summernationals feature event, but Tuesday’s result was exactly the same as his last main event start on the tour.

Starting on the pole at Florence Speedway, the Hall of Fame driver from Mooresburg, Tenn., cruised to a 40-lap victory at the half-mile oval, resuming the success on the tour where he’s won three titles, including two championships more than 20 years ago. | Complete Summernationals coverage

Bloomquist, running an independent schedule since dropping off the Lucas Oil Late Model Dirt Series two weeks ago, was never challenged in earning $5,000 at Florence in what no doubt was a tuneup for next month’s $50,000-to-win Sunoco Race Fuels North-South 100.

“The track has some character tonight. There were some patches that were a little bit rough. It got slick in the middle, but the car was just really good all night," Bloomquist said in victory lane. “I couldn’t tell how close anybody was. I saw my guys signalling me there late in the race and it looked like we had a pretty big lead. The car just felt really good.

"Once they watered that top (of the racetrack), it was a little bit treacherous getting up there early and I was afraid to push my luck. Then once I saw some of the lapped cars were up there, I started moving up and the car was just, again, good all over the racetrack.”

Fifth-starting Shannon Babb of Moweaqua, Ill., continued a streak of steady performances with a seond-place finish, but he couldn’t stay in touch with the leader with the exception of a brief stretch following an early caution. NASCAR Nationwide Series driver Austin Dillon of Welcome, N.C., battled with Babb mid-race before settling for third while Ryan Unzicker of El Paso, Ill., and Justin Rattliff of Campbellsville, Ky., rounded out the top five.

Outside front-row starter Kent Robinson ran among the top five the first 11 laps before losing power and rolling to the infield. Series points leader Brandon Sheppard of New Berlin, Ill., was seventh in missing the top five for the third time in four races, allowing Babb to unofficially close within 50 points in the title chase. Babb moved past 10th-finishing Bobby Pierce into the second spot; Pierce and Unzicker are unofficially tied 61 points behind. The maximum points total for a single event is 80.

Bloomquist competed in a non-points Summernationals event in 2008, but his previous starts before that came in 2003 when he won four series races in four starts, including the series points finale at the Steele County Fairgrounds in Owatonna, Minn., to cap a three-race winning streak. Bloomquist is unbeaten in his last five feature starts on the series stretching back to the 2003 opener.

Three cautions slowed the race. The first yellow flag appeared on the fifth lap when Mike Jewell slowed with a flat left-rear tire; Jason Smith spun trying to enter the infield pits on lap 20. The final caution appeared on the 35th lap when Todd Frank slid into the turn-one wall.

Jason Smith won from outside the front row, transferring to the main event along with fourth-starting Jason McBride. Delmas Conley held the second spot most of the way, but when Smith checked up exiting turn two on a lap-nine restart, Conley slowed, allowing McBride and Jesse Lay to pound. Conley gamely fought back, but McBride held on for the second transfer spot ahead of Lay and Conley. Michael Asberry was fifth. The first lap was marred by a turn-four scramble when polesitter Tim Tungate spun in turn four. Jason Papich's car slid under Tungate's machine and Todd Frank was collected in the mess. A tow truck lifted Tungate's car off Papich's No. 91 and he retired. Among others involved: Joe Ramey and Brian Gray with Craig Vosbergen sliding high to avoid the mess. Another caution flew on the ninth lap when Papich, his car mangled, slowed with a flat tire, collecting Chad Smith on the frontstretch.

Scott Bloomquist got the pole in the redraw among heat winners. Kent Robinson starts alongside with Austin Dillon and Ben Adkins just behind. ... Bloomquist last made a series appearance in a non-points race nearly five years ago. Otherwise he's won his last four feature starts in points races on the series, winning the opener, the finale and two other late-season races in 2003. ... Rod Conley broke his car's rear end in his heat race, ending his night. ... Illinois-based drivers hold the top 11 spots in series points, but none of them topped their qualifying groups or won heat races. ... Jason Montgomery switched to Integra from Ohlins shocks and was making his first start with his new brand. He tried to text Integra rep Brian Daugherty for assistance after hot laps. "Either he'll get back with me today, or he'll get with me tomorrow — when it's too late," Montgomery joked. "He gave 'em to me and said don't touch 'em." ... Michael Asberry was the final entrant; the lower part of his hood was peeling back during his heat race, and once he stopped to require a push. ... Greg Johnson was the only Florence title contender to transfer through heat races. ... Austin Dillon and Jeff Babcock were the only drivers competing in both the Late Model and modified divisions; Dillon is driving Kenny Wallace's No. 62 modified. ... Jason Smith is driving the No. 25 Steve Francis drove in the series opener at Brownstown, Ind.

Competing in his first Summernationals points race since 2003, Scott Bloomquist started on the pole, got the jump and cruised to a 10-lap victory. Bobby Pierce, second in series points, finished a distant second while fifth-starting Greg Johnson got rolling on the high-side after a mid-race restart to run third. Jeff Babcock got the fourth and final transfer spot over Jason McBride. Outside front-row starter Rod Conley ran second the first four laps before losing power exiting turn four; Brian Gray got a piece of Conley's slowing car on the frontstretch but continued.

Outside front-row starter Austin Dillon pinched off polesitter Mike Jewell exiting turn two on the first lap, and the NASCAR Nationwide Series drier stayed in control the rest of the way to win the caution-free third heat. Jewell quickly had his hands full with second-row starters Ryan Unzicker and Jason Montgomery, and Unzicker worked his way around the outside of Jewell on the eighth lap. Jewell settled for third while Montgomery, who switched shock brands last week, got the fourth and final transfer spot far ahead of tail-starting Jason Papich.

Ben Adkins took command early from outside the front row and built a half-straightaway lead on polesitter Justin Rattliff after just three laps. Despite a series of cautions, Adkins ran unchallenged the rest of the way in the prelim while Rattliff held off a late charge by sixth-starting James Rice for the second spot by a half-length. Rice transferred in third spot with Steve Kester edging Jason Smith for the fourth and final transfer spot. Three cautions slowed the action. The first yellow appeared on the fifth lap when Joe Ramey spun alone in turn four, then Jesse Lay lost control on the backstretch amid a scramble on lap seven. Todd Frank retired on the lap-seven restart with heavy rear-end damage and a flat left-rear tire, and the final yellow appeared on the eighth lap when Ramey spun again between turns one and two.

Fast qualifier and polesitter Kent Robinson won the side-by-side duel with fellow front-row starter Shannon Babb on the first lap, then survived Babb's high-side onslaught over the final two laps. Robinson led Babb in the low groove most of the race, but Babb jumped to the high groove and edged ahead on the eighth lap. But Babb washed too high in the corners, allowing Robinson to stay ahead at the checkers. They built a straightaway lead on the field halfway through the race and series points leader Brandon Sheppard finished nearly that far behind in third. Dustin Griffin was the last of four drivers transferring. Track points leader Tim Prince retired from the caution-free event after running near the rear most of the way.

Robinson, who tripped the clock at the half-mile oval in 16.747 seconds, earned the pole position for the first of four heat races. Other heat race polesitters: Justin Rattliff of Campbellsville, Ky.; Mike Jewell of Scottsburg, Ind.; and three-time series champion Scott Bloomquist of Mooresburg, Tenn., making his first start in a series points race in 10 years.

The night’s action continues with four heat races, a consolation race and 40-lap main event. Modifieds, with 36 cars entered, are the only other division in action.

The series is making its third visit to Florence. Matt Miller won in 2003 and Shannon Babb won last year’s race. ... Brandon Sheppard of New Berlin, Ill., is still leading the points chase. Sheppard, a four-time winner on the tour, enters the $5,000-to-win event at the half-mile oval with a 55-point lead over 16-year-old Bobby Pierce of Oakwood, Ill. Shannon Babb of Moweaqua, Ill., also a four-time winner including Sunday’s most recent event at Tri-State Speedway in Haubstadt, Ind., is 72 points behind in third while Ryan Unzicker of El Paso, Ill., is another point behind in fourth. ... Scott Bloomquist, who hasn’t competed in a points race since winning in four straight starts during the 2003 season. Bloomquist, who won series titles in 1990-’91 and ’02, last raced on the series July 19, 2008, in a non-points event at Clarksville (Tenn.) Speedway; he failed to make the feature lineup. ... Cody Mahoney of Madison,Ind., is driving the Jim Beeman-owned No. 75 normally driven by John Gill. ... Florence's $20 general admission is among the least expensive tickets on the tour. ... Brandon Sheppard leads the tour in heat race victories with seven while Bobby Pierce has the most top-five finishes with 14 in 17 races. ... Babb has won three of the previous five races. ... Former series runner-up Randy Korte of Highland, Ill., has dropped off the tour after competing in the first 17 events; he’s fifth in series points but never had a top-five finish. ... The top three in Florence’s track points are entered: Tim Prince (946 points), Greg Johnson (917) and Nick Latham (916).