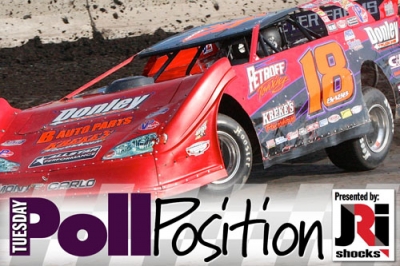 Fresh off a Gopher 50 victory at Deer Creek Speedway in Spring Valley, Minn., Darrell Lanigan of Union, Ky., remains in command of the second spot over fellow World of Outlaws drivers Shane Clanton of Zebulon, Ga., and Tim McCreadie of Watertown, N.Y, who ascended one and two spots respectively in the weekly poll. Lucas Oil Late Model Dirt Series points leader Jimmy Owens of Newport, Tenn., rounds out the top five after falling two spots from No. 3.

A trio of Summernationals pilots headline the week’s biggest risers. Following three Hell Tour wins over the course of five races, Shannon Babb (pictured) of Moweaqua, Ill., has climbed from unranked last week up to No. 15 in the latest rankings. Bobby Pierce of Oakwood, Ill., jumped six spots to No. 19, while moving into second in Summernationals points behind Brandon Sheppard of New Berlin, Ill, and claiming the series’ Fourth of July event at La Salle (Ill.) Speedway. Another handful of consistent finishes helped Sheppard not only stay atop the Hell Tour point standings, but also slide up the rankings from No. 16 to No. 14.

Aside from Babb, Tony Jackson Jr. of Lebanon, Ill., is the lone other driver new to the poll. The white-hot Jackson is making his first poll appearance of the year after scoring his sixth and seventh victories since Memorial Day in MARS DIRTcar Series action at Monett (Mo.) Speedway and 81 Speedway in Park City, Kan., during Fourth of July week action.

After restricting poll voting to staffers the previous two seasons, DirtonDirt.com invited more than 30 media members and drivers along with track, series and manufacturer representatives to vote in 2013’s rankings. Seventeen submitted ballots this week. Weekly polls continue through mid-November.

Comment: Off his game at La Salle and Deer Creek; will look to regroup at familiar tracks of Tri-City and 34. Series points: None. Last week’s ranking: 10th (+1)