Babb turns back Pierce for victory at Tri-State 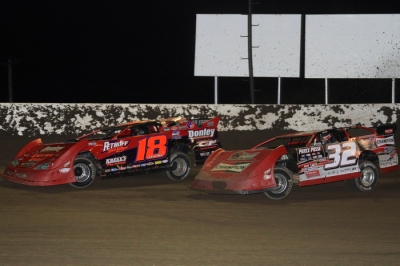 HAUBSTADT, Ind. (July 7) — Shannon Babb of Moweaqua, Ill., led all 40 laps from outside the front row Sunday at Tri-State Speedway to captured his fourth race on the UMP DIRTcar Summernationals. Babb earned $5,000 for his victory on the 17th leg of the grueling tour. | Complete Summernationals coverage

Polesitter Bobby Pierce of Oakwood, Ill., nearly pulled alongside a few times in the second half of the race, Babb drew away over the final few laps for his 80th career victory, just two fewer than all-time leader Billy Moyer.

Pierce settled for second with Tanner English of Benton, Ky., a half-track behind in third. Series points leader Brandon Sheppard of New Berlin, Ill., notched his first top-five finish in three races in finishing fourth while eight-starting Ryan Unzicker of El Paso, Ill., rounded out the top five. Sheppard and Babb are tied at four as the winningest series drivers.

“The track was excellent. I just think I got the right draw — front row outside was hard to beat tonight. It worked out perfect for me,” said Babb, who ran the high groove virtually all race long. “We’re just happy we’ve won the race. It’s been getting tough. These guys — little Bobby was right there — and these guys are making me step up my program a little bit.”

Pierce, second in series points and the youngest series winner at 16, challenged Babb after a lap-22 restart, then again amid traffic in the final laps before Babb inched away late.

"I waited for those last 10 laps and really ran those harder than I'd ran the whole race,” Pierce said. “I was hoping the lap car would holding him up and we could snooker him there in the last corner, but I came up just a little short.”

With the frontrunners approaching two slower cars on the final lap, Babb made a calculated move to go low in turns three and four. He slipped under the slower car and slip up in front of Pierce heading for the checkers to assure he wouldn’t be beaten by a last-ditch charge.

“I was just trying to tell myself not to mess up. I did mess up there one time and I don’t think he was in the right position to get me,” Babb said. “I just tried to start diamonding the corners and make longer straightaways out of it, and keep him right there behind me. I knew he was going to try to make a run for it. Sure enough, he was there.”

Babb jumped out to a half-straightaway lead at the outset while Pierce and English, who posted his best series finish, gave chase. The leading Babb avoided a lap-six scare when the slower Jason Papich spun nearly in front of him in turn one, then resumed his lead before another yellow on lap 15.

Pierce’s bobble on the restart allowed Babb to slip away as he was cruising at the halfway point ahead of Pierce, English, Sheppard and Unzicker, all running high.

In the second half of the race, Pierce began using the middle and lower grooves in the corners as he vainly tried to pull alongside Babb, who stayed on the high side, surviving a few brushes with mud built up around the quarter-mile oval.

Babb edged away with 10 laps remaining, but lapped traffic wasn’t always kind to Pierce in his final pursuit.

Three cautions slowed the action, the most serious on lap 22 when Michael Chilton and Michael Kloos collided on the high side in turns three and four; both cars suffered significant damage. Other yellows appeared on lap six for Papich’s turn-one spin and on lap 15 when Dillan White stopped atop turn two.

The series takes Monday off before returning to action Tuesday at Florence Speedway in Union, Ky., where Babb won last year’s feature.

Chris Shelton, Mike Schulte, Jason Papich and Clayton Miller get provisionals for the main event. Kevin Cole was in line for a provisional but he'd scratched for the night after a heat race accident. The intermission started at 9:30 p.m. with the Late Model feature to follow.

Outside front-row starter Michael Chilton traced to victory to transfer to the main event along with third-starting Frankie Martin in second. Polesitter Jarryd Holshouser held the third spot most of the way, but McBride slipped underneath at the white flag, then Jason Papich tried to get between them at the checkers. McBride held on to the final transfer spot by a nose over Papich with Holshouser fifth.

Bobby Pierce will start on the pole after the redraw among heat winners. Shannon Babb starts alongside with Jason Riggs starting third. ... The No. 81jr of Riggs showed smoke in the final laps of his heat race victory. He says it was because of a minor oil breather problem that's fixed and shouldn't cause any problems in the feature. ... Fast qualifier Kent Robinson, who dropped out leading his heat race, believes he broke a rod in his engine; he's done for the night. ... Rodney Melvin, who banged the wall in his heat race and finished deep in the field, has loaded up. ... Brandon Sheppard had problems with his primary car in hot laps and went to his backup. He struggled in time trials and early in his heat race, but finally got rolling for a ninth-to-second run in the prelim. He'll start sixth in the feature.

Bobby Pierce cruised to an easy victory in the final heat, taking the checkers more than a straightaway ahead of ninth-starting Brandon Sheppard. Sheppard had his problems early in the race, but he nosed under Dustin Grriffin to grab second on the seventh lap. Griffin slipped back to the fifth and final transfer spot the rest of the way while Michael Kloos and Dennis Erb Jr. got third and fourth. A lap-two caution appeared when Kevin Cole got the worst of a tangle on the backstretch with Mike Schulte and Clayton Miller. The initial start was called back when Kloos got sideways in turn one, collecting Erb Jr., Sheppard, Frankie Martin and Clayton Miller. Erb's car climbed up the nosepiece of the Kloos machine, but everyone was able to restart.

Shannon Babb's first-lap crossover move on polesitter Ryan Unzicker gave him a lead he'd never give up in the second prelim. Unzicker had his hands full with a low-running Randy Korte the rest of the way, and Korte slipped past exiting turn four on the final lap. Unzicker was third while Dillan White and Austin Dillon were the other transferrees. Three cautions appeared, the first two for Jeremy Hines. He stopped in turn four to draw a lap-three caution, then a little bumper tag on the restart left him briefly without power again in turn four. A third caution appeared on the sixth lap when it appeared Dillon lost control on the backstretch, but officials rulied it was for debris and returned him to his fourth fifth spot.

Jason Riggs slipped by Tanner English on the eighth lap for a surprising victory in the opening prelim. It appeared most of the race that Riggs would finish third as polesitter Kent Robinson built a straightaway lead over Tanner English through the first half of the race, but when Robinson lost power and dropped to the infield in turn four on the seventh lap, the race was wide open. Riggs went to work on English and slipped past at the white flag and edged away for the victory. English was second to transfer along with McKay Wenger, Jeff Watson and Todd Frank. Rodney Melvin got into the wall early, wadding up the rear-right side of his car, and Steve Karnes spun inside turns three and four midway through the race.

Battling a treacherous turn-four cushion during qualifying, Robinson tripped the clock at 14.121 seconds at the high-banked quarter-mile oval to earn a pole starting spot in one of three heat races. Other heat-race polesitters: Ryan Unzicker of El Paso, Ill., and Bobby Pierce of Oakwood, Ill. Robinson was also quickest in the modified division.

Series points leader Brandon Sheppard of New Berlin, Ill., struggled in time trials and will start ninth in his 10-car heat race. The night’s action includes three heat races, a consolation race and 40-lap main event on a pleasant, warm evening with mostly clear skies at the quarter-mile oval. The top five finishers from each heat race transfer with three drivers transferring from the consy. Four provisional starters will round out the 22-car field.

Tri-State last year hosted one of the tour’s most exciting events with Scott Weber and Scott James battling for the lead on the last lap, but neither are among this year’s 27 entrants. ... Sheppard leads Pierce by 65 points in the series chase. Unzicker is 68 points behind and three-time series champion Shannon Babb of Moweaqua, Ill., is 91 points out of the lead. ... The fifth-place driver in series points, Tyler Reddick of Corning, Calif., isn’t entered at Tri-State. He’s missing his first series race and recorded a best series finish of second two weeks ago at I-96 Speedway in Lake Odessa, Mich. ... Saturday's action at Highland (Ill.) Speedway rained out during time trials; a makeup date hasn't been announced but it's expected to be a non-points event later in the season. ... Tri-State's program includes modifieds with nearly 50 cars entered. ... Besides Reddick dropping off the tour, Tim Lance of Brimfield, Illl., is among series regulars not entered at Tri-State. Lance, who has also fielded a car at select weekend events for last year's series champion Brian Shirley, has entered all but two series events. ... Tanner English of Benton, Ky. hadn’t planned on racing at Haubstadt, but because of Saturday’s rainout at Highland, he decided to compete tonight. ... Jason Papich of Nipomo, Calif., who ran part of the tour last season with car owner Tony Toste, is in action at Haubstadt and plans to run the next six series events. He entered last week’s event at La Salle, Ill., after the Lucas Oil Late Model Dirt Series event at Portsmouth (Ohio) Raceway Park. ... Dillan White of Crofton, Ky., is making his first and only Summernationals appearance; the family’s masonry business has kept him busy this summer, limiting him to fewer than 20 starts. ... Another Kentuckian, Michael Chilton of Salvisa, Ky., is making his Tri-State debut and first series appearance of 2013. ... NASCAR Nationwide Series driver Austin Dillon of Welcome, N.C., who entered last year’s Haubstadt race, is almost making his first series appearance of the season. ... Kent Robinson and Clayton Miller are among drivers entered in Late Model and modified divisions. ... Many of the teams and race officials plan on going to Holiday World on Monday's off-day, the amusement park in nearby Santa Claus, Ind.