Segraves breaks through for his first NCRA victory 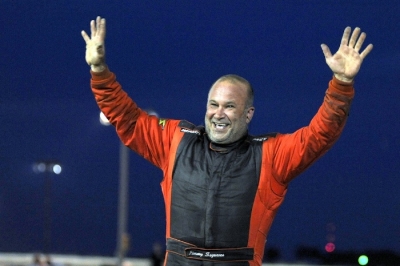 BELLEVILLE, Kan. (July 5) — Jimmy Segraves of Wichita, Kan., led all but the first lap Friday at the Belleville High Banks for his first career victory on the National Championship Racing Association.

Segraves, NCRA’s 2007 Rookie of the Year, took the checkers ahead of Chase Junghans of Manhattan, Kan., who led the first lap of the 20-lap main event. Mike Wiarda of Aurora, Neb., was third followed by Gary Gorby of Caney, Kan., and 13th-starting Delbert Smith of Wichita in the 14-car field. | Slideshow

Junghans led a single lap before Seagraves took over the top spot on lap two. One lap later, the red flag appeared when series rookie Jeremy Petty’s car flew over the turn-four wall. The car landed upright; he was uninjured but done for the night.

On the restart, Seagraves maintained his lead and kept Junghans behind him the rest of the way and went on to score his first Belleville victory.

Notes: Segraves drives a No. 3 sponsored by Alternative Pest Management and Superior Control Concepts. ... His previous victory came May 17 at Salina (Kan.) Speedway in weekly action. ... Next up for NCRA competitors is July 12-13 action at the Kansas State Fairgrounds in Hutchinson, Kan., and Mid-Nebraska Speedway in Doniphan.