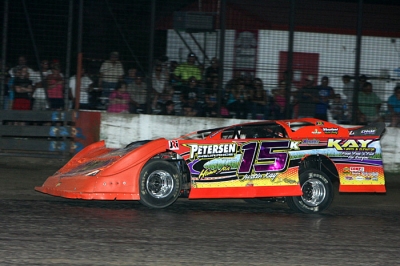 Justin Kay of Wheatland, Iowa, topped another 50-lap feature that ran green to checkered at Davenport Speedway. The 24-year-old Kay had raced to his tour career first win in Tuesday’s caution-free event Independence, then backed that performance up with another $3,000 victory at his home track. | Slideshow

Eckrich started on the pole and led the first two circuits before Kay, who had started third, zoomed by on the quarter-mile. The battle was clearly for second as Kay pulled away in lapped traffic.

Eckrich, the 12th-starting Kammerer and seventh-starting Harris swapped second before Eckrich settled in just before midway. Harris finally caught up and swiped the spot back on the last lap.

Only one driver — Denny Eckrich — has won on the tour this season without scoring a second straight victor. Former series champ Ray Guss Jr. of Milan, Ill., won back-to-back series features before Harris started his streak.