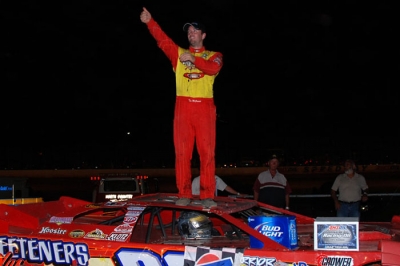 Tim McCreadie celebrates atop his winning No. 39. (shooterguyphotos.com)

Not only did the 39-year-old star from Watertown, N.Y., score his fourth WoO triumph of 2013, it came on his son Gavin’s third birthday. The toddler was home in the Empire State with his mother, Karen, but McCreadie made sure he dedicated his 24th career win on the national circuit to the curly-haired boy. | Video | Slideshow

“This one’s for you, Gavin,” McCreadie said after the checkered flag. “It’s cool to win on his birthday. I wish they could be here with me, but when I get home we’ll have (Gavin’s birthday) party next weekend.”

McCreadie, who started from the pole position but was outgunned for the lead at the initial green flag by his front-row mate Tim Fuller, kept up the pressure on his fellow New Yorker until gaining command on lap 15. T-Mac never looked back en route to a memorable victory that brought him $10,650 to buy presents for his kid.

York, Pa.’s Eckert, who started sixth, passed Darrell Lanigan of Union, Ky., for second on lap 43 and drew close to McCreadie during the final circuits but settled for second place, 0.669 of a second behind the victor. It was the fourth runner-up finish of the season for Eckert, who is still searching for his first WoO win of 2013.

Lanigan finished third, Chub Frank of Bear Lake, Pa., placed fourth and home-state favorite Brady Smith of Solon Springs, Wis., who lives 35 miles from Amsoil Speedway and raced regularly at the 3/8-mile track early in his career, completed the top five. Finishers three through five ended the race in the same positions they started it, but each driver settled into their ultimate spots only late in the distance.

The race’s late stages were the most stressful for McCreadie, who scrapped to keep Lanigan, and then Eckert, at bay. McCreadie held firm control of the top spot for nearly 20 laps after sailing around the outside of Fuller off turn two to assume command on lap 15, but his edge shrunk as the finish neared.

After Eckert, 47, slipped underneath Lanigan to grab second, the 2011 WoO champion appeared primed to make the final laps interesting. He pulled his Team Zero by Bloomquist car within a couple car lengths of McCreadie’s Sweeteners Plus Warrior but couldn’t summon quite enough speed to break into Victory Lane.

“You just gotta put a whole night together and we haven’t really done that yet,” Eckert matter-of-factly stated following the race when asked about falling just short of victory once again. “We’ve been close, but you gotta draw good too. You put five of these guys in front of you (for the start) like we did tonight and you’re in trouble.

“We got close there at the end, but we ran out of time. Maybe tomorrow night.”

McCreadie held on despite struggling with a car that was steadily becoming harder to drive.

“The more we ran the worse we got with fuel burnoff and stuff,” said McCreadie, who was victorious in the home state of his engine builder, Pro Power’s Bill Schlieper of Sullivan, Wis. “But I think a lot of it was just our tire was just dying, our right-rear was starting to give. I knew the tires (Eckert) had were gonna be better if we went a long green (flag) run. We were just a touch softer (on tire compound choice) than he was.

“I didn’t know (Eckert) was there,” he continued with his description of the final circuits. “I just tried to park (on the bottom groove) and not make a mistake. On the last lap the last thing I wanted to do was go up (off the bottom), slip across the middle and get in a push and have him drive under me (off turn four). These guys, (crew members) Craig (McCrimmon) and Johnny Coco, they worked way too hard for me to make a mistake.

“They said he was close on the middle and the top, but it was just our night. We drew a good number and everything lined up for us tonight.”

Experiencing the other end of the racing-fortune spectrum was WoO points leader Josh Richards, who could only manage a 15th-place finish after a nightmarish turn of events just before and after the start of the race.

First, Richards, who was scheduled to start 12th, was forced to take the green flag from the rear of the field because his team violated WoO rules by changing a tire on their car after presenting it in the staging area. He then was swept up in an eight-car homestretch crash that brought out the red flag at the initial start — an incident that included local Late Model racers Todd Gehl, Roger Paolo, Aaron Lillo, Travis Budisalovich, Terry Lillo, Trevor Wilson and Zachary Wohlers and left Richards’s Rocket Chassis house car with extensive front-end damage.

Richards’s machine was towed to the pit area with its nosepiece completely ripped off. His crew was able to patch up the car enough for Richards to return to the race on lap 15, allowing him to turn a potentially devastating last-place finish into a 15th-place run that only cut his points lead over Shane Clanton of Zebulon, Ga., who finished seventh, from 44 to 28 points.

Finishing in positions 6-10 was Fuller, who faded after leading laps 1-14; Clanton, who nearly overtook his Kennedy Motorsports teammate Fuller on the final circuit; Bub McCool of Vicksburg, Miss., who fell from sixth to eighth on the last lap because a broken oil-pump belt caused him to slow; Jeff Provinzino of Hibbing, Minn., who earned a $500 bonus as the highest-finishing non-regular driver who hasn’t won a WoO A-Main; and WoO rookie Eric Wells of Hazard, Ky.

After the red flag on the opening lap, the A-Main was slowed by only a single caution period. That came on lap 19 when Wohlers slowed between turns three and four.