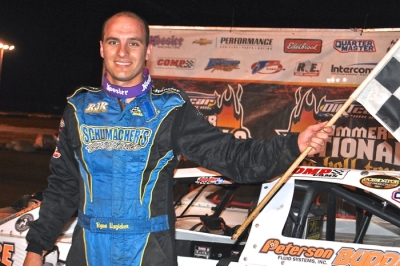 The second-starting Unzicker got the jump on polesitter Bobby Pierce and mastered the high line around the quarter-mile oval in pulling away through the majority of the 40-lap race.

A caution with nine laps remaining gave Babb of Moweaqua, Ill., a chance to make a late run at the leader, but Unzicker stayed strong around the top of the track and drove to a $7,500 victory. | Complete Summernationals coverage

“Everybody knows we like the bottom, but we set up for the top tonight,” said Unzicker, who claimed the sixth Summernationals victory of his career. “It seemed like the top was the favorable spot all night long. We just kept the car where it needed to be and hit the right marks. We definitely hit the setup; that thing was rolling tonight.”

Babb settled for the runner-up finish ahead of Tyler Reddick of Corning, Calif., while Brian Shirely of Chatham, Ill., and Pierce of Oakwood, Ill., rounded out the race’s top five finishers. Series points leader Brandon Sheppard of New Berlin, Ill., was seventh after using a provisional to start from the 19th position.

The race was slowed three times. A backstretch scramble on the opening lap sent Mark Voigt on his roof and left Terry English’s car heavily damaged. Neither driver was injured, but a red-flag was needed to clean up the mess. Mark Burgtorf spun on lap seven to cause the second caution, and Michael Kloos’s spin on lap 31 brought out the final yellow.

Friday’s race was the 16th leg of the month-long tour. Action moves to Highland (Ill.) Speedway Saturday for a $10,000-to-win event.

Looking for his second victory in as many nights, Bobby Pierce will lead the 22-car starting field to green for tonight's 40-lap main event. Pierce, who won Thursday's race at La Salle (Ill.) Speedway, drew the pole in a redraw among heat race winners. He'll be joined on the front row by Ryan Unzicker, while Shannon Babb and Tyler Reddick will share row two. ... Series points leader Brandon Sheppard will use a Summernationals points provisional to start 19th in the main event with Chad Zobrist using the UMP points provisional to start 20th. Jason McBride will use the track provisional to start 21st with Tim Lance using the second series provisional to start 22nd. ... The oil pump was to blame for Brandon Sheppard's demise on the final lap of heat four. His crew is working to prepare his backup car as Sheppard looks to rebound and maintain as much of his 72-point lead in the series standings as possible. ... Shannon Babb has won the feature every time he has won a heat race on this year's tour.

Rodney Melvin cruised in the 12-lap B-main, winning the caution-free race by more than a straightaway to earn the 17th starting spot in tonight's main event. Michael Kloos was second to also earn a feature starting spot.

Billy Faust used the high side to charge from a mid-pack starting start and claim the 10-lap C-main. Shelby Miles, Daniel Jacober and Jason Zobrist joined Faust in earning B-main starting spots. Mike Schulte led the first half of the race and was second until spinning with one lap remaining. Steve Lach went for a wild ride when his car rolled multiple times in turns three and four. He wasn't injured.

Shannon Babb grabbed the lead when race-long leader Brandon Sheppard slowed on the final lap of the fourth and final heat race and led through a dash to the finish to score the victory. Sheppard was well ahead exiting turn two on the final lap but slowed and pulled to the infield. A tangle back in the pack caused a caution at the same time, and Babb held off McKay Wenger on the restart. Kevin Cole was behind Wenger in third with Austin Rettig claiming the fourth and final transfer spot. Prior to his late-race demise, Sheppard was saved on the race's first start when he jumped the cushion in turn two and tagged the wall. A chain-reaction tangle back in the pack left Shelby Miles parked on the track to cause a compete restart.

Bobby Pierce got the jump on the start of the third heat and held off pressure from polesitter Kevin Weaver in the opening laps before pulling away to a comfortable lead at the finish. Weaver settled for second, nearly a straightaway back, with Randy Korte farther back in third. Terry English grabbed the fourth and final transfer spot. The race was slowed with one lap complete when a tangle between Jason Riggs and Mark Taylor collected Clay Baumann and Adam Tischhauser. Baumann got the worst of it with his car climbing the back straightaway wall.

Second-starting Ryan Unaicker used high-side momentum to power around polesitter Dustin Griffin through the first corner in heat two and pulled away in leading every lap of the caution-free 10-lapper. Griffin kept up with Unzicker in the first two laps, but two close calls with the turn-two wall dropped him back to more than a straightaway behind at the finish. He managed to hold off Mark Burgtorf and Mark Voigt for second. Burgtorf and Voigt also earned feature starting spots.

Polesitter Tyler Reddick survived a mid-race bobble to hold off Kent Robinson for a flag-to-flag victory in the first of four 10-lap heat races. Robinson pressured Reddick through the early laps and again when Reddick jumped the cushion exiting turn two on lap five. But he couldn't keep pace with the leader and settled for second, just ahead of Brian Shirley. Third-starting Tanner English pressured Robinson for second early in the race but slid back to fourth at the finish. He'll join the top three in transferring to the main event. Two false starts were waved off before the race finally went green and ran caution-free.

Still looking for his first victory on the month-long tour, Reddick will start from the pole of one of four heat races coming up at the quarter-mile oval. Other heat race polesitters after group qualifying: Dustin Griffin of Camp Point, Ill.; Kevin Weaver of Gibson City, Ill.; and Shannon Babb of Moweaqua, Ill.

With his victory in Thursday’s race at La Salle (Ill.) Speedway, Bobby Pierce of Oakwood, Ill., has closed to within 72 points of Brandon Sheppard of New Berlin, Ill., at the top of the series championship chase. Ryan Unzicker (-95) of El Paso, Ill., and Shannon Babb (-109) of Moweaqua, Ill., are both also still in the hunt.Fayette County is hosting its seventh Summernationals event. ... The tour first visited the track in 2002, then again in ’03. The tour was back in’06 before visiting each year since 2010. ... Brian Shirley of Chatham, Ill., won last year’s Summernationals race at the track on his way to the championship. Only entering select series events this year in Tim Lance’s backup car, Shirley will compete tonight. ... Lance and Shirley both skipped Thursday’s race at La Salle, giving Lance just two non-appearances on this year’s tour. ... Randy Korte (’03) and Shannon Babb (’02) are the only other past winners entered in tonight’s event. ... Rodney Melvin of Benton, Ill., is making his first series appearance since finishing 19th in the tour opener at Brownstown (Ind.) Speedway. Melvin, a seven-time race winner on the series, last won a Summernationals event in last year’s visit to Highland (Ill.) Speedway, where action moves to on Saturday. ... Kent Robinson of Bloomington, Ind., is back with tour for the third time this year. Along with tonight’s race, Robinson plans to race Sunday at Tri-State Speedway and next week at Florence Speedway and Terre Haute Action Track.