From contributor and track reports 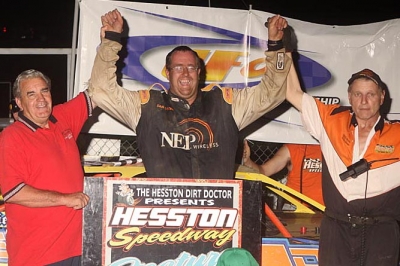 HESSTON, Pa. (July 4) — Dan Stone of Thompson, Pa., frequently running up front in recent weeks, broke through for a victory on the Fourth of July at Hesston Speedway. Stone, who took the lead on the 14th of 55 laps, earned $4,044 for his second career victory on the Three State Flyers circuit. | Slideshow

Stone, who started fourth, took the checkers ahead of outside front-row starter Kenny Pettjohn of Millsboro, Del., who led the first 13 laps.

The victory was Stone’s first on the circuit since the 2010 finale at Hagerstown (Md.) Speedway.

Notes: Stone’s Rocket Chassis is sponsored by NEP Wireless and Stone’s Excavating. ... His previous 2013 victory came April 27 at Selinsgrove (Pa.) Speedway, a $2,500 payday in the track’s Spring Championship. ... Mark Pettyjohn, who finished 10th, was the race’s hard charger. ... A rain shower after the pill draw delayed the start of racing. ... The race was originally set to pay $5,200-to-win, but that was amended earlier to spread more purse money through the field. The race paid $450 to every starter and $250 for non-qualifiers. ... George Dixon Jr. won the night’s Semi-Late Model feature. ... The Three State Flyers tour heads to Bedford (Pa.) Speedway on July 5 for a $3,000-to-win event.