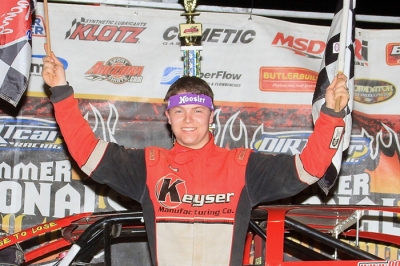 Just four days after claiming his first Summernationals victory Sunday at Lincoln (Ill.) Speedway, Pierce of Oakwood, Ill., was back in victory lane Thursday night after dominating the second half of the month-long tour’s 40-lap feature at La Salle Speedway on his way to a $5,000 victory. | Complete Summernationals coverage

Pierce used a low-side charge in advancing from his seventh starting spot to take the lead from Tyler Reddick of Corning, Calif., following a lap-14 restart and later pulled away from polesitter Kevin Weaver of Gibson City, Ill.

“It was almost the same deal as Lincoln — just catfishing it there around the bottom,” said Pierce, who won Lincoln’s event with a similarly dominating performance on Sunday. “I had to work for this one though; it was a little bit more tough. I had to start farther back.”

Ryan Unzicker of El Paso, Ill., finished second, while Weaver, who led the race’s opening three laps and briefly challenged Pierce for the lead around halfway, was third. Reddick slid back to fourth after leading laps four through 15, with fast qualifier Jason Jaggers of Wyanet, Ill., rounding out the top five in a race slowed by just one caution.

Pierce proved early in the race that he had one of the field’s fastest cars by charging from seventh to third by lap by lap six. Glued tight to the quarter-mile track’s bottom groove, Pierce ran down Unzicker and Reddick by lap just a few laps later and was by Unzicker for second by lap 12.

Pierce was alongside Reddick for the lead going into the turn three on lap 15 before the race’s only caution waved for Randy Korte’s stalled car, giving Reddick the opportunity to restart back out front. But Reddick’s reprieve didn’t last long, as Pierce dove under him through turns one and two on lap 16 and pulled ahead down the back straightaway.

After fading early in the race, polesitter Kevin Weaver of Gibson City, Ill., used a high-side run to charge back to second by lap 19 and briefly looked to be cutting into Pierce’s lead.

But Weaver’s high-side charge stalled just a few laps later, as Pierce cruised through the remaining distance and successfully negotiated lapped traffic in building more than a straightaway advantage by the finish.

Pierce, who broke through for his first-ever Summernationals victory at Lincoln (Ill.) Speedway on Sunday, won in the 15th leg of the 31-race series. Action moves to Fayette County Speedway in Brownstown, Ill., on Friday for a $7,500-to-win event.

Kevin Weaver will lead the 22-car feature field to green after drawing the pole in a redraw among heat race winners. Tyler Reddick will start second with Randy Korte and Ryan Unzicker sharing row two. ... While fans enjoyed the fireworks show before the start of the Late Model main event, drivers have been fretting over what tire compounds to run. None seemed too sure of which compound combination would work best. Heat race winner Ryan Unzicker chatted with Rusty Schlenk and inspected his tire wear from the B-main but still wasn't sure what to go with. "It definitely helped (to talk with Schlenk)," Unzicker said. "But I still have no idea what to do. We'll take a stab at it and see if we get it right." ... Polesitter Kevin Weaver is hoping to turn around a string of bad luck with a strong finish tonight, if not a victory. "We're in a better spot tonight than we have been in a while; maybe that means our luck is turning around," Weaver said. ... Series provisionals went to Dustin Griffin and Todd Frank while Terry English got the UMP points provisional. There was no track provisional.

McKay Wenger topped a three-way battle with Steve Thorsten and Todd Frank to claim the 10-lap C-main and earn a starting spot at the back of the B-main. Frank was second with Thorsten and Lyle Zanker also earning B-main starting spots.

Polesitter Tyler Reddick turned back a mid-race challenge from Mark Burgtorf and pulled away to victory in the fourth and final 10-lap heat race. Burgtorf settled for second in the caution-free race, while Jason McBride and Rich Bell also grabbed feature transfer spots.

Ryan Unzicker topped a stout third heat, turning back an early challenge from polesitter Brandon Sheppard and later topping third-starting Bobby Pierce in a photo finish. Pierce settled for second with Sheppard just behind in third. Scott Schmitt topped Brian Birkhofer for the fourth and final transfer spot. The first start was waved off when Unzicker didn't fire, but he took advantage of the complete restart to grab the lead on the opening lap.

Kevin Weaver dominated the second heat, getting the jump from his second starting spot and leading every lap over polesitter Tanner English. Jason Riggs pressured English for second early, but later had to hold off Shannon Babb for third. Babb looked under Riggs multiple times but had to settled for fourth at the finish. He'll join the top three finishers in transferring to the main event. An opening lap tangle involving Terry Knutti caused a complete restart. The race ran caution free from the rest of the way.

Randy Korte got the jump on polesitter Jason Jaggers and cruised in the first 10-lap heat race, building nearly a straightaway lead by the finish. Jaggers topped Frank Heckenast Jr. in a close race for second, while Steve Dimmick outdueled Rusty Schlenk for the fourth and final transfer spot. The first start was waved off when Jaggers fired early and Korte didn't accelerate, resulting in a scramble that left Korte's car with minor left-rear sheet-metal damage and Mike Glynn with a flat left-rear tire.

Jaggers will start from the pole in the first of four heat races coming up at the quarter-mile oval. Other heat race polesitters after group qualifying: Tanner English of Benton, Ky.; series points leader Brandon Sheppard of New Berlin, Ill.; and Tyler Reddick of Corning, Calif.

The top four finishers in each 10-lap heat race transfer directly into tonight’s 40-lap main event with the four heat winners all redrawing for their starting spots. Two more drivers will earn feature starting spots through consolation races, while four provisional starters will round out the 22-car feature starting field.

The cushion in turns three and four gave drivers fits throughout the qualifying session. Ray Guss Jr. got the worst of it when his car went airborne and rolled twice after slamming the thick cushion entering turn three on his second lap. Guss climbed from his car apparently uninjured, but his car suffered heavy damage.

Torin Mettille also went for a wild ride after getting into the cushion, with his car jumping high in the air and slamming down to flatten his left-rear tire. Kevin Weaver, Brian Birkhofer and Aaron Ricketts all also had trouble with the cushion at one point during their qualifying runs.

With his runner-up finish Wednesday at Jacksonville (Ill.) Speedway, Brandon Sheppard of New Berlin, Ill., has stretched his points lead nearly to 100 points. Bobby Pierce of Oakwood, Ill., trails Sheppard by 99 markers, while Shannon Babb (-103)of Moweaqua, Ill., has moved to third after back-to-back victories at Quincy (Ill.) Raceway and Jacksonville. Ryan Unzicker (-117) of El Paso, Ill., is fourth. ... Brian Birkhofer of Muscatine, Iowa, has rejoined the tour for the first time since Fairbury American Legion Speedway’s event on June 22. Birkhofer, winner of last year’s Summernationals race at La Salle, has finished among the top three in all four of his tour appearances this season, including a victory June 14 at Cedar Lake Speedway. Birkhofer claimed a $10,000 payday at La Salle earlier this season in ALMS action. ... Hosting its 18th Summernationals event, La Salle has been a mainstay on the tour’s schedule for much of its 27-year history. ... With three victories, Shannon Babb (’03, ’05 and ’11) is tied with John Gill for the most Summernationals wins at La Salle. Along with Babb and Birkhofer, past winners entered in tonight’s event include Randy Korte (’98 and ’09) and Kevin Weaver (’00). ... California driver Jason Papich of Nipomo, is making his first appearance on this year’s tour fresh off of making his first Lucas Oil Late Model Dirt Series feature start Wednesday night at Muskingum County Speedway in Zanesville, Ohio. Papich, who entered a handful of events on last year’s Summernationals tour, made the trip over from Ohio today after tonight’s Lucas Oil race at Portsmouth (Ohio) Raceway Park was postponed to Friday. He plans to head back to Portsmouth after tonight’s action. ... Jason McBride of Carbondale, Ill., has unloaded his backup car after breaking the rear-end in his primary car during Wednesday’s feature. The backup is the car he ran on the Lucas Oil tour for the first half of the season and hasn’t been ran yet in Summernationals action.