From special and staff reports 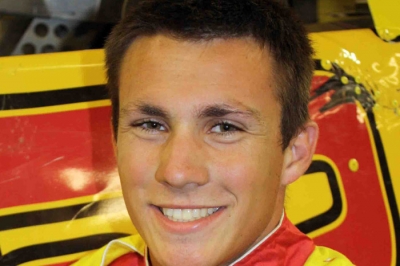 Dirt Late Model rookie Brian Kosiski, 19, of Papillion, Neb., is on a quest to get his first feature victory in a division once dominated by his dad Steve and grandfather Bob.

Kosiski competes in two different types of cars at two different tracks. He competes in the open-motor Super Late Model division at I-80 Speedway, a 4/10-mile oval in Greenwood, Neb., on Fridays and in a Crate Late Model at Junction Motor Speedway, a 3/8-mile oval in McCool Junction, Neb., on Saturdays. Depending on the builders and track rules in the region, the difference between the two engines can average between 200-300 horsepower.

“This is my first time in a Late Model and I’m still getting comfortable in it. We’ll get there,” Kosiski said after less than 10 starts. “The biggest thing is getting more experience with the power of the open motor car. I’m racing against some guys who have been doing this for 25 years. I’m improving.”

Through mid-June, Kosiski’s record in nine starts is four top-fives and five top-10s. His best finish was second twice at Junction. He’s ninth I-80 points, third in Junction points, and third in NASCAR state points.

Racing is in the blood of the Kosiskis, Nebraska’s most famous dirt racing family.

Retired driver Steve Kosiski was a seven-time champion of NASCAR’s former Busch All-Star Series for Dirt Late Models. He won a series-leading 51 races between 1985 and 2001. Bob Kosiski raced from 1950 through 1978 and won 16 track championships in coupes and then Late Models.

Eleven of the senior Kosiski’s championships came at the former Sunset Speedway in Omaha, where he and his sons won a total of 25 Late Model championships before the track closed. Bob’s father Joe began the family’s participation in dirt track racing as a car owner, originally fielding modified coupes.

Brian Kosiski’s performance in 2012 was his statement of readiness to move up to Late Models. A fourth-year B-modified driver at I-80 and Junction, he posted five wins, 17 top-fives and 22 top-10s in 27 starts. He finished third in NASCAR Finalist Division IV dirt track standings. He placed fourth in I-80 points and second at Junction.

Car owner Steve Wright offered what might be considered a “luxury” ride to Kosiski at Junction this year.

“I just show up and race it,” Kosiski said. “I’ve never done that before. It’s fun to work with new people.”

At I-80, Brian Kosiski drives and maintains a Super Late Model owned by Jay and Marilyn Burdic, for whom his dad drove. Crew members include Jerry Wancewicz and Harley Moen. The MasterSbilt Race Car is sponsored by Malvern Bank, Al Belt Custom Homes and Imperial Tile.

Just like his dad, both cars are bright yellow and carry a red No. 52.

Kosiski can tap the experience of his dad as well as cousin Andrew, a nine-year veteran of Dirt Late Model racing. Other third-generation family members who have spent time behind the wheel include brother Rob and cousins Kortney, Michaela and Tia.

Kosiski is thankful to begin his Dirt Late Model career, but said he and his cousins didn’t feel any pressure to drive race cars.

“We race because we want to race,” Kosiski said. “We don’t have to live up to our family’s success in racing, but we want to. I’d like to start winning like dad did. That’s the dream.”

The Kosiski family has multiple business interests including I-80 Speedway and Kosiski Auto Parts in Omaha. A lot of family members work there, including Brian and Andrew. Brian is in his second year of business administration studies at the University of Nebraska-Omaha. — Paul Schaefer, NASCAR

• Ricky Elliott of Seaford, Del., won the first of Twin 20s on June 29 at Delaware International Speedway, but Donald Lingo Jr. of Millsboro, Del., beat the eight-time winner in the nightcap to collect a $700 bounty.

• At Grandview (Pa.) Speedway on June 29, Sean Merkel of Gilbertsville, Pa., notched his first Late Model victory at the track since 2007.

IMCA: Through June 23 events, Nick Marolf of Moscow, Iowa, has a five-point advantage over Tyler Bruening of Decorah, Iowa. Darrel DeFrance of Des Marshalltown, Iowa, is two points back of Bruening in third.

WISSOTA: Mike Balcaen of Winnipeg, Manitoba, has taken over the points lead, with a two-point edge over Dustin Strand of Grand Forks, N.D. Chad Becker of Aberdeen, S.D., is third, five points out of the lead.

AMRA: Andy Bond of Coolville, Ohio, has reclaimed the top spot from reigning champ Chris Garnes of Evans, W.Va., with 878 points to Garnes’ 862. Ronnie Mayle of Chesterhill, Ohio, is third with 850 points.

NeSmith Chevrolet Series: One week after breaking a tie with Derrick Mackmer, Sid Scarbrough of Florence, Miss., finds himself in another tie atop the Crate Late Model sanctioning body’s weekly standings, this time with Noah Daspit of Kiln, Miss. Mackmer of Purvis, Miss., is third, eight points behind the two leaders.

Among non-touring and independent special events at dirt tracks around the country for the upcoming weekend (and beyond):

Moulton (Ala.) Speedway (July 6): The All-American 30 pays $1,500-to win for Limited Late Models, and fans being a non-perishable food idea receive free admission. Super Late Models are also on the card.