Jackson rolls on with victory at Monett 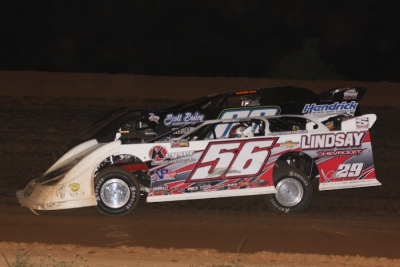 Tony Jackson Jr. (56) gets rolling early in his victory at Monett. (Ron Mitchell)

MONETT, Mo. (July 3) — Red-hot Tony Jackson Jr. of Lebanon, Mo., led all but one lap Wednesday at Monett Speedway for his sixth Super Late Model victory between Memorial Day and the Fourth of July.

Never seriously challenged after taking the lead from Jesse Stovall of Galena, Mo., on the second lap, Jackson earned $3,000 in a race co-sanctioned by the MARS DIRTcar Series and National Championship Racing Association. | Slideshow

Stovall settled for second in the 40-lap feature while six-time MARS champion Terry Phillips of Springfield, Mo., was third. Justin Wells of Aurora, Mo., and 21st-starting Will Vaught of Crane, Mo., rallied to round out the top five.

Jackson, who extended his MARS points lead, started on the front row with Stovall and was inches behind on the first lap. But he went around Stovall in turns one and two to take a lead he’d never give up, eventually taking the checkers by a full straightaway margin.

Cautions flew on lap nine when Jackson made contact while lapping Chris Morelock, who slide to a stop in turn three, and on lap 26 when Jeremy Petty spun in turns three and four.

Jackson’s victory was his third of the MARS season and fifth of his career. He notched his first career NCRA victory and has won with five different Late Model organizations over the past six weeks.

Notes: Jackson's Rocket Chassis has a Cornett engine and sponsorship from RLB Financial, Lindsay Chevrolet and Club 29. ... Will Vaught rallied to fifth after taking a provisional starting spot. An incident in his heat race forced him to run the consolation, a race he didn’t complete. ... Among drivers failing to make the feature lineup: Steve Johnson, Randy Roth, Jeff Roth, Jon Driskell and Jimmy Segraves. ... MARS and NCRA competitors are in action again Thursday with a $2,500-to-win event at 81 Speedway in Park City, Kan.