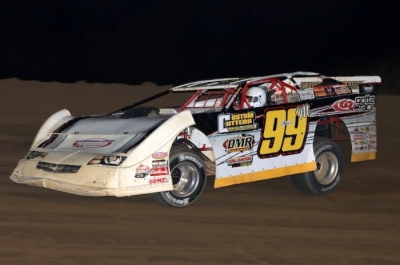 Devin Moran heads to victory at his hometown track. (rdwphotos.smugmug.com)

Moran, the 18-year-old son of Hall of Fame driver Donnie Moran, crossed the finish line to the cheers of the home-track crowd just as his father rolled his own race car in turn two. The elder Moran escaped the accident uninjured and joined his son in victory lane. | Video | Slideshow

"I can't believe it,” said Moran, who became the tour’s first first-time winner on the season. “I can't thank my dad and grandpa enough for all of their support. This is a dream come true to win one of these Lucas Oil races. These guys are the best of the best, and to win here on my home track is super special.

Moran survived a close call when he nearly lost control of race car after hitting a rough spot on the track surface. He beat four-time series champion Earl Pearson Jr. of Jacksonville, Fla., to the finish while Doug Drown of Wooster, Ohio recorded the third-place finish.

"The car was really good in one and two, but at one point, I thought I had given it away,” said Moran. “I hit a rut and it almost took me over the bank in turn four. There were a lot of cautions and it was nerve-wracking, but the car handled so well all night.”

Drown started second and ran up front early before drawing a lap-9 caution. He rallied back from the tail of the field over the final 41 laps to net the podium finish.

Notes: Moran’s MasterSbilt Race Car is powered by a Malcuit Race Engine with sponsorship from Custom Cutters, Bazell Race Fuels, Eddie's Sunoco and Cameron Oil and Gas. ... The event was delayed nearly two hours by rain. ... Lucas Oil Series competitors complete the holiday doubleheader Friday at Portsmouth (Ohio) Raceway Park; the race was originally scheduled for the Fourth of July but postponed a day by rain.