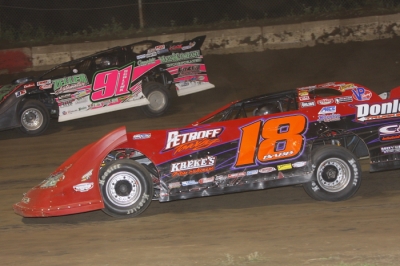 JACKSONVILLE, Ill. (July 3) — After performing below his usual standards for most of the first half of the UMP DIRTcar Summernationals tour, Shannon Babb is hoping he’s getting hot at the right time.

With the month-long tour officially reaching its halfway point Wednesday night at Jacksonville Speedway, Babb, the three-time series champion of Moweaqua, Ill., bagged his second victory in as many night’s, earning $5,000 at the tight quarter-mile oval for his third victory on this year’s tour. | Complete Summernationals coverage

Babb took the lead in Wednesday’s 40-lap main event when race-long leader Rusty Schlenk of Weston, Ohio, slowed with nine laps remaining and led the remaining distance in claiming the 79th Summernationals victory of his career.

“I finally feel like I got my act together. We’ve got a program that’s really working,” said Babb, who also won Tuesday night’s Summernationals event at Quincy (Ill.) Raceway. “The car’s really good. I’m really happy with it.”

The fourth-starting Babb pressured Schlenk for much of the race and inherited the lead when Schlenk suffered a flat right-front tire to bring out the race’s only caution just after the leaders completed lap 31.

Ryan Unzicker of El Paso, Ill., and series points leader Brandon Sheppard of New Berlin, Ill., each took turns chasing Babb in the race’s closing laps, but neither could keep pace as Babb pulled away to the victory.

While the performance helps Babb build momentum as he chases Sheppard entering the second-half of the tour, he knew it was Schlenk’s misfortune that paved the way for victory.

“I think he was gonna stay right where he was at,” Babb said of Schlenk’s rough but fast high line around the racetrack. “He was running a real good race against the traction, and I was probably looking at second. I hate it for him, but things happen.”

The race served as the 14th leg of the 31-race Summernationals schedule, which has been shortened to a planned 28 points races due to a pair of rainouts and a cancellation. The series moves to La Salle (Ill.) Speedway Thursday for another $5,000-to-win event.

Looking for his first Summernationals victory, McKay Wenger will lead the 22-car starting field to green in tonight's 40-lap main event. Wenger drew the pole in a redraw among heat race winners while Rusty Schlenk, a two-time Summernationals winner, will start alongside him on the front row. Also looking to win his first series event, Jason Jaggers will start third with three-time series champion Shannon Babb starting fourth. ... Kevin Weaver's exit from the fourth heat race was due to a broken axle. His crew is working to make repairs. ... Brandon Sheppard's had to switch to his backup car after hot laps due to a blown engine in his primary car. The engine overheated during its last outing last week at Paducah, Sheppard said. ... There was a break in the program following the heat races to rework the track surface. ... Randy Korte will use a series provisional to the main event start from the 19th starting spot with Kevin Weaver using the UMP points provisional to start 20th. Track provisional Matt Taylor with start 21st with Jason McBride using the second series provisional to round out the 22-car starting field.

Rusty Schlenk powered around the top of the first corner to take the lead over polesitter Joseph Joiner on the opening lap of the fourth and final heat and cruised through the remaining distance. Fourth-starting Steve Sheppard Jr. rallied on the high side to finish second, while Joiner held third at the finish. Dewayne Kiefer topped Rich Bell in a late battle for the fourth and final transfer spot. The race was slowed with one lap complete when Bell and Adam Mefford tangled in turn one. Third-running Kevin Weaver pulled off under the caution.

Second-starting Jason Jaggers pulled ahead when polesitter Jason Perry got loose in the first corner and led every lap of the caution-free third heat. Fourth-starting Frank Heckenast Jr. also got by Perry on the opening lap and chased Jaggers the entire distance to finish second. Perry was third at the finish. while Mark Burgtorf topped a four-car battle for the fourth and final transfer spot.

Shannon Babb got the jump on polesitter Brian Shirley and cruised in the second 10-lap heat race. Babb built nearly a straightaway lead in the caution-free race, while Shirley was comfortably in second at the finish. Tanner English was was third, while Bobby Pierce topped Tyler Reddick in a back-and-forth battle for the fourth and final transfer position.

Second-starting McKay Wenger outdueled polesitter Brandon Sheppard early in the first 10-lap heat race and later turned back Ryan Unzicker's late challenge in leading every lap of the caution-free race. After moving by Sheppard on lap three, Unzicker pulled alongside Wenger exiting the final corner but couldn't pull ahead in settling for second. Sheppard was just behind the two leaders in third with Dustin Griffin grabbing the fourth and final transfer spot.

Shirley, the reigning series champion who’s only racing part time on this year’s month-long tour, will start from the pole of the second of four heat races coming up.

Series points leader Brandon Sheppard of New Berlin, Ill., recovered from a blown engine in his primary car during hot laps to post the fastest time in the first qualifying group, while Jason Perry of Payson, Ill., topped group three and Joseph Joiner of Milton, Fla., topped the fourth group. They’ll join Shirley in starting on the pole of their respective heat races.

Brandon Sheppard of New Berlin, Ill., continues to lead the series standings, but Bobby Pierce of Oakwood, Ill., continues to creep closer at 84 points back in second. After winning Tuesday’s event, three-time series champion Shannon Babb of Moweaqua, Ill., is third, 108 points out of the lead. Ryan Unzicker (-112) of El Paso, Ill., and Randy Korte (-247) round out the top five. ...With his victory Tuesday night at Quincy Raceway, Babb joined Sheppard as the only drivers to win multiple events on this year’s tour. Sheppard has four victories. ... Jacksonville is hosting its fifth Summernationals event. The tour first visited the track in 2006 through 2008 and returned again last season. ... Jason Feger of Bloomington, Ill., won last year’s event at Jacksonville in a thrilling race-long battle with Brandon Sheppard and Brian Shirley. ... Other former Summernationals winners at Jacksonville: Wes Steidinger, Kevin Weaver and Jeep Van Wormer.