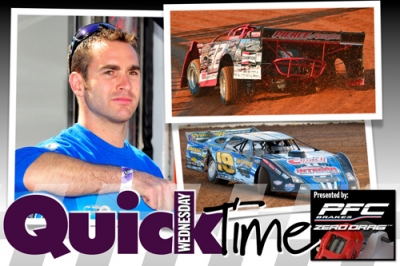 National: Is there any doubt? Josh Richards of Shinnston, W.Va., swept three World of Outlaws Late Model Series events at Lernerville Speedway’s Firecracker 100 for a $42,000 weekend in Sarver, Pa.

Regional: He’s had an up-and-down run on the Southern All Star circuit, but Jason Hiett of Lincoln, Ala., dominated a pair of unsanctioned events June 29-30, earning $3,000 apiece for victories at Fort Payne (Ala.) Motor Speedway and Rome (Ga.) Speedway.

Weekly: Joey Leavell of Waynesboro, Va., swept the June 28-29 at his home tracks, earning $1,500 for winning the Kyle Southern Memorial at Eastside Speedway and a regular-season event at Natural Bridge Speedway.

With the Fourth of July upon us, let’s take a break from the flurry of holiday racing to reset 2013 with a handful of mid-season honors. There’s still plenty of time for things to change, but here’s how the Dirt Late Model season is shaping up so far (with assistance from DirtonDirt.com staffer Andy Savary):

Top driver: Josh Richards is entrenched in the No. 1 spot in DirtonDirt.com’s Top 25 power rankings, and who am I to argue? While he hasn’t been a clear-cut pick over the first half of the season, his Firecracker 100 sweep gives the World of Outlaws points leader the mid-season edge over fellow WoO racer Darrell Lanigan, Lucas Oil Late Model Dirt Series points leader Jimmy Owens, and Shane Clanton, second to Richards in WoO points. The four haven’t outdistanced the field enough to keep another driver from swooping in during the second half of 2013, but those drivers will have to get in gear.

Breakout driver: Bobby Pierce of Oakwood, Ill., has been on the radar even as a pre-teen in Crate Late Models. Suddenly the maturing 16-year-old is in the conversation among the nation’s top Super Late Model drivers during a standout 2013 season. The second-generation driver and son of chassis builder Bob Pierce made his mark on the Lucas Oil circuit before moving on to battle for the UMP DIRTcar Summernationals title, where he clicked off a $10,000 victory in Lincoln, Ill. Honorable mention to Chris Simpson, the Oxford, Iowa, driver who notched his first $10,000 victory at the Summernationals stop at Tri-City Speedway in Pontoon Beach, Ill.

Top newcomer: No one stands out on a national level, but best among the regional newcomers is clearly Ryan Gustin of Marshalltown, Iowa, who tops the list of several modified standouts making the jump to Late Models in 2013. In limited full-fendered starts, the 22-year-old Gustin has victories with four sanctioning bodies, including a $3,700 triumph over nearly 50 entrants last weekend at I-80 Speedway’s Alphabet Soup Classic.

Most improved: Summernationals points leader Brandon Sheppard of New Berlin, Ill., tops this list in showing impressive consistency while trying to become the tour’s youngest champion. While he was uneven early in the season, he’s posted top-five finishes in all but three Summernationals races while logging back-to-back victories on two occasions. Honorable mention goes to Tony Jackson Jr. of Lebanon, Mo., who is on a streak of five victories over five weekends in Midwest regional action, as well as Eric Wells of Hazard, Ky., the leading World of Outlaws rookie contender.

Comeback driver: After going winless in 2011-12, four-time Lucas Oil Series champ Earl Pearson Jr. of Jacksonville, Fla., got back on track with a Florida Speedweeks victory on the circuit, then added another recently at Virginia’s Wythe Raceway. He’s sixth in series points but within 65 points of third place as the Bobby Labonte Racing team finally finds success in the in-house Longhorn Chassis. Honorable mention to Steve Casebolt of Richmond, Ind., the Spring Nationals champion driving for Tennessee-based D&R Motorsports, and on a local level, Darren Ackerman of Readlyn, Iowa, who battled back from colon cancer that kept him out of action in 2012 to grab a recent victory at Independence (Iowa) Motor Speedway.

Turn 2: The five stages of being lapped

I honestly don’t remember too much about my Psychology 100 class my freshman year at Western Kentucky University. Dr. Cunningham with the slicked back hair? The dreaded 8 a.m. time slot? Thick orange book with nondescript artwork on the cover? Every time I left the circular classroom building I briefly got lost?

But one thing I do remember — and probably every psych student remembers faintly — is Elisabeth Kubler-Ross and her five stages of grief. It was easy enough to learn for a multiple-choice test (Mr. Cunningham’s preference, as I recall), and even if you’re faced with the dreaded essay question, dredging through the memory banks for a list of five things wasn’t too bad (compared, for instance, to having to summarize Martin Luther’s 95 Theses that he supposedly hammered on the door of the Castle Church at Wittenberg some 500 years ago).

While watching video of a race recently, as a driver first clawed back to avoid being lapped, then slowed to let the leader race ahead, it struck me that a driver being lapped will — sometimes over a period of just a few seconds — go through those five stages of grief:

Denial: When the leader peaks his nose under, a driver’s first reaction might be: “Surely this isn’t happening to me?”

Anger: Realizing that getting lapped means a driver’s race is essentially over, that’s typically when the gas-mashing kicks in, and a driver slings his car wildly around the track in a desperate attempt to fend off the leaders.

Bargaining: "Please, please, please, I’d do anything is someone would spin to draw a caution flag, saving me from this fate?” a driver might think.

Depression: Being lapped can be a demoralizing end to the night. “Why am I even out here racing?” a driver might ask himself.

Acceptance: When it’s clear the leaders are faster, lapped drivers eventually come to terms with their lot and hold their line, making sure they don’t hamper oncoming cars pursuing the leader. “Just bring it home in one piece.”

Backstretch: A cherry on top

A non-qualifiers’ race is often an afterthought during a big-race weekend, lost in the fog, you might say. Well, the Uncle Sam 30 was exactly that — the last event of a grueling, rain-battered Firecracker 100 weekend at Lernerville Speedway, literally run amid fog draping the 4/10-mile oval.

But the race turned out to be about as entertaining as Dirt Late Model racing gets with winner Russ King and runner-up Boom Briggs, whose car nearly rolled over, furiously swapping the lead. Don’t just read about it. Check out the video and enjoy a $3,000-to-win race that matches up to any $30,000-to-win race you’ve ever witnessed.

The Dirt Late Model version of the motion picture Jerry Maguire, where Tom Cruise’s love interest Renee Zellweger answered his long-winded explanation of his desires with “You had me at hello.” At the racetrack, “you had me at ...”

July 3, 1988: Willy Kraft of Lakefield, Minn., won at Southern Iowa Speedway in Oskaloosa, Iowa, for the fourth of five victories during his title-winning season in the fourth and final season of the USAC Late Model tour.

July 3, 2004: Keith Hays, an up-and-coming Dirt Late Model racer from Morris, Ala., was killed at River Valley Raceway in Arkadelphia, Ala., when his car sailed over the banking and slammed full speed into a piece of heavy equipment more than 100 yards away. His throttle apparently hung; he was pronounced dead at the scene.

• One of the Lucas Oil Late Model Dirt Series winners July 3-4 in Ohio at Muskingum County Speedway or Portsmouth Raceway Park will win again elsewhere before the weekend is over.

• At least one home-state driver will finish among the top three in the Wild West Tour opener for the World of Outlaws Late Model Series at Amsoil Speedway in Superior, Wis.

• Brothers Chad and Chris Simpson will both nab victories.

• There will be at least three first-time series winners during the extended Fourth of July weekend.

• Brian Harris of Davenport, Iowa, will start another streak on the Deery Brothers Summer Series.