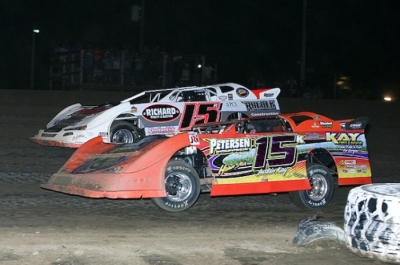 INDEPENDENCE, Iowa (July 2) – It’s a safe bet that most people had their money on the No. 15 making its way to victory lane Tuesday night at Independence Motor Speedway.

Brian Harris, the winner of the last four events in the Deery Brothers Summer Series for IMCA Late Models, was looking to become the first driver in tour history to win five straight in his No. 15R. When the Davenport, Iowa, driver drew the pole for the 50-lap feature, things appeared to be in his favor. Justin Kay of Wheatland, Iowa, had other thoughts and made it known that his No. 15K was the car to beat. | Slideshow

Harris led at the drop of the green with Rick Dralle and Jeff Aikey in pursuit. The top three ran in that order until Aikey raced the low side past Dralle on lap eight. By the time Aikey made his way into the runner-up spot, Harris built a sizable lead despite losing his power steering just a few laps into the race.

Aikey worked the low groove in both sets of turns as he chipped away at the deficit. He pulled even with Harris and nosed ahead for the lead on the 21st lap before Harris regained the top spot a lap later.

While the leaders battled, Kay made his way past Dralle and Tyler Bruening for third. He reeled in Aikey just past the midway point, making the pass for second on lap 27. Kay then chased down Harris and pulled even with the leader on the 29th circuit before powering ahead one lap later.

Kay quickly pulled away from the pack and built a straightaway lead while he made his way through lapped traffic. He ran unchallenged the rest of the way to score his first tour win by nearly a straightaway ahead of Harris.

"The first few laps I was just hanging out on the top following those guys. I wasn't gaining anything. I was losing ground so I figured I'd move to the bottom and it came together," Kay said. "The car's been really good the last two weeks here."

Aikey, of Waterloo, Iowa, was third followed by Bruening, the Decorah, Iowa, driver with five regular-season victories at Independence this season. Callahan, of Dubuque, Iowa, completed the top five five.